The singer also slammed Trump for protecting the police while targeting protestors during the Black Lives Matter movement. 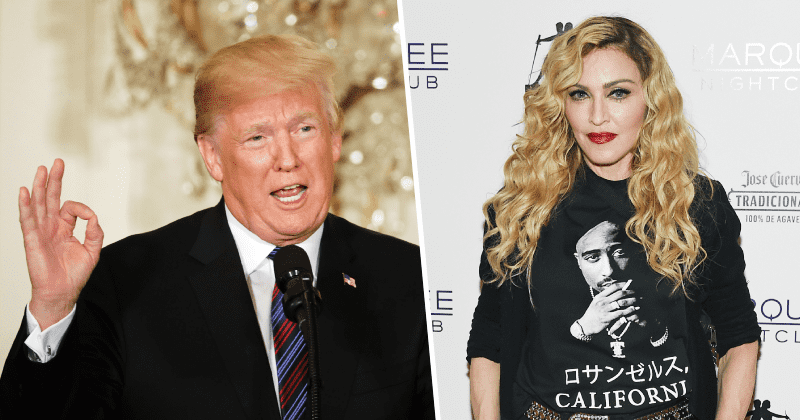 Madonna slammed Trump and called him a "nazi sociopath" as she revealed that she was backing Joe Biden President in the upcoming November elections. The singer and actor pulled no punches as she called out Trump over multiple issues including his poor handling of the coronavirus pandemic and the Black Lives Matter movement. Madonna shared a video of Trump stating, at his Tulsa rally, that he ordered officials to slow down testing to hide the high coronavirus cases. "If we stop testing right now, we’d have very few cases, if any,” said Trump, at the BOK center. "When you do testing to that extent, you’re gonna find more people, you’re gonna find more cases. So I said to my people slow the testing down.” Maddona wrote on the Instagram video, "Let's slow down testing of Coronavirus in America because the numbers of people testing positive are getting too high for Trump to deal with."

The singer also made it evident that she was backing Joe Biden for President. Invoking Trump's nickname for Biden, she said, "I'll take 'Sleepy' Joe Biden any day over this White Supremacist Aka/ Nazi Aka Sociopath that's in The WHITE HOUSE! Time to Wake Up." She also pointed out the hypocrisy of the justice system after Trump threatened jail time to those who burned the American flag. Trump claimed that he had a discussion with Senators about passing legislation to ensure jail time for those who desecrate the flag. "Let's make it a law for anyone who burns the flag to go to jail for one year but let's have no law or reform or consequences put in place for Police officers who shoot and kill black victims for no reason!! Finally, Trump is upset about George Washington's image being desecrated even though George Washington owned Slaves!!" wrote Madonna.

On Tuesday, Trump threatened to jail those vandalizing and tearing down statues on federal ground. President Donald Trump tweeted: Numerous people arrested in D.C. for the disgraceful vandalism, in Lafayette Park, of the magnificent Statue of Andrew Jackson, in addition to the exterior defacing of St. John’s Church across the street. 10 years in prison under the Veteran’s Memorial Preservation Act. Beware! He also labeled protestors as hoodlums and anarchists. "They’re bad people, they don’t love our country, and they’re not taking down our monuments," said Trump reported NBC News.

Madonna has never been a great fan of the President. Last year, she made a reference to Trump's genitalia during her tour opener at Brooklyn Academy of Music. Madonna was simulating a sex act on herself when she joked with the audience. "What do you call a man with a small penis? Donald Trump," said Madonna as she burst out laughing. She called him a "classic alpha male" who bullies others to compensate for his insecurity in an interview with The New York Magazine, last year. "They’re overcompensating for how insecure they feel. A man who is secure with himself, a human who is secure with themselves, doesn’t have to go around bullying people all the time," said Madonna.

The singer also recalled the night of the 2016 election results in an interview with Harper Bazaar. "It was just like watching a horror show. I was reading from the Zohar. We were doing everything: lighting candles, meditating, praying, offering our lives to God forever, if only. I went to sleep, and since that night, I wake up every morning and it's like when you break up with somebody who has really broken your heart. Every morning, I wake up and I go, "Wait a second. Donald Trump is the president. It's not a bad dream. It really happened." It's like being dumped by a lover and also being stuck in a nightmare, said Madonna.