Before lifting her skirt, Madonna admitted, "I like to freak you [Jimmy Fallon] out and make you think I'm going to do something crazy." 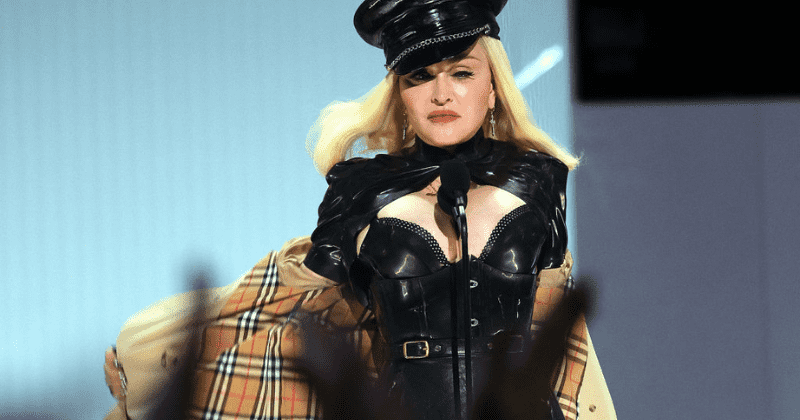 Madonna left viewers stunned after flashing her butt during a recent interview with Jimmy Fallon. The pop icon arrived on The Tonight Show to promote her new tour documentary (which chronicles the singer's 2019-2020 tour) Madame X, when things went "off the rail," according to the talk show's YouTube. Before talking to Madonna, show's host Fallon told the audience how "Madonna's been on the show many times and she never does anything that we plan." He also admitted, "We can go over all the questions, and then she comes out and says something else and takes over the show and it's nerve-wracking for me."

Agreeing with Fallon, the 63-year-old said, "I like to freak you out and make you think I'm going to do something crazy." Pointing at his desk, she shared, "Like, I just want to shove everything off of it and lay on it," and Fallon readily invited her to have at it. "Shove, shove," he said according to The Sun. "Seriously? I'll do it. Maybe later, you're expecting it now," she noted. Now the conversation that ultimately led to to the bum-flashing incident had no connection with it whatsoever. Madonna revealed that writer and Civil Rights activist James Baldwin had greatly influenced her work.

"[H]e was a great source of inspiration for the show. And one of the things I quote over and over again in the show is that 'artists are here to disturb the peace,'" she shared before joking, "And so I hope that I have disturbed not only your peace this afternoon, but... people's peace while they watch the show--but I mean that in the best way." To this, Fallon responded with a quote from late Democratic Congressman John Lewis saying, "Yeah, you get in good trouble." Madonna nodded in agreement before launching herself across Fallon's desk once again proving his point in the most chaotic way possible.

The 47-year-old host was then seen jumping out of his seat almost immediately before taking off his jacket to cover her. The Material Girl singer gets off the table and just as we thought the show was over, she exclaimed, "Nobody's gonna see anything!" and flashed her butt at the viewers on her way back to her seat. Madonna is known for her boundary-breaking career which is filled with provocative stunts that are mostly sexual in nature. Thus, her recent butt flash wasn't exactly out of character and many just loved her energy.

"I feel like when God made Madonna a good trouble kinda girl She did it for my happiness ALONE. — Madonna on The Tonight Show Starring Jimmy Fallon, October 7, 2021," wrote one user. But there were some who ended up criticizing her, especially due to her age.  "Unpopular Opinion: I know you say that one can be sexy at any age but, to me, 63yo Madonna humping Fallon's desk was just embarrassing. Sorry," noted user @RickWrightNow. "Madonna is on Jimmy Fallon. She's had so much work done she looks like a wax figure. Be thankful for the wrinkles and the privilege to grow older," shared another @CRAllenTX.

Body positivity & inclusivity has come a long way but it’s clear we have so much further to go. I have seen so much #ageism and body-shaming about Madonna. I hope we can evolve. #RespectMadonna 🌹

Others responded to the harsh comments that targeted the singer's appearance and her age. "Late to this but I watched Madonna’s Jimmy Fallon interview and thought she was fabulous as ever. Her whole career she’s had to put up with sexism and now ageism. Her '15 minutes of fame' are not over as some silly commenter said. She’s Madonna. Learn your history," slammed New York Times best-selling author and award-winning journalist Nancy Jo Sales. "The sexism and ageism are so hardcore with her. She’s also been treated incredibly disrespectfully throughout her entire career. Even now," wrote comedian and actress Kathy Griffin. Madonna has been long criticized for her provocative work but despite this, she remains one of the best-selling female recording artists of all time. She even ranked fifth right behind artists like Michael Jackson, Elton John, The Beatles, and Elvis Presley for being the highest-selling artist.

Madonna had surgery, has triumphantly returned to performing.

You celebrated Mick Jagger snaking around on stage with Taylor.