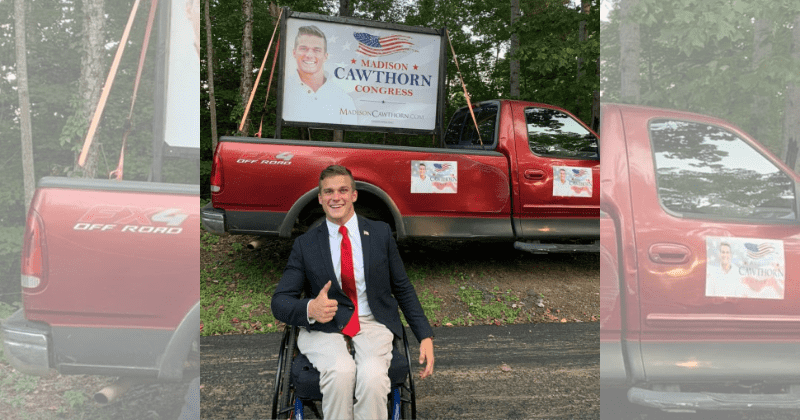 Madison Cawthorn, the 25-year-old Republican candidate, defeated his 62-year-old Democratic opponent, Moe Davis in North Carolina on Tuesday. After winning his House race, Cawthorn will become the youngest member of Congress. Cawthorn has been in a wheelchair after a car crash left him paralyzed at the age of 18. Cawthorn’s campaign told PEOPLE that the young incoming lawmaker responded “ecstatically” after learning the results.“This election showed that we’re a divided people,” Cawthorn said in a statement. “Americans are hungry for leadership that appeals to our highest aspirations, and that’s precisely what I intend to do.” On Tuesday night, he tweeted: Cry more, lib.  This was his first social media statement after the AP called his victory.

From the bottom of my heart, Thank you.

All glory goes to God and I am excited to serve each and every member of this district. Thank you! pic.twitter.com/oFnizpzqVa

According to HuffPost, the 25-year-old won the North Carolina seat once held by White House Chief of Staff, Mark Meadows. Cawthorn’s campaign also came up with a statement calling out Rep. Alexandria Ocasio-Cortez. AOC is currently the youngest member of Congress at age 31 and it was her rise that inspired Cawthorn to run, he had previously mentioned. “The days of AOC and the far left misleading the next generation of Americans are numbered,” Cawthorn said in a statement about his win. “Tonight, the voters of Western North Carolina chose to stand for freedom and a new generation of leadership in Washington.”

Cawthorn's campaign has had its share of controversy including sexual misconduct allegations. According to Citizen-Times, a woman named Katrina Krulika shared her account of a date with Cawthorn six years ago. She felt she had a moral obligation to share her story. During the date, she described she felt pressured because of Cawthorn's advances. “He was much stronger than me,” she stated. “I recall being so startled, that as he tried to grab me and I attempted to pull away, my hair was pulled instead and I got stuck in his chair. I had to yank out some of my own hair just to free myself. I never went out with Madison Cawthorn again.” According to HuffPost, Cawthorn responded by saying the allegation was politically motivated and that while he acknowledged that the incident happened, he claims he was acting “just in a flirtatious way.” Cawthorn has also made strange comments about Hitler, referring to the evil dictator as “the Fuhrer”  and has described his visit to Hitler’s vacation home as a trip on his own “bucket list.”

The kid that vacationed at the EAGLES NEST, where HITLER vacationed?

The social media posts have now been deleted. He addressed the backlash tweeting: When our soldiers were photographed at the Eagle’s Nest in 1945 they were clearly celebrating the Allies triumph over one of the greatest evils in human history. They weren’t celebrating evil; they were celebrating their victory over evil. I don’t cower to the mob. The new Republican Party that I represent will fight back against liberal lies. The media outlet noted that the young politician's stand on policies seems weak as well. He seems more focused on disagreeing with Democrats on issues like the Green New Deal and “Medicare for All”. He is also anti-abortion, pro-border walls, and a Trump supporter. In an interview with The New York Times shortly after he won his primary, Cawthorn said, “I believe I can carry the message of conservatism in a way that doesn’t seem so abrasive — that has better packaging, I would say, better messaging.” But his tweet that said “Cry more, lib,” might be proving otherwise.

Wow this is a mature response you would want to see from a Rep.