Lyft, the cab hailing company, said it has banned the passenger from the platform. 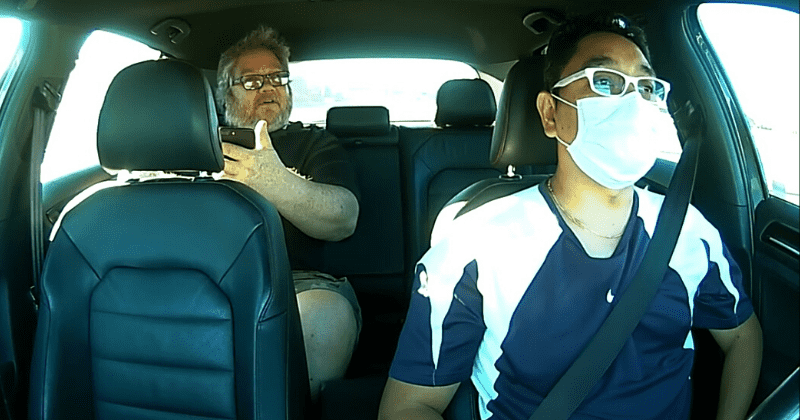 A Lyft driver bore the brunt of a racist verbal attack after he asked a passenger to wear a mask. The six-minute interaction that was captured on a camera installed in the car showed the passenger mocking the Latino driver's accent besides also threatening to physically harm him. He also used a homophobic slur against him.  The incident took place in Reno, Nevada. The video shows the driver putting on a mask just as he pulls up near the passenger. When he gets in, he does not have a mask on and a concerned driver asks him if he has one. The passenger replies he does not. “Do you believe in that s**t?” the passenger said, referring to coronavirus prevention measures initiated by the government and the disease itself. The driver said he does since he had a "family that is sick of that.” The passenger then goes on complaining under his breath.

The guy thinks he can be racist and still expects a ride... umm no.

Amazing how stupid Americans are.If you're getting into someone's car respect their rules. Many of Americans feel entitled of this so called "Free" no respect no shirt no mask policy. why bother riding into a car without a seatbelt

The passenger said the car belongs to Lyft, probably ignorant that the cabs are the property of drivers while it is only their services that are for hire. The driver stops and does not move and asks him to take the matter with Lyft if he wanted to. He is not about to move and tells the passenger he had been "disrespectful." Not seeing a way out of the situation, the passenger starts calling the driver “a candy-a** fa***t with white glasses” and a "f**king wet***k" a racial slur that is often used towards Latinos in the US. He even asked the driver, “Where are you from, boy?” to which the driver asks him the same.  The passenger says he is from "America"  and the driver tells him he is American too and that this was his country as well. But the passenger does not believe him and mocks his English.

Yeah may want to step out with keys first... oh you mean th cops may kill the Driver, good point!!

Amongst other issues in this video...

The passenger asks him condescendingly, “You ever take English class?.”  He later adds,  “I could f**cking crush your skull right now.” The driver finally asked the passenger to get out lest he calls the police. He gets out grudgingly and says he will lodge a complaint with the cab company. TMZ asked Lyft about the incident and a company representative said they had banned the rider from the platform. They also said they had got in touch with the driver and were working with him to make sure that he was doing alright. The company representative added, "The behavior shown by the rider in this video is despicable and has no place on the Lyft platform. Lyft is committed to maintaining an inclusive and welcoming community, and discrimination is not tolerated."