Boncuk, the dog, was fed and cared for by the hospital staff as she waited outside window of its human owner. 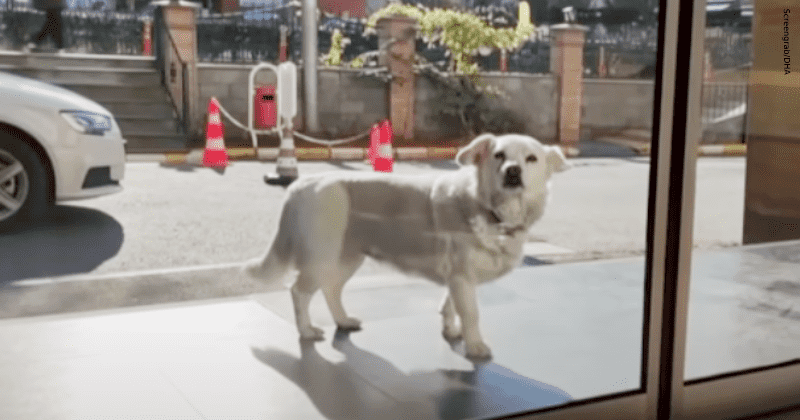 It's not for no reason that they say a dog is man's best friend. Cemal Şentürk found out first hand when he was admitted to Medical Park Hospital in Trabzon on January 14. His dog, Boncuk, escaped their apartment and followed the ambulance that took Cemal Şentürk to the hospital and she waited outside the facility for six days for her caretaker Şentürk's recovery. The incident happened in northeastern Turkey. Cemal Şentürk's family members were alerted that the dog was waiting outside the hospital for him and they took her back home. To their surprise, she found a way to escape again and waited outside the hospital, and did so every day for six days until Senturk was discharged, said Murat Ercan, the hospital's international patient center director, reported CNN. The canine has been Şentürk's companion for over nine years now.

Cemal Şentürk's family couldn't figure out how their dog Boncuk (meaning 'Bead') was escaping to head to the hospital, which is nearby their apartment. "His dog 'Boncuk' has followed him to the hospital gate and refused to leave for six days until her owner was discharged," said Ercan. "Even though the family (took) Boncuk back home she managed to escape every day to wait at the hospital gate." Boncuk, the dog, was clearly worried about her caretaker. While Cemal Şentürk, who was undergoing treatment, couldn't meet her, he reassured and comforted her through the window during his stay at the Medical Park Hospital in Trabzon. Şentürk egged his canine partner to head back home but she simply wouldn't leave the hospital while he was still in it.

She did make new friends at the hospital with staff feeding and taking care of Boncuk, said Ercan. "Cemal Şentürk has been with Boncuk for nine years and he also stated that he missed her a lot during his stay at the hospital. After he was cleared to go out he met his dog at the hospital gate. Boncuk has behaved really sweet during the six days and has managed to capture the love and affection of the whole staff." Cemal Şentürk was lifted seeing his companion outside his window. He'd often call her name and wave at her.

Şentürk’s daughter Aynur Egeli confirmed that Boncuk was kept under "house arrest" every night when she returned but only for her to escape and be by her father's side the next morning. She carried on with this routine for the six days that Şentürk was hospitalized. “The dog comes here every day at around 9 in the morning, waits until the evening, and then leaves. She never comes inside, but waits for her owner [outside],” hospital security guard, Muhammet Akdeniz, told Turkish news agency DHA.

Visitor restrictions forced the suspension of a therapy dog program @UHRainbowBabies, but Melana, the full-time service dog, was ready to jump into action.

"When the work vest is on, her focus is solely on patients." https://t.co/zfFwT2C9fv pic.twitter.com/HBcbL6nSLV

Boncuk's dogged determination to wait for Şentürk ended after six days when he was finally discharged from the hospital, his loving companion was waiting outside, wagging her tail and unable to contain her joy. Murat Ercan said the dog captured the hearts of the staff at the hospital and was extremely well behaved. “I missed her too, constantly,” said en emotional Şentürk. [“Dogs] bring joy… They provide companionship just like humans — and they make people happy.” There's nothing quite the love of the pet.