The letter was written to Mary Pinchot Meyer, Kennedy's alleged mistress who was mysteriously murdered a year after JFK's assassination. 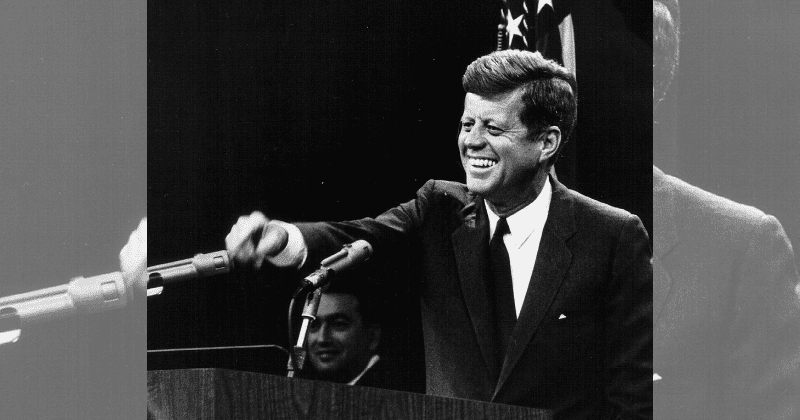 John F Kennedy is fondly remembered as one of the most admired Presidents to have set foot into the White House. Kennedy was also popular for ushering in a new, youthful spirit into the world of politics alongside his wife Jacqueline. The two quickly became an iconic couple as people deemed them a perfect match, however, the reality of their marriage was far from it. Although it wasn't extensively reported at the time, JFK was believed to have numerous affairs throughout his ten-year marriage to Jackie. "If I don’t have sex every day, I get a headache," he reportedly said, according to the New York Post.

Although there wasn't much proof of it, a handwritten love letter from the former President surfaced in an online auction. The letter, which was introduced from Boston's RR Auction, was addressed to his alleged mistress Mary Pinchot Meyer, according to PEOPLE. "Why don’t you leave suburbia for once – come and see me – either here – or at the Cape next week or in Boston the 19th," read the four-page letter written by JFK. "I know it is unwise, irrational, and that you may hate it – on the other hand you may not – and I will love it."

He continued, "You say that it is good for me not to get what I want. After all of these years – you should give me a more loving answer than that. Why don’t you just say yes." The note, which was believed to be in the possession of Kennedy's secretary Evelyn Lincoln, was reportedly signed with a simple "J." Valued at $30,000, the letter was said to be written a month before JFK was assassinated in 1963 and thus was never sent out. Describing the item, RR auction spokesperson Bobby Livingston said, "There’s a playfulness to him in the letter that you don’t see in JFK’s other correspondence." He continued, "He is always quite reserved in his correspondence."

Meyer and her former CIA agent husband Cord Meyer were quite close to JFK and his wife Jackie, when Kennedy was still a Senator. But according to PEOPLE, Meyer knew the former President in high school as well. Shortly after Kennedy's assassination, the socialite divorcee too was found dead in Georgetown on October 1964, just a year after the letter was written by Kennedy. To this day, her murder remains a mystery, according to Daily Mail. Another letter written by JFK's rumoured mistress Igna Arvad surfaced during that time and was estimated to be sold for $6,000.

Back in 1943, a suspected Nazi spy sent Kennedy a typed letter asking for an interview. "After all you can’t turn me down, can you? … I will, if necessary fly to San Francisco – and all for business..." it read. The Washington Times-Herald writer becomes more personal with the former POTUS, whom she met when he was just 24. "I don’t quite know what to write to you Jack dear, because if I follow my heart – it will be a love letter, and if I don’t, it will be stiff as an old poket [sic]. But you know me, I am on pins and needles, because I know you will be home soon. You do know – or don’t you – that you are the person in this world I would rather see than anybody – or is that a little too much of an admission?"

Eventually, Arvad grew sentimental as she recalled seeing a picture of him and a copy of his 1940 book Why England Slept. "I am sunk when I look at it too long," she wrote of the photograph. "I promise to read it right off, and not stop till I get through – even if I die doing it." It was revealed in Barbara Leaming’s biography, Kick Kennedy, that JFK and Arvad tried to keep their affair secret as she was married at the time. However, after Kennedy's father learned about it, he "went into overdrive to end the affair."