Shane Michael Mitchell, 30, was seen lifting the dog up by its leash and choking it in a clip from a doorbell camera. He was arrested and charged with animal cruelty 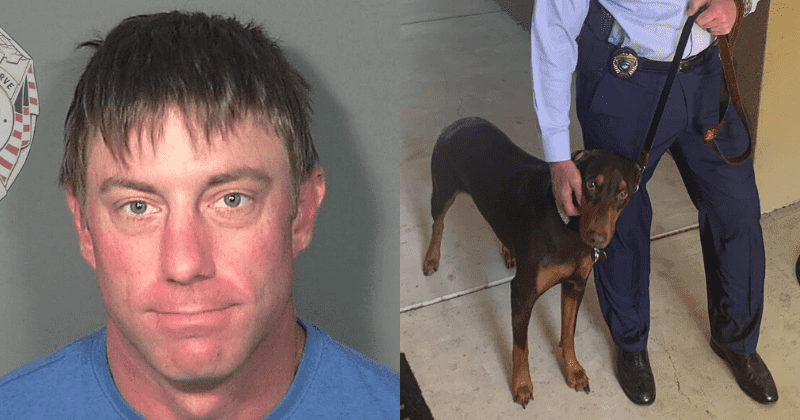 A Louisiana man was seen choking his estranged girlfriend's dog in a clip from a doorbell camera.  He has been arrested and charged with animal cruelty.  Shane Michael Mitchell, a 30-year-old man from Arnaudville, got into an argument with his girlfriend and was seen standing just outside her door with the dog named Rubyjean. In anger, he lifted the dog up by the collar, thereby choking it. It is not exactly known just as yet how the man got hold of the dog in the first place. The police were notified of the cruelty and arrested the man a day after the incident that took place on Sunday at an apartment complex on Spartan Drive area. Deputies from the Sidell Police Department arrested Mitchell from his house. The dog was also taken from him and returned to its rightful owner.

According to a post on Slidell Police's Facebook page, they "were notified early Monday morning and immediately opened an investigation into the matter." With crucial video evidence, Slidell Police detectives secured an arrest warrant for Mitchell. "A court order was also secured ordering the canine, Rubyjean, back to her rightful owner," the post added. Mitchell may have learned that the police were looking for him because the post said that "investigators received information that Mitchell may have been at an apartment complex in Slidell or fled to the Baton Rouge area." He gave the authorities some trouble before he was eventually found. "Mitchell refused to cooperate with authorities, so several undercover detectives set up surveillance in an attempt to locate Mitchell." He was finally tracked to an apartment complex on Oak Harbor Boulevard at around 11 a.m on Monday.

Thereafter, he was taken into custody. Rubyjean was also soon located and found safe. She was then given back to her owner. Randy Fandal, Slidell Police Chief expressed his anger at the case of animal cruelty and said, "I was sick to my stomach watching that video. How someone can do hurt a defenseless animal is beyond me." Speaking about his meeting with the pet, Fandal said, "I had the opportunity to meet Rubyjean this afternoon, and she was as sweet and well-mannered as could be. We are glad this had a happy ending for both the dog and her owner." Mitchell is currently being held at the Slidell City Jail.  The department said an investigation is ongoing, and additional charges may be filed in reference to other incidents.

People were relieved to find out that the dog was safe, but was livid with Mitchell's actions. Rita Clark wrote: Thank you! I hope that he gets enough punishment to wipe that smirk off his face! So glad you got him and that you got the dog away from him. Rob Henry commented on the Sidell Police department's post saying: That animal will never live up to her potential because of this it's always there glad she is safe give her extra attention God bless never mentioned abuser because not worthy proved that. Others like Heather Brewer rued: Sadly probably won’t get much jail time since animals aren’t deemed as important. They should choke him out for a while. Jan N Winston Johnson noted: Would love to see him choked in the same manner. A little street justice would have been nice, but jail will have to do.

We had reported a similar incident last year when a man in Palo Alto was caught on camera slamming a pooch repeatedly on the ground by its leash while he filmed the horrific act on his camera. The man, identified as 30-year-old Micheal Fore, was unaware that a security camera nearby had caught the entire abuse. He was seen pulling the dog by its leash and then disturbingly swinging it into the air. He then slammed the dog with great force to the ground repeatedly. He was charged with felony animal cruelty.