Louis, The Three-Yr-Old Dog Blinded By His Owners, Has Finally Found A Loving Forever Home

The dog was also nursing a major injury besides being blinded after he being hit during a car accident. 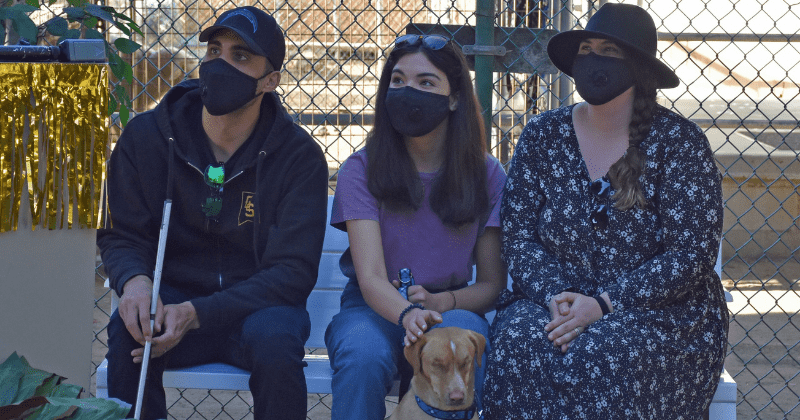 It looks as though things have begun to turn around for little Louis, the three-year-old Labrador-Shepherd who was blinded by his neglectful owners, as they refused to have his infection treated. But, nearly a week after a public plea by Helen Woodward Animal Center, his rescuers, the canine has found a forever home. According to PEOPLE, a marine veteran and his family have stepped up and adopted the dog and given him a loving home in which he can flourish.

On Friday, Steve Walker, his wife Kacey Walker, and their daughter Jordan emerged as the frontrunners to take Louis home among hundreds of others who had filed applications to adopt the dog. The report suggests that the animal center deliberated on their decision for long periods before finally awarding ownership to the Walker family based on a number of factors. For starters, the family is from the San Diego area, where the animal center is located, which allows Louis an easy and quick transition to his new home. Also, Mr. Walker, like the pup, is visually impaired and the family residence is already outfitted with all the bells and whistles to accommodate a blind dog including a one-story layout and pocket doors, one of which was already a prerequisite for people looking to adopt Louis.

WATCH: Meet Louis. The lab/shepherd mix was neglected by his previous owners, according to the Helen Woodward Animal Center.

But now, he's about to join a new family! Learn more about his journey: https://t.co/rFoSDuwC38. pic.twitter.com/kduOYijJsS

Once Louis makes the transition, he will be partnered by two other rescue pups already staying in the Walker household. In a statement about the dog's adoption, Jordan said: "Our pets are so loved and spoiled. We just know that Louis is going to be the perfect addition to our pack." The animal center feels that Louis would thrive in his new home as he can take inspiration from his new owner who has had to overcome tons of odds to become a self-reliant man. The armed forces veteran began losing sight at just 18 owing to a rare eye disease called Retinitis Pigmentosa. While most cower and give up under such circumstances, Mr. Walker persevered and even began to compete regularly in marathons and triathlons.

Need #MondayMotivation? Blind pup Louis was brought to @HWAC in December with a broken leg that had never healed right. Marine dad Steve Walker, also blind, heard his story - now Louis has a loving home! Adoption stories don’t get any better than this. 🐶https://t.co/vDiQ0bLhha

Louis' story first began to gather steam last week when several outlets covered the acrimonious circumstances he had to live in. Not only did they leave an eye infection untreated, which led to his blindness; they also didn't pay any heed to an injury that was caused by a car accident. When they realized they no longer had the patience to take care of a blind dog, the owners left him at a pound shop from where he was eventually rescued. Speaking about the dog, Hella Tyler, Adoptions Director at Helen Woodward Animal Center, had said: "It is incredibly important that people who consider getting a pet know the obligations they take on with these animals. When people get their pets for free off of Craigslist, they don't seem to realize that pets come with responsibilities and a monthly expense for their caretaking, including medical care. In turn, these pets will provide their owners with unparalleled love. They pay it back tenfold. It's just devastating to see an animal treated the way Louis was treated."

Meet Louis' new family, the Walkers! Not only do they have a rescue #bulldog & #rescuebunny, but their home also accommodates blindness as the father lost his eyesight (like Louis) due to a rare eye disease. Read more about Louis' new family >> https://t.co/ApgXa7hj3c pic.twitter.com/91gQcia6ND

To sweeten the deal for prospective owners, the center had also waived off the fees and even offered "one year of veterinary services and 10 sessions of training services from San Diego Pet Training; a $500 Petco Gift Card and a Subaru Loves Pets Adoption Kit from Frank Subaru: an original artwork print of Louis created by an Instagram Louis-fan named Erika Ho; two bags of Blue Buffalo Pet Food; and a card signed by the entire staff who worked with the sweet pup at Helen Woodward Animal Center," the animal center shared in their release announcing Louis' adoption.