trending celebrity people lifestyle news animals
Live Turtles, Lizards Sold As Keychains In China, And The Government Is Doing Nothing About It

Live Turtles, Lizards Sold As Keychains In China, And The Government Is Doing Nothing About It

A minimum amount of nutrients and oxygen are given to these creatures who are kept in a tiny prison, just enough to keep them alive. Several petitions have been started to end this cruel trend but there are no laws to protect these animals as of now. 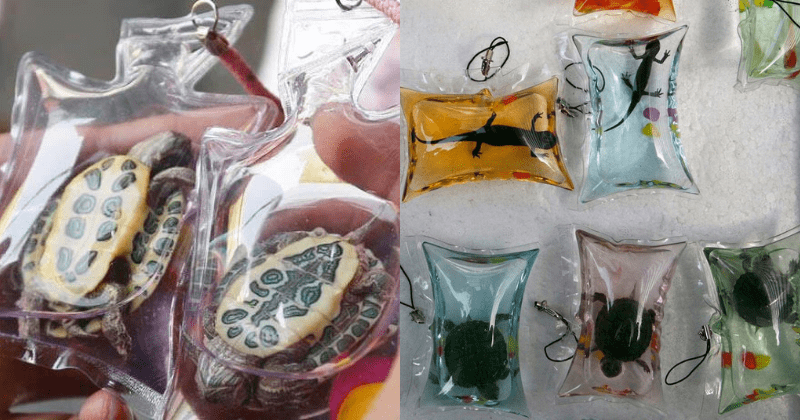 A cruel trend of selling live animals such as baby turtles, lizards, snakes and fishes inside tiny plastic bags as keychains and trinkets have emerged in China that is worrying animal rights activists and animal lovers. While it is not exactly known when this cruel trend emerged, PETA has suggested this has been going on since 2008 when China hosted the Olympics. These were sold to tourists for as little as $1.25 and has been going strong since. The sight of these tiny creatures struggling while trapped in their small spaces and given just the right amount of nutrients and oxygen to just survive is nothing short of torture.  All this just for the amusement for the buyer for a little time after which they are likely to discard it.

What's worse is that there is nothing that can be done as per the rules and regulations of the country primarily because there are none to protect these creatures. Only animals in the wild come within the ambit of the government's rules. Thus, these creatures have to suffer till the time the government brings in some kind of laws.

Qin Xiaona, director of Capital Animal Welfare Association, an NGO that works for animal welfare and their rights further confirmed that helplessness of organizations like his. He said they were still legal because these creatures do not fall under the classification of wild animals. He added, “China only has a Wild Animal Protection Law. If the animals are not wild animals they fall outside the law’s scope.”

Since the sale of these trinkets became widespread, a number of petitions to end the practice were started. One petition highlighted that "the living keychains containing  Brazilian turtles or kingfish swimming in colored water are considered good-luck charms by many Chinese, but animal protection groups are outraged and call them a perfect example of “pure animal abuse”. The petition garnered the support of 116,611 people.

Mary Peng, co-founder of the International Center for Veterinary Services, who also signed the petition said that the creatures "couldn’t survive in the sealed bag for very long, due to lack of oxygen." Once bought, the life of the pet depends on whether they are released from captivity or forgotten in some corner and left to die.  In most cases, it's the latter that takes place.

As per The Star Online, Professor Sam Walton, an ecohydrology expert and former research lecturer at Universiti Malaysia Terengganu claimed that it is not just a lack of oxygen and food that will kill the animals.  There are other factors involved. He explained, "There might be enough oxygen and food in the plastic casing but the animal waste from digestion and respiration is toxic and will kill them. They essentially poison themselves with ammonia."

Another petition titled, 'Put a Stop to Live Animals in Keychains and Mobile Phone Trinkets in China!' was liked 1.7 million times. Despite these efforts by the public, the practice has been going on unabated and there is little news about the government even planning on doing anything. According to PETA's Lyndsey Wright, the practice "are a form of extreme cruelty.” Lindsey added, "These key chains provide no way to feed the animals and no way for them to breathe. Fish and turtles, they both need oxygen to breathe."

She added, "No matter what these vendors are telling people about the water, these animals are bound to die in a matter of days if not hours after people take them home. Being sealed in a tiny plastic bag full of water and jostled around would be terrifying for any animal, but especially for one of these sensitive turtles if they turn out to be red sliders.”