Lions Found Napping On The Roads During Lockdown In South Africa

Animals world over are exploring and navigating human-occupied spaces in the wake of the Coronavirus outbreak. 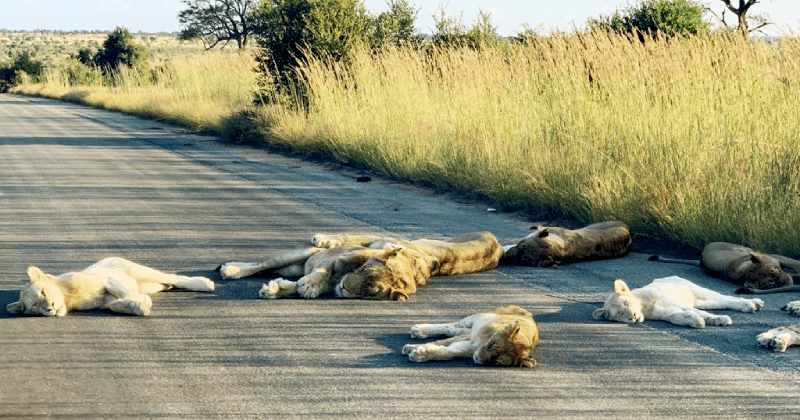 With humans retreating to their own homes because of the Coronavirus pandemic, animals are slowly stepping out into human-occupied areas and making themselves at home. To be fair, it's humans who had encroached upon their habitats and driven them into smaller spaces. It's one of the few positives that have come out of the virus outbreak. Now, in South Africa, lions seem to be thriving without humans around. A new set of photos from South Africa's Kruger National Park show lions relaxing on the roads with little to worry about, reported CNN.

Kruger visitors that tourists do not normally see. #SALockdown This lion pride are usually resident on Kempiana Contractual Park, an area Kruger tourists do not see. This afternoon they were lying on the tar road just outside of Orpen Rest Camp.
📸Section Ranger Richard Sowry pic.twitter.com/jFUBAWvmsA

The images captured by a park ranger and photographer Richard Sowry show a pride of lions soaking up the sunlight on the tar road, not in the least bothered by the presence of Sowry. The park ranger was able to get up close and capture the beautiful picture. He said that it was unusual for this particular pride to be seen anywhere outside of the Kempiana Contractual Park, an area not accessible to tourists. Within a few weeks of tourists not visiting Kruger National Park, lions are stepping out of their safe zones and exploring other areas. The pictures taken by Richard Sowry was shared by the National park on Twitter, writing: This lion pride is usually resident on Kempiana Contractual Park, an area Kruger tourists do not see. This afternoon they were lying on the tar road just outside of Orpen Rest Camp. "Lions are used to people in vehicles. All animals have much more of an instinctive fear of people on foot, so if I had walked up they would never have allowed me to get so close," said Richard Sowry, reported BBC.

On any given day, South Africa's Kruger National Park is busy with tourists, but the park has been shut down since March 25 as part of South Africa's nationwide lockdown to limit the spread of the Coronavirus. Kruger National Park embraced the new guidelines to protect people and animals. "We would like to thank the public for their on-going support in line with the government's strategy to mitigate the impact of COVID 19, we all have an obligation to flatten the curve," SANParks CEO Fundisile Mketeni said in the statement. The park's spokesman Isaac Phaahla spoke to CNN who said that it's unusual for lions to be lounging on the road as casually as this. "Lying on the road during the daytime is unusual because under normal circumstances there would be traffic and that pushes them into the bush," said Isaac Phaahla.

Kruger visitors that tourists do not normally see. #SALockdown This lion pride are usually resident on Kempiana Contractual Park, an area Kruger tourists do not see. This afternoon they were lying on the tar road just outside of Orpen Rest Camp.
📸Section Ranger Richard Sowry pic.twitter.com/jFUBAWvmsA

Phaahla claimed that it was an exaggeration to say that there have been significant changes in animal behavior over the past two weeks, but added that without the buzz of tourists, wildlife was more active. "They just occupy places that they would normally shun when there are tourists. People should remember that KNP is still a largely wild area and in the absence of humans, wildlife is more active." While tourists are banned from visiting the park, a small workforce continues to be in operation to help with sustaining the park and its animals, including food delivery, fuel provision, security, and emergency services as well as wildlife crime operations. Rhino poaching has gone down during the lockdown period. “This could be attributed to the dedication of the essential staff who are on high alert in the Kruger Park, all other national parks, as well as provincial and municipal game reserves,” said Barbara Creecy, South Africa's Minister of Environment, Forestry, and Fisheries.

Staff at a Florida animal shelter cheer from empty cages — as all of the pups from one of its kennels were placed in homes amid the coronavirus outbreak. 🐶💛 https://t.co/AUjSrWgH0F pic.twitter.com/Uz6bpJ5X54

The South African government has also been backed by the opposition party, in their move to stop the spread of the virus. "Locking down our country and deploying the SANDF (South African National Defence Force) is something no South African would ever want to see in peacetime, but given the severity of our challenge, it is absolutely the right thing to do. The threat of this virus is akin to a wartime situation, and this requires of each of us to make sacrifices in our daily lives, and to some of the liberties of our democratic society," said opposition leader Steenhuisen in a statement, reported News 24.

Information about COVID-19 is swiftly changing, and Shared is committed to providing the most recent and verified updates in our articles and reportage. However, considering the frequency in developments, some of the information/data in this article may have changed since the time of publication. Therefore, we encourage you to also regularly check online resources from local public health departments, the Centers for Disease Control, and the World Health Organization.