Annie Wise and Riley Loudermilk who have been dating for 6 months admitted that the win was unexpected. 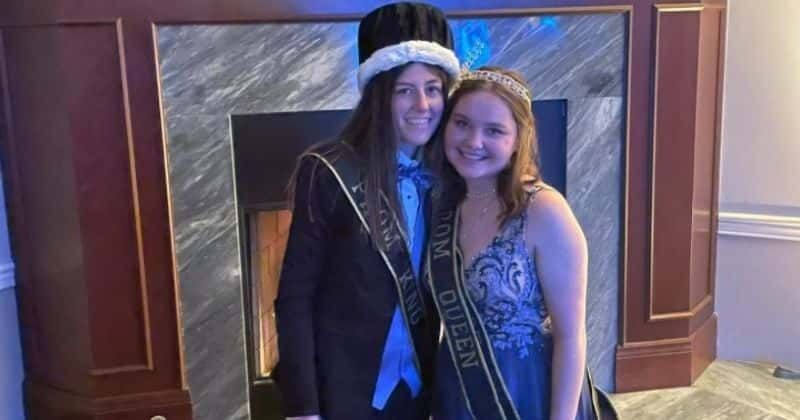 A lesbian couple as prom king and queen? Talk about breaking traditional stereotypes! Annie Wise and her girlfriend, Riley Loudermilk, were recently elected prom king and queen by their Ohio senior class. The two have known each other since the third grade and began dating around 6 months ago. They admitted that they never expected to be elected prom royalty at Kings High School in Kings Mills, Ohio. "Usually prom king and queen is like a popularity contest, and neither of us are really on that popularity spectrum," Loudermilk joked, according to NBC News.

But that doesn't mean that they didn't celebrate the win of being the first lesbian couple to be elected prom king and queen in the Kings Local School District.  It was still an unforgettable moment for both the 18-year-olds. Their friends reached out absolutely overjoyed and hugged them, once the announcement was made. There was  "a lot of screaming and jumping," Wise said. "My crown fell off and it broke. There was a lot going on, but it’s something I’ll never forget. It was amazing."

They are the first queer couple to be handed in the district. Their win was posted on the district's Facebook page to congratulate them. Many responded positively to their win with nearly 4.5k likes and over 2k comments. Some of them commended Wise for donning a suit to the prom as it wasn't allowed at their school. Wise said, "It took me forever to find this suit that I wore, because there’s like no tuxes for girls in all of Southwest Ohio," Wise said. "But the response that I got from it is amazing. I've gotten people from our school saying that they're more comfortable being gay at Kings. It made it all worth it."

❤️Time to NORMALIZE EQUALITY❤️ Social media users have rallied behind a lesbian high school couple that earlier this month became the first same-sex couple elected to prom king and queen in their school district in Ohio.#DemVoice1 #ONEV1 #wtpBLUE 🌊🌊🌊https://t.co/NPAKSHdU0N

However, not many were not happy with this decision. Unsurprisingly most of those who were not on board with this decision were adults. Loudermilk said she and Wise expected to receive some negative comments as a gay couple, but added, "It also just was kind of surprising that a bunch of adults were bashing teenagers."

An unidentified parent said. "Sorry, but I believe that there are still two genders, a male and a female,” according to local Fox affiliate WXIX-TV.  The parent added, "I think tradition stands for a queen that has a vagina, a king that has a penis and testicles."  Wise added that the focus on her gender and adults talking about her private parts was rather strange. “I just think it's weird that somebody who's old enough to be my mom is so worried about my genitalia and what's in my pants," she said. "I think that's more concerning than having a gay couple win prom, obviously." The school district has stood firm by the decision. School officials said the decision was made by the student body. "This is solely a Kings High School senior class nominated and voted-on initiative," said Dawn Goulding, a community relations coordinator for Kings Local School District.

I am absolutely astounded by this. This is the town next to me. This is an ultra conservative area. But here ya go.

Despite a few negative comments, the couple is focussing on the positive. The pushback from parents doesn’t represent the views of their classmates, the couple said. “Most parents are really conservative, but a lot of their kids aren't conservative at all — they're very liberal," Wise said. "And a lot of those conservative people's kids voted for us, and I just think that's really cool that kids are learning on their own and not just taking all their information from their parents." Loudermilk added, "I guess it's just crazy how much our generation is evolving and becoming more supportive of LGBT rights."

Wow living in Ohio I'm surprised it happened in our conservative state. It's very nice to see this story:)

The teens are hoping that their story might be helpful for other young LGBTQ people who might still be undecided about coming out or not. "I do hope it kind of just helps people realize that it's OK to come out, and it's also OK to come out at your own pace in your own way," Loudermilk said. "You will get hate from it, but there's also a really big chance that you're going to get so much love and support, like we did."