The NBA star backed Joe Biden and urged his followers to vote sensibly, before adding that "we need change." 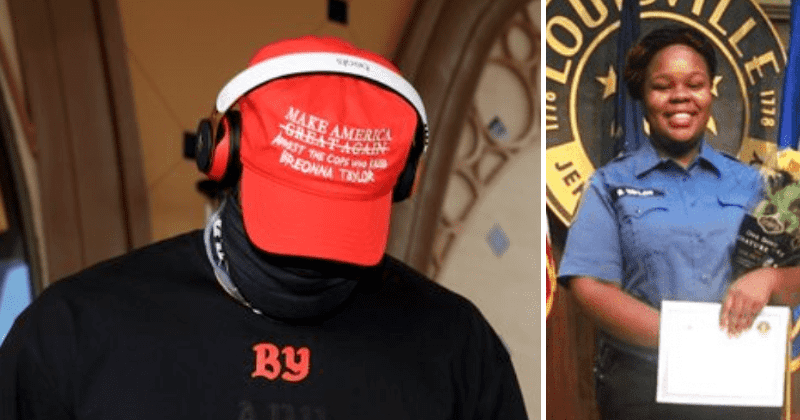 Star NBA player LeBron James and his Los Angeles Lakers teammates wore edited MAGA hats to show their support for the campaign demanding justice for Breonna Taylor. The choice to edit a MAGA hat seemed a dig at President Trump who has vociferously opposed the Black Lives Matter movement and labeled protesters as thugs and terrorists. The hat crossed out "great again" from the original MAGA hat which finally read: "Make America Arrest the Cops who Killed Breonna Taylor." LeBron James and his teammates showed their support ahead of their first playoff appearance against the Portland Trail Blazers, reported The Huffington Post.

“There has been no justice not only for her, but for her family.”@KingJames on his Game 1 attire for Breonna Taylor. pic.twitter.com/Togu3jQQRH

Breonna Taylor, a black female emergency room technician, was killed in the dead of the night by cops who fired 8 bullets into her while looking for a suspect, who was already in police custody at the time. As we reported, the 26-year-old was killed while cops were executing a drug warrant on March 13. Taylor's family accused the cops of arriving at 1 a.m. in plain clothes and unmarked vehicles before raiding her home, which led to Taylor being killed. Police had used a no-knock warrant, startling Taylor and her boyfriend before killing her. Detective Brett Hankison, Sergeant Jonathan Mattingly, and Detective Myles Cosgrove were involved in Taylor's death but are yet to be arrested. Hankison was fired, while Mattingly and Cosgrove were placed on administrative leave.

LeBron James explained why the team wore the hat. "You know the situation that’s going on in Louisville, Kentucky. An innocent woman being killed by the name of Breonna Taylor. A woman had a bright future, and her life was taken away from her. There have been no arrests. There’s been no justice, not only for her but for her family. And we want to continue to shed light on that situation, which was unjust. That’s what it’s about," said James at a press conference.

For George Floyd.
For Breonna Taylor.
For our children.
For ​all​ of us.

And for the lives of too many others to name, we’ve gotta do the work to fulfill that promise of ​equal justice under law. Because ​none​ of us are free until ​all​ of us are free. #DemConvention

The NBA star is all set to officially join the Biden team and support the former Vice President's campaign. Trump will be challenged by Joe Biden and LeBron James said it was time for a change. "We are at a time where we need change," said LeBron, reported TMZ. "In order for change, it's all about leadership — and leadership starts at the top." He worked actively to help the Hillary Clinton campaign in 2016 Presidential campaign.

This isn't new for the WNBA:

Last month, WNBA players protested the inaction of the authorities by walking off court prior to the national anthem. As we reported, the players wore T-shirts showing the message "Black Lives Matter" on one side and "Say Her Name" on the other, to acknowledge Black women victims who don't get the same media coverage as male victims. Layshia Clarendon, a point guard for the New York Liberty, said they "committed to saying the names and fighting for justice for the 'Black woman' ― Black women who are so often forgotten in this fight for justice, who do not have people marching in the streets for them."

Megan Rapinoe was also present at the WNBA game and wore a white t-shirt reading: Say Her Name. Megan Rapinoe was one of the first sportspersons to back Colin Kaepernick, by taking a knee in 2016. Kaepernick had taken a knee to highlight police brutality against the Black community. "I think it's actually pretty disgusting the way he was treated and the way that a lot of the media has covered it and made it about something that it absolutely isn't," said Rapinoe on her gesture.

Earlier this week, a billboard of Breonna Taylor in her hometown of Louisville, Kentucky, was vandalized with red paint being dabbed on her forehead to make it look like a gunshot wound. The incident highlighted the deep-rooted racism in America. The billboards were erected around Kentucky by Oprah Winfrey earlier this month. The image on the billboard is the same one featured on the September cover of Winfrey's magazine. It was the first time that someone else other than Oprah Winfrey was featured on the cover.

#BreonnaTaylor was murdered by Louisville, KY police while she was sleeping in her home. They drug busted the (wrong) home. Breonna & her boyfriend thought they were being burglarized & were met with over 20 rounds. She was shot 8 times. We can’t even sleep. Say her name. pic.twitter.com/Llwd7phnO1