The late veteran actor met the famous primate back in 2004, and the two of them formed a close bond in the few hours they spent with each other. 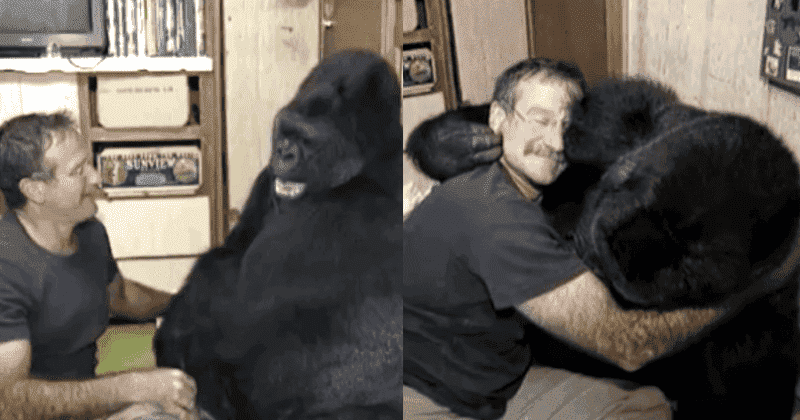 It doesn't take much for someone like Robin Williams to put a smile on our face. The late actor used to crack us up with his amusing antics and his humorous dialogues in most of his movies. He was a great entertainer and there's no doubt about it, but what is often understated was that he was an amazing human being who was known for his humble and down-to-earth nature. On one occasion, he ended up meeting Koko, the gorilla, who could converse and explain what she was feeling through sign language.

Koko was very popular after people began to find out that she could communicate with people using American Sign Language. Still, she was going through a tough time in her life and Williams was invited to meet her in 2001, Today reports. The amazing interaction was captured on video and posted on the channel called kokoflix that shows Williams and the gorilla hitting it off like old buddies.

The video opens with the actor narrating the interaction he's had with the animal. "I recently had a mind-altering experience communicating with a gorilla. Her name is Koko." When the meeting was arranged Koko was in a rough state after having lost her childhood playmate, Michael the gorilla, who had passed away six months prior. According to her caretaker Francine Patterson, she reportedly hadn't been feeling particularly well, until the meeting with Williams.

We then see Williams casually sitting on a chair, waiting for Koko to arrive. As the gorilla enters the room, we see her sit comfortably next to him on the floor and immediately grab his hand. Williams then reciprocates her affection by getting out of his chair and sitting next to her on the floor. In the adorable moments that followed, we see Koko asking Robin to tickle her on the tummy and thighs as she does the same to him too. Patterson, who was also the person who taught her sign language, said that Koko hadn't smiled a whole lot in a while until she met Williams. "Notice that Robin made Koko smile — something she hadn’t done for over six months, ever since her childhood gorilla companion, Michael, passed away at the age of 27," Patterson told Today.

Sending hugs for anytime who needs one today. pic.twitter.com/U3EIq8LsHY

It was truly a heartwarming sight as the two of them seemed really comfortable with each other. We see Koko even grabbing Williams' glasses to awkwardly try them out. The big ape then goes to a nearby window to test just what the glasses really do. The fun didn't end there as Koko later playfully picks through the actor's pockets and checks his wallet before asking for a drink. “Robin’s ability to just ‘hang out’ with Koko, a gorilla, and in minutes become one of her closest friends, was extraordinary and unforgettable,” Patterson wrote. “But not only did Robin cheer up Koko, but the effect also was mutual, and Robin seemed transformed.”

In another instance during the video, Patterson picks out a specific VHS tape which turns out to be one of Williams' movies. Koko appears to scan the wallpaper briefly before recognizing that it was indeed the actor's picture on it. This amazing interaction between humans and primates is just another fine example of the relationship we share with them. In the video, Williams said:  "We shared something extraordinary - laughter. Koko understands spoken English and uses over 1,000 signs to share her feelings and thoughts about daily events, life, love, even death."

According to Patterson, Koko could understand over 2,000 words of spoken English and her intelligence was on par with a three-year-old human child. When she was informed of Williams' death in 2014, she reportedly made the "cry" sign to indicate her sadness. "Through mastery of sign language—the familiar hand speech of the deaf—Koko has made us, her human companions, aware not only that her breed is bright, but also that it shares sensitivities commonly held to be the prerogative of people," Patterson said. Koko died on June 19, 2018, in Woodside, California after 47 years.