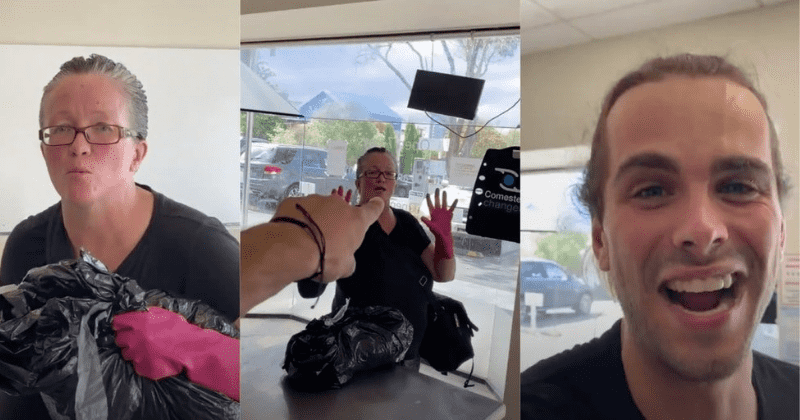 Karens have become a worldwide phenomenon since achieving social media infamy across the globe. In a viral TikTok video, a "Kiwi Karen" was rightfully put in her place for her racist behavior by a TikToker, who goes by the handle, thebuzzykiwi.  He posted the same video on his Instagram account with a lengthy caption detailing what took place. He confronted "Kiwi Karen" for hurling racist abuses at an Asian woman who was going about her business at a laundromat in New Zealand. In the video, he stated,  "Today I was doing my laundry and this woman began shouting racist slurs at an innocent Asian woman."  Despite other people being around, no one said or did anything about it. Therefore, he took it upon himself to do something about it instead of looking the other way. He added, "As the Asian woman ignored her, the intensity and aggressiveness of the racist slurs increased so I had to step in."

According to DailyDot, the woman can be heard saying: "She's a criminal. Stop harassing me, weird guy, drunk addict." The man quickly interjects and says: "Actually, you're the one being racist to this poor woman for no reason." Undeterred, Kiwi Karen replies: "No, no, she's a criminal," with seemingly no evidence whatsoever to back her false claims. "I don't have to participate in her crime and criminal activity." When he questions her as to what crime the Asian woman had committed, she naturally had none to offer, and in typical Karen fashion, asks him to mind his business as dealing with facts isn't something she's familiar with.

"We're in the laundromat; my (clothes) are in the dryer right now," the man says. Petulant Karen continues: "I don't wanna know---go away," she says plugging her ears. Moments later, the woman can be heard using a local slur and says "Get AIDS and die." The man, amused by this exchange, bursts out laughing before turning the camera on himself and says: "Oh my God, this is the problem with this country---this," while pointing to Kiwi Karen. "So this is the poor, lovely woman that [Kiwi Karen] was being racist to, for no reason," he continues, directing his fingers at the racist woman. "That's not right," responds Karen, as the video cuts off.

He also added that while New Zealand is one of the most liberal and accepting nations in the world, it's not always positive all the time, and offered this instance as an example. "New Zealand is not what the world thinks we are," he wrote. "Yes, there are incredible humans in this country. Some of the best in the world, but too often do we get caught in our own privileged confirmation bias bubble." When people commented from all over that they face Karens like her on a regular basis, the shocked Kiwi man added: "The amount of messages I have already received from people of different nationalities here in NZ who have told me this is a common occurrence for them, it honestly hurt my heart to read. I was truly overwhelmed."

In a similar instance that took place earlier this year in Australia, a woman proceeded to cough on two men when most of the country was on lockdown because she was told not to sit at a particular table and move to one further back. According to 9NOW, Andy Jones and his husband Colin were enjoying a drink at a Sydney bar when they noticed a woman move a sign to sit at a table a couple of yards away infringing on the rule to keep a safe distance away from other customers. Jones pointed it out to her and received a Karen response. "Basically we were told to mind our own business when we said that you can't do that. Management came over and asked them either to move or to leave, and she tipped the drink all over the table and walked up to my husband and coughed in his face."

The entire incident was captured on video by Jones who uploaded it on Twitter. The six-second clip has since gone viral, amassing more than 3.4 million views along with thousands of comments from concerned citizens. Jones and his husband are now forced to self-isolate themselves so that they avoid the risk of infecting others as they weren't sure if the lady was positive. "It's terrible, really," he said. "We don't know if that lady has got the virus or not. So, we've got to watch my husband now very carefully."