The King of Pop sported the custom velvet jacket while out with Elizabeth Taylor once and the premiere of his 'Ghosts' film. 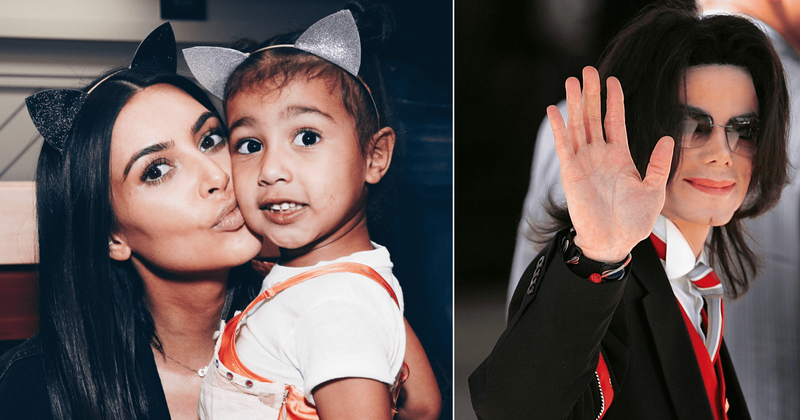 North West must've been a very good girl this year as Santa seems to have gone all out for the little fashionista's Christmas gift. Kim Kardashian and Kanye West's six-year-old daughter received an incredibly extravagant gift for Christmas this year with her parents shelling out the big bucks to buy her a jacket that belonged to the King of Pop. Little North— who is said to be a huge fan of the Thriller singer — might soon be seen sporting the exact velvet jacket Michael Jackson wore while out with Elizabeth Taylor once. The jacket was sold for $65,625 at an auction in October.

The 39-year-old Kim showed off the exorbitant gift on her Instagram Story on Christmas Eve, revealing that she and Kanye won the jacket in an auction as "North is a really big Michael Jackson fan." According to a report by CNN, the custom jacket was worn by the late pop-star for Elizabeth Taylor's 65th birthday party in 1997 and the premiere of his Ghosts film. It was sold for auction at the same time as Kurt Cobain's iconic vintage, olive-green cardigan, which sold for a record-breaking $334,000.

Kim and Kanye may have overpaid quite a bit for Jackson's jacket though as it was originally estimated to sell for anywhere between $10,000 - $20,000. However, the hefty price tag may have been worth it for the couple as the mother-of-four revealed that her oldest child was quite happy with her gift. "We won this on an auction for Northie for Christmas and we had it tacked up so she could wear it. The sleeves are half tacked up so when she gets older we can untack the sleeve and it can grow with her and she can have this for her whole life," she said.

"She's so grateful and so excited," Kim added. The internet, on the other hand, wasn't too happy about North's over-the-top Christmas gift, with many criticizing the celebrity couple for overindulging the 6-year-old. "I don't care how much Kim Kardashian loves Michael Jackson, she bought his jacket for her f*****g child to wear it. They don't know the real value of these memorabilia. Lady Gaga did the same thing, I hate it. They belong to museums and should be framed and preserved like relics," @Deppsonx tweeted.

the fact that kim kardashian got her young ass daughter a real michael jackson jacket.... like does she even realize the importance? or is she just gonna drop food all over it i can’t

so kim kardashian gifted north michael jackson’s ACTUAL jacket, had it altered and everything. something about that doesn’t sit right with me.

Kim Kardashian literally got north Michael Jackson’s actual jacket for Christmas.. oh my god those children really do have it all don’t they? Must be nice being born into a rich family init x

Kim kardashian bought her daughter, North, who is 6 years old Michael Jackson’s infamous jacket and then HEMMED IT SO SHE COULD WEAR IT. WTF!! I’m annoyed by this pic.twitter.com/k5dSvBgrj3

Meanwhile, given the current divided public perception of Jackson following the release of the controversial HBO documentary Leaving Neverland, some netizens also wondered whether this was Kim's way of making a statement about where she stood on the subject. "Kim Kardashian and Kanye buying Michael Jackson's jacket and giving to their daughter might look innocent but is a statement on the same level as Dave Chappelle earlier this year. A refusal to bow down to that groupthink," tweeted @sammesterton.

I am not a big fan of Kim or Kanye but I love this line from the article,

'North is a really big Michael Jackson fan and we knew she would love this.'

It’s been almost a year when LN came out and MJ is still going strong#MJFam #mutewho https://t.co/dNDp0QQh3X

Y'all lucky Kim Kardashian even gives a fuck about Michael Jackson after this year. Y'all dont understand a blessing when you see one.

Kim showing off that jacket WITH A PICTURE OF MJ IN IT is the opposite of staying quiet about him. That, in and of itself, is a statement.

Help me understand why tf this girl @KimKardashian would buy her daughter a #MichaelJackson original jacket for Christmas. After everything we’ve heard, we’ve seen - really?!?! This is what you buy your daughter?!?! #KUWTK #LeavingNeverland pic.twitter.com/bhNdbNcTxk

North's Christmas gift added fuel to online criticism about Kim and Kanye's parenting after the 6-year-old was recently spotted rocking $10,000 Birkin bag. According to Daily Mail, a bag from the Hermes range retails between $5,000 to $500,000. "Absolutely ridiculous and unnecessary. It's a shame the wealthy don't instill values in their kids and teach them humility instead of literally giving them whatever they want. A kid doesn't know the diff between a Louis V and a Wal-Mart bag. It's the parents who are braggards," tweeted @Alessi75126374.

i cannot stand the way the kardashians spoil their kids lmfaooooo there’s no reason for north to have a birkin orrrrr for stormi to think her surprise was gonna be one. they got me fucked up