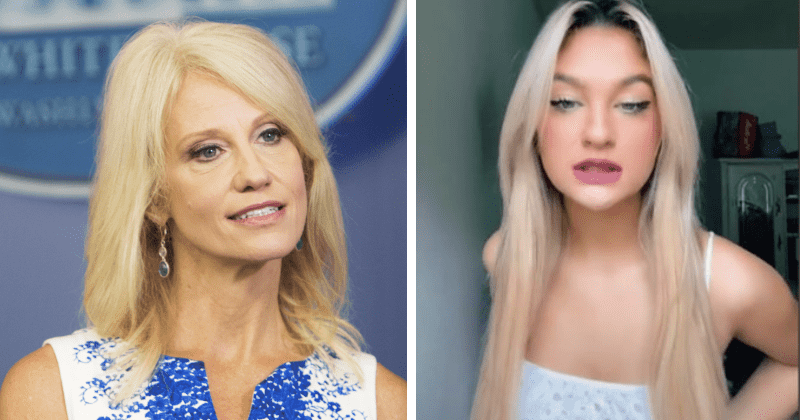 Donald Trump's trusted former counselor Kellyanne Conway allegedly posted a topless photo of her 16-year-old daughter, Claudia, on Twitter, according to reports. The cops are investigating the case after the photo was allegedly posted as a fleet, the Instagram story-version on Twitter, before being deleted immediately, reported The Sun. Claudia Conway learned of the alleged photo being posted as a fleet from one of her followers on TikTok on January 25. One of them commented about the photo leak on her TikTok video. “Are you not going to address your mom posting naked pictures of you?" read the comment. Claudia, who didn't have a clue what they were referring to, replied, "What." This was followed by another user explaining, "Yes, her mom posted her Twitter story today a picture of Claudia without a shirt on." The Conway family has been in the spotlight for over a year with their daughter Claudia, sharing information on their troubles at home. It made matters worse that George Conway, Claudia's father constantly denounced Donald Trump while Kellyanne Conway was a staunch supporter of the former President. Kellyanne Conway had quit her post as Senior Counselor to the President in the previous administration to address her family issues late into Trump's stint at the White House.

Claudia Conway posted a video discussing the photo leak and appeared to confirm the authenticity of the nude photo. Claudia claimed that her mother often confiscated her phone and has the habit of taking photos of its content. Claudia claimed the topless photo of hers, taken months ago, was stored on her mother's phone. "I guess she accidentally posted it or someone hacked her. Nobody would ever have any photo like that, ever. So Kellyanne, you're going to f*cking jail," said Claudia in a video that was shared to her 1.6 million Tik Tok followers. The video was later deleted from her account. #JusticeForClaudiaConway was trending on Twitter not long after the 16-year-old addressed the photo leak. Claudia also reportedly made posts in morse code, seeking help.

kellyanne conway literally leaked her underage daughter’s nudes and now she’s on tiktok saying she’s scared and begging for help in MORSE CODE how is this real life someone help claudia conway pic.twitter.com/2a7RriaABQ

Police officers reportedly contacted the family's home in Alpine after getting calls from strangers with regards to the photo. Claudia managed to share the authorities' visit via Facetime to Claudia's friend Tana Mongeau, who broadcast it via Instagram Live. An officer can be heard allegedly interacting with Claudia and Kellyanne on Instagram Live. A woman believed to be Kellyanne Conway can be heard saying "just take her away, she's an addict." Alpine Police Chief Christopher Belcolle confirmed that they were investigating the incident, reported New York Post. “An investigation is being conducted. No additional information can be released,” said Belcolle, adding that records of juveniles are not made public.

The following morning, Claudia posted a couple of videos urging people to not call the authorities over the alleged photo leak. "It only hurts us, more than it helps us. Making threats and what not is really putting my safety at risk and putting me in danger," said Claudia before adding that the family wanted to deal with their issues privately. "I will never ever be speaking about this publicly," added Claudia.

here is a video of the conversations they had because of the photo. #KellyannConway is a disgusting human. #justiceforclaudia pic.twitter.com/hMt3D3mEdr

"I was distraught, and very very upset, and I acted irrationally and impulsively, and it’s something that I do regret," said the teenager in a video. Claudia also said she was going to take a break from social media, to work on their relationship offline. The 16-year-old said that she doesn't believe her mother intentionally posted the topless photo of her intentionally. "I know my mom would never ever post anything to hurt me like that intentionally, and I do believe she was hacked. We fight like mothers and daughters, but we also love like mothers and daughters,” said Claudia. "I will be taking a break from social media because we are very tired of being headlines.” George Conway, her father, also shared one of the videos, writing, "Our daughter Claudia asked me to tweet this statement for her."