Author's attorney argued that the book was a great public concern and was about a sitting president in an election year. 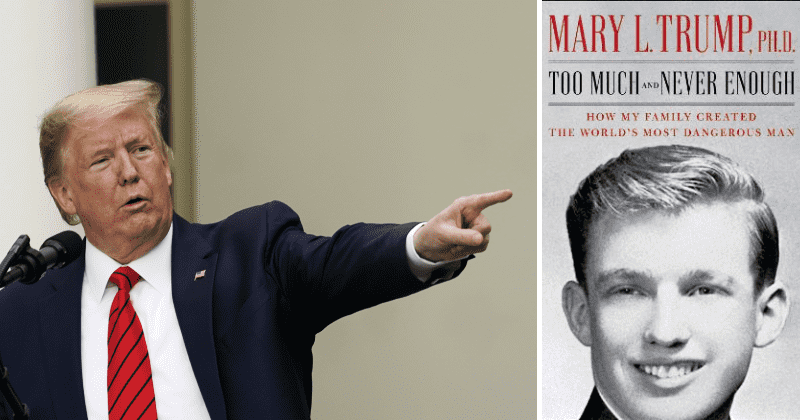 A New York judge has provided temporary relief to Donald Trump after he blocked the publication of his niece, Mary Trump's book. The President's niece describes the sitting President as the “world’s most dangerous man” and had also promised to reveal salacious details about Trump's life including details about the toxic Trump family dynamic. Judge Hal B. Greenwald ordered that no copies of the book should be distributed until a hearing is held next month on the basis of a request for an injunction by Trump’s brother Robert Trump. Donald Trump's brother argued that Mary Trump is not allowed to publish any details as she had signed a settlement agreement over Fred Trump's will in 1999, reported CNN.

Robert Trump's attorney argued that Mary Trump wasn't allowed to publish any details about the family because of the settlement agreed in the inheritance case. As part of the settlement agreement, family members could not publish any accounts of the litigation that had ensued or their relationships with each other in any form unless they got consent from the Trump siblings — Donald Trump, Robert Trump, and Maryanne Trump Barry. Robert Trump's attorney, Charles J. Harder, claimed that the book — Too Much and Never Enough: How My Family Created the World's Most Dangerous Man — violated the agreement. He also claimed that his client would seek “maximum remedies available” for the “truly reprehensible” actions of Mary Trump and publisher Simon & Schuster. He claimed that it caused “enormous damages” to his client.

The original publishing date was set for July 28 but the now the book has been put on hold until the next hearing. "Robert Trump is very pleased with the New York Supreme Court's injunction against Mary Trump and Simon & Schuster," said Charles Harder, Robert Trump's attorney in a statement." Short of corrective action to immediately cease their egregious conduct, we will pursue this case to the very end," said the attorney. Charles Harder is known to frivolous lawsuits on behalf of the President against news organizations. Most of such cases are often dismissed as nothing but PR.

Trump viewed his brother Robert with utter disdain and drove him out of their company. Robert moved to a farm, never to be heard from again. Laughable that he's referring to his "wonderful" brother in an attempt to squash a book by their niece, which exposes family dysfunction

Ted Boutrous, a First Amendment attorney representing Mary Trump claimed the judge's order "flatly violates the First Amendment." He also stressed the importance of the book and its timing. "We will immediately appeal," said Boutrous, reported The New York Times. "This book, which addresses matters of great public concern and importance about a sitting president in an election year, should not be suppressed even for one day."

Simon & Schuster chief executive Jonathan Karp said they were unaware of any confidentiality agreement Mary Trump had agreed to until "about two weeks ago, well after the book had been accepted, put into production, and printing had begun." He claimed that stopping the publication would "impose extraordinary economic harm" to the company. He also revealed that more than 75,000 copies of the book had already been printed. He also added that the company "no longer maintains control of the copies" as copies had already been shipped to booksellers and online retailers. "In my over 30 years working in book publishing, I am not aware of a book that was ever enjoined and censured from the public for any reason," said Karp. The book was already the fourth bestselling book on Amazon earlier this week. The publisher claimed that the book would shine "a bright light on the dark history of their family in order to explain how her uncle became the man who now threatens the world's health, economic security, and social fabric."

Recently, the Trump administration unsuccessfully tried to took legal action to block the tell-all book of John Bolton, the former national security advisor. The judge argued that Bolton's new book had already been widely distributed and that the court would "not order a nationwide seizure and destruction of a political memoir."