Jon Bon Jovi Goes On Romantic Vacay With Wife Dorothea Hurley, Look Much In Love Even After 30 Yrs Of Marriage

Jon Bon Jovi and wife Dorothea Hurley were spotted strolling through St. Barts while on a Carribean vacation. They were joined by son Jesse James for the family holiday. 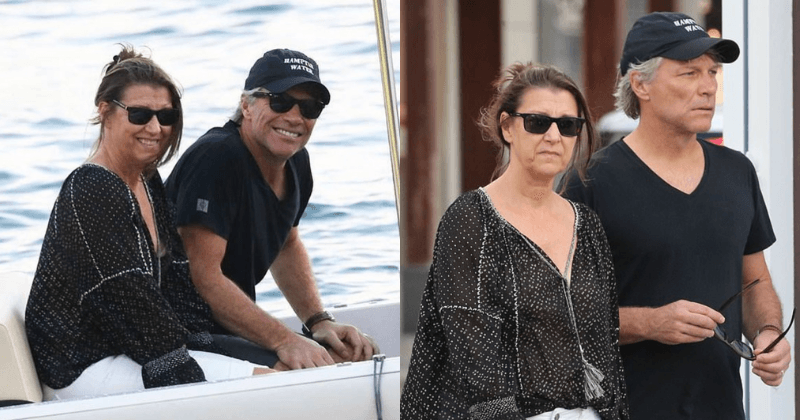 Music legend and one of the world's best-selling artists Jon Bon Jovi was recently spotted spending some quality time with wife Dorothea Hurley. The beautiful and graceful couple who have been married for nearly 30 years looked much in love as they were spotted enjoying a lovely Carribean vacation. The pair, that has been together since high school, was seen strolling through St. Barts. They were joined by their son Jesse James for the family holiday. The global star opted for a casual look for his day out in the Carribean. He wore a simple black V-neck T-shirt and gray shorts, while he covered his salt and pepper hair in a black cap which had the words 'Hampton Water'. Meanwhile, his wife paired a black blouse with white denim shorts for the outing, reports Daily Mail.

At a time when marriages are falling apart, the singer's relationship lasting nearly 30 years, is one of the most both endearing and enduring ­marriages in showbusiness. In an exclusive interview to Mirror in October this year, he spoke about their relationship and more and said he is more in love now than when they said "I do" at Graceland Wedding Chapel, Las Vegas. "I feel 10 times better today than when we did it back then. Looking back on it, the marriage was the greatest deal I ever made," added the founder and frontman of the iconic rock band Bon Jovi, which was formed in 1983.

But the marriage got off to a rocky start when Dorothea drew public ire when she and Jon, then aged 27 and was at the helm of the world's biggest band, eloped. Reports of mass hysteria among his female fans made headlines across the world. "It was like Harry Styles or Justin Timberlake getting married. I was that to the young girls in my time. When I came back from Vegas my manager was furious. He was like, ‘America's boy is now married… that's not a good career move'. The record company was also despondent," said Jon.

But fans weren't the only ones who were left unhappy and miffed. "It didn't fare well with my mother, either. F*** no. She was not impressed," said Jon. But it seems to have ended well, and how. Jon, 56, dad-of-four now laughs about all the drama that unfolded then. Even his band was in trouble. "Jon says the band is lucky to be still going at all given the fallout after he got hitched during a one-day break on 1989's New Jersey tour," says Mirror. Jon reminisces, "America wasn't happy on that Monday when they found out about the wedding and a lot of people tried to ruin a beautiful thing. They tried to cheat us out of that moment."

The couple has four children, daughter Stephanie Rose, 25, and three sons, Jesse James Louis, 23, Jacob Hurley, 16, and Romeo Jon, 14. Jon adds that life without his wife would've been very difficult for she weathered many a storm with him. "She is the rock of my family, my career, my being. I am grateful for someone in my life like that who I can love and trust," he added. She was apparently the one who helped him keep it together during one of the toughest times of Jon's career when his band was burnt out in the wake of the Slippery When Wet tour. Jon reportedly had a hard time when he struggled with depression, so much so that he had briefly thought about ending it all and driving his car off the road.

Meanwhile, the iconic band is preparing to embark on another massive world tour, that will include UK dates next June. The '90s legends will perform at iconic venues like London's Wembley Stadium and Liverpool's Anfield. Bon Jovi will bring the roof down as they set the stage on fire at Anfield Stadium on June 19, Wembley Stadium in London on June 21 and Coventry's Ricoh Arena on June 23. Special guests Manic Street Preachers will be joining them on the tour. They will also hit Japan and Australia later in 2019.

Jon returns to the UK for the first time in six years and he says he is raring to go. Remembering his last visit to Liverpool for the 2007 Royal Variety Show, he said, "Between the soundcheck and show, there was nothing to do… so we started driving around in our smart jackets and ties to try and find John Lennon's childhood home. To our surprise, we found it and went and knocked on the door. It was all being refurbished and wasn't open. But amazingly they let us in and we all got pictures of us in his childhood bedroom. It was a very special memory."

Interestingly, the performance at Anfield holds special significance considering it's one of the first concerts at the iconic stadium in a decade. Sir Paul McCartney, a good friend of Jon, was one of the last to play more than a decade ago. Recalling his meeting with Sir Paul a month ago, he said, "Two old men sitting in a rocking chair. I have always loved the Beatles – my mum had the records and I have been blessed over the years to have become friendly with Paul. I am fortunate to see him every summer. I only address him as Beatle Paul. I don't address him as Paul."