The singer aims to help "one soul at a time" and through his nonprofit Jon Bon Jovi Soul Foundation, has addressed issues of food insecurity and homelessness. 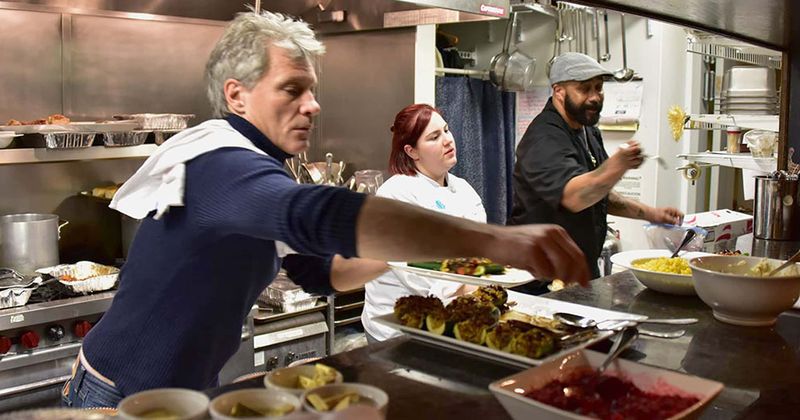 Although Jon Bon Jovi made a name for himself through his music career, the 57-year-old singer-songwriter wears many hats. Apart from his interest in the arts, he is an avid philanthropist who truly believes in giving back to the community in whichever way he can. While most celebrities of his stature limit their charitable work to photo ops and high-profile promotions, the 'It's My Life' singer goes above and beyond to help those in need. Along with his wife Dorothea Hurley, the singer has opened 2 community restaurants in the hopes of tackling issues of food insecurity while allowing those with limited resources to enjoy a free meal with no judgment.

The couple first opened the JBJ Soul Kitchen in Red Bank, New Jersey, in 2011 with the aim of feeding and empowering those in need. The establishment has no prices on its menu and instead diners can make a suggested donation of $20. Even those who are unable to make the donation are welcomed with open arms to enjoy a delicious farm-to-table meal. The community restaurant also offers customers a "Pay It Forward Program where each additional $20 donation provides meals for those who are unable to donate."

According to a report by Billboard, five years later in 2016, Jon Bon Jovi and Dorothea opened a second Soul Kitchen in Toms River in New Jersey. Speaking to guests at a press conference, the singer said, "This location being even larger, we are going to have an even greater impact on the community of Toms River. Our mission has always been to affect positive change and address the issues of hunger and homelessness. We are expanding our mission with a network of partners and resources to meet the needs of the community of Toms River."

As per the foundation's website, the JBJ Soul Kitchens have served a total of 105,893 meal to date, of which only 54% were paid for with donations. However, the singer ensures that those who walk through the restaurant's doors are served food of the utmost quality. "JBJ Soul Kitchen serves a 3-course meal based on American Regional cuisine, beginning with the option of a soup or salad. Each guest also has the choice of an entrée such as a fish, meat, or vegetarian selection. The meal is finished with a freshly made dessert. Our chefs prepare many of the dishes with natural, locally sourced ingredients from our garden or the JBJ Soul Kitchen Farm," reveals the website.

The JBJ Soul Kitchen is only one facet of the Jon Bon Jovi Soul Foundation's provide aid to families in economic despair. Speaking to CNN about the foundation's mission, he said that his strategy is to help "one soul at a time." He added, "I thought 'how can we bring people together in an affordable, accessible way?'" His attention was drawn to the homeless on a harsh Northeast winter night when saw a man sleeping on a grate in the dead of winter. "Right there it all crystallized for me. It didn't matter if you were young, old, black or white, Republican or Democrat... this was an issue that could affect anyone," he said.

Determined to make a difference, he has helped provide more than 500 affordable homes to those in need across 10 states through his foundation. "Most Americans live two paychecks away from problems, and I thought this is something we can do. And most importantly I didn't need the scientists to find the cure," he explained. Speaking about what's next for his community restaurants, he said, "Now the question is 'do we want to open two or three or 10... or do we go really big?' Well, we will definitely see growth. The question is incremental. The key to our success is empowering the individual," he said.