Kelly Preston lost her life to cancer on Sunday, July 12. 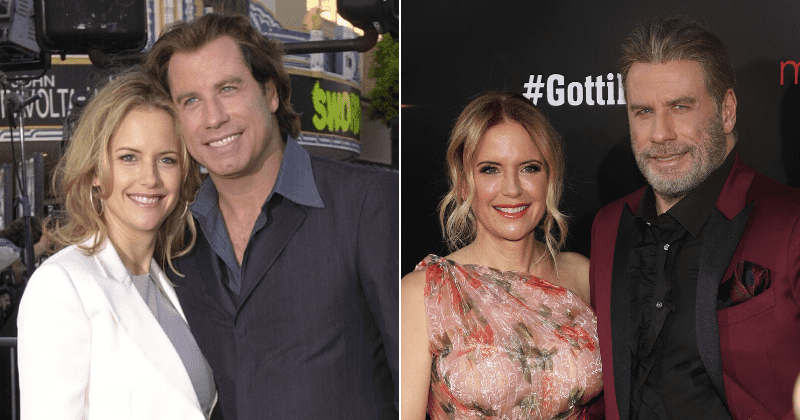 Kelly Preston tragically passed away after a two-year battle with breast cancer on Sunday. Despite the heartbreaking loss, Travolta remembers his wife of over 28 years as someone who "fought a courageous fight with the love and support of so many." A family rep said, "She was a bright, beautiful, and loving soul who cared deeply about others and who brought life to everything she touched." The pair first met in 1989 at a screen test for their 1989 comedy, The Experts. At the time, Preston was married to her SpaceCamp costar Gage in 1985 but she knew was with the "wrong person". The marriage ended after two years, reports PEOPLE. When asked by Andy Cohen on Watch What Happens Live if it was love at first sight when she met Travolta, Preston said, "Kinda." "Well, I was not that happily married, let’s put it that way," she continued. "I was really with the wrong person." Once she was single again, the two began dating.

Who would've ever thought that during "The Experts" in 1989, John Travolta & Kelly Preston would become soulmates? pic.twitter.com/FtNnZcBz

Travolta got down on one knee in 1991 on New Year's Eve inside the Palace Hotel restaurant in Gstaad, Switzerland. When it came to religion, Travolta had been a member of the Church of Scientology since 1975. A Scientology minister officiated their wedding on September 5, 1991. They first wed at the Hotel de Crillon in Paris, and later got married for a second time on US soil in Daytona Beach, Florida. Preston was two months pregnant with the couple's son Jett at the time of the wedding.

From their wedding day to the birth of their beautiful children #KellyPreston https://t.co/vj0ehbEd4k

The only daughter of Travolta and Preston was born on April 3, 2000. They named her Ella Bleu. She followed in the footsteps of her parents and became an actress. She starred in the 2019 film, The Poison Rose, alongside her famous father and Morgan Freeman. At the time, the proud mom shared how happy she was for her daughter, writing on Instagram: Still in absolute awe of my stunning daughter @ella.travolta I just re-watched all of her interviews this past week doing press for #thepoisonrose and she has jumped into ‘the family business’ as an absolute natural. I am beyond proud of her and all of her accomplishments, but most of all I am proud and honored to have her as my daughter.I love you and congratulations.

The couple may have had busy schedules but would always make time for each other especially on birthdays and anniversaries. Travolta once surprised Preston with a 40th birthday cake at the One World, One Child Benefit Concert in 2002. The family was also seen celebrating Travolta's 65th birthday on Feb. 18, 2019. The couple celebrated their 28th wedding anniversary on Sept. 5, 2019. In her 28th anniversary post last year, she honored the love she had for her husband, writing: To my dearest Johnny, the most wonderful man I know. You have given me hope when I have felt lost, loved me patiently and unconditionally… made me laugh harder than any other human being possible… shared the most beautiful highs and at times lows. You’re a dream Daddio and make life so much fun!! I trust my love with you implicitly… with you I know I will always be okay no matter what happens… I love you forever and completely. Happy 28th Anniversary @johntravolta

The couple has had their share of heartbreaks too. Their oldest son Jett died while on vacation in the Bahamas with the family. He was just 16 at the time. He suffered a seizure and hit his head in a bathtub. He was 16. That loss is still as tragic to actor John Travolta even today. “[John] never dreamed of this — their relationship was so close," said family attorney Mike Ossi. “He always said ‘I’m happy as long as my kids are happy.’ He is heartbroken. To bury your son is the worst thing you can ever do.” The family powered through. The star and his family set up the Jett Travolta Foundation in 2009 in honor of their Jett, who had autism, to help children from a variety of disadvantaged backgrounds. Preston once shared an emotional Instagram post to raise awareness about others with autism. She captioned a touching photograph of a smiling Jett with his parents: To my sweet love, Jett... you are in our hearts forever. I send love to all of the beautiful autistic children and the wonderful people who love them. May we all shine and grant love and respect to children with special needs💕 #autismawareness #autism.

Two years after Jett's death the couple welcomed another little boy Benjamin, who helped the family find love and joy again. “Certainly having little Ben has been a beautiful kind of glue for us to rebond after tremendous loss,” Travolta said in an interview with Good Morning America. “He’s given the house a renewed spirit and purpose,” the actor added to PEOPLE in 2011. We hope the family finds that spirit and sense of purpose and joy again.