trending celebrity people lifestyle news animals
Joe Biden Says, "I Would Insist That Everybody Out In Public Be Wearing A Mask" Amid Pandemic

Joe Biden Says, "I Would Insist That Everybody Out In Public Be Wearing A Mask" Amid Pandemic

Talking to journalist, the presumptive Democratic Presidential nominee said he would "do everything possible to make it required that people had to wear masks in public." 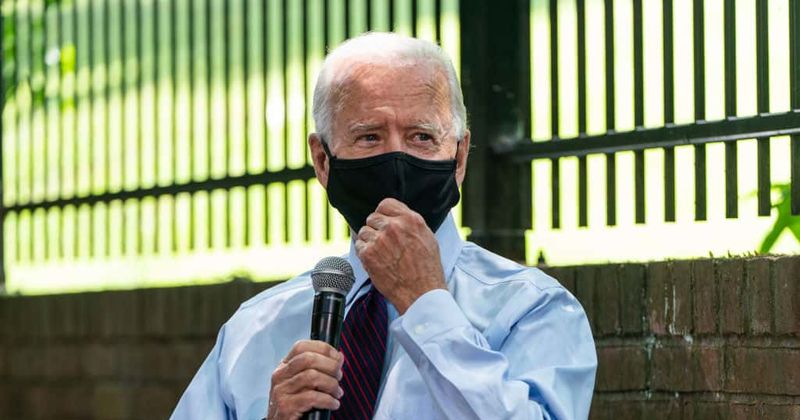 Wearing a mask has somehow become a controversial and hot button topic in the United States. Many have seen it as an infringement on their personal freedoms. However, it has been proved that masks have the ability to stop community spread effectively if worn correctly and paired with social distancing. In light of the recent anti-mask rallies and all the comments made by President Donald Trump regarding masks, journalists asked presumptive Democratic Presidential nominee Joe Biden his thoughts on wearing masks. He responded by saying that he would make masks a requirement for all those who wish to go out in public, CNN reports.

"The one thing we do know is these masks make a gigantic difference," he stated. "I would insist that everybody out in public be wearing that mask. Anyone to reopen would have to make sure that they walked into a business that had masks." When pushed to answer whether he would use his federal powers in order to mandate the use of masks, he replied in the affirmative. Biden said, "Yes, I would. From an executive standpoint, yes I would... I would do everything possible to make it required that people had to wear masks in public." This is only a controversial statement if you believe that your personal desires are more important than public health, especially at a time when thousands of Americans have been killed due to the pandemic.

Trump supporters think they should have the CHOICE to wear a mask bc it's their body & their life...... but be the same mother fuckers who are pro-life???????

As per the Centers for Disease Control and Prevention, masks are an important tool to prevent or at the very least slow the spread of the disease. The agency recommends that everyone wear a cloth face cover when they have to go out in public. At present, about 16 states and the District of Columbia have mandates on wearing cloth face masks in public. However, these mandates have been protested by those who believe they should have the personal freedom to not wear a mask if they do not wish to. Health experts have warned that not wearing a mask could result in deadly consequences.

Even two of the most sinister conservatives in modern history support wearing masks. This is NOT a partisan issue folks.

Trump just doesn’t want to smudge his face makeup. Don't listen to him. Wear a mask you maniacs.

Despite this, President Trump seems to care quite little about why masks are important. He has continued to defy the recommendations of health experts and refuses to be seen in public wearing a mask. Reportedly, everyone who comes in close proximity to the President is tested on the regular (nonetheless, this may not be enough). He called masks "a double-edged sword" and even insisted in a recent interview with The Wall Street Journal that masks have been utilized as a political statement, to display disapproval of him, rather than as a health precaution. He stated, "People come in, they're talking through the mask for hours. They probably don't clean them after, you know, they get a little cocky, right? Then they take the mask, they put their finger on the mask, and they take them off, and then they start touching their eyes and touching their nose and their mouth. And then they don't know how they caught it." Just last month, Trump mocked Biden for wearing a mask, to which the Democrat responded by calling him "an absolute fool."

Obama: I stopped smoking because I could never forgive myself if a young person, or anyone, thinks smoking is okay because the President does it.