The 39th president of the U.S. has installed solar panels in 10 acres of his farmland which now powers most of his hometown in Plains, Georgia since 2017. 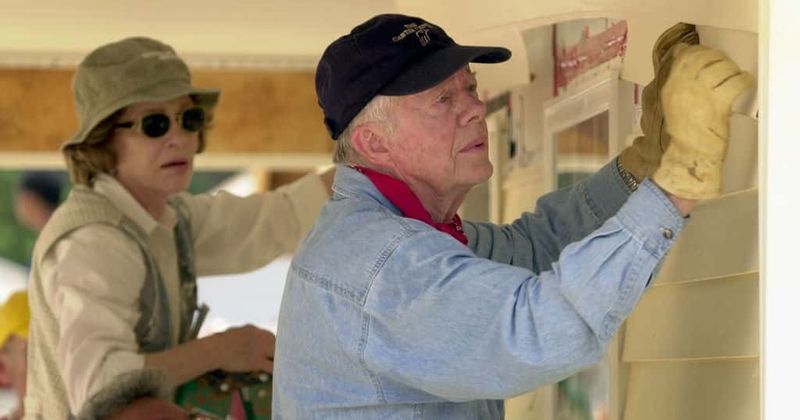 For decades, Jimmy Carter has inspired Americans to be a better version of themselves and continues to so even in his 90s. Be it spreading the virtue of hardwork or adopting modern ideas to keep the environment clean, the 97-year-old has always given it his all to help mankind. During his time in the White House, Carter championed new energy and even installed solar panels to power portions of the historic building. In doing so, he became the first President to do so. But it wasn't a tactic to attract votes or followers but an honest belief that it would ultimately benefit others and that's why his legagacy continues decades later near his home.

The 39th president of the U.S. has installed solar panels in 10 acres of his farmland which now powers most of his hometown in Plains, Georgia since 2017. What was once a nut and soybean farm, now has 3,852 solar panels that captures the Georgia sunlight and converts it into energy which makes up 50% of the power consumed by the small town. The solar panels can provide could provide 1.3 megawatts — or 1.3 million watts on a good day, Carter told Sierra Club right after the panel were installed in 2017. For a better understanding note this, one megawatt provides enough energy to power 400-900 homes, according to the U.S. government. However, it's important to remember that the watts harnessed by solar panels provide a little less than that.

Jimmy Carter was the first President to have solar panels installed on the WH (later removed by a Republican asshole in 1986). Today he owns a 10-acre 1.3 megawatt solar farm that powers half of Plains, Georgia. America needs more Jimmy Carter(s). pic.twitter.com/M5YuWxsD6j

Carter teamed with SolAmerica, who approached the former President, to install the panels on his farmland. According to the company, the soalr panels provide more than 50 percent of power to the 727 residents in the small town. Speaking to PEOPLE, SolAmerica Energy President George Mori revealed that the solanl panel farm is still operation "in its original size" and that it continues to provide more than half the power required in the Georgia town. The partnership agreement between SolAmerica and Georgia Power- the state’s largest electricity company- will last until 2042 and is expected to provide more than 55 million kilowatt hours of clean energy there.

#OTD in 1979 solar panels arrived at the White House for installation. President Carter unveiled the 32 panels to the public on June 20, 1979. Now, he leases 10 acres for a solar farm that supplies 50% of energy to his hometown of Plains, GA. Image, NAID 184386 pic.twitter.com/sdswPdsNCA

"Rosalynn and I are very pleased to be part of SolAmerica’s exciting solar project in Plains," said Carter back in 2017 annoucing the project. "Distributed, clean energy generation is critical to meeting growing energy needs around the world while fighting the effects of climate change. I am encouraged by the tremendous progress that solar and other clean energy solutions have made in recent years and expect those trends to continue." This came years after he first installed 32 panels on the roof of the White House in June 1979. At the time, he noted that it was just a matter of time before such teachnology would become a part of America's energy sources.

"In the year 2000 this solar water heater behind me, which is being dedicated today, will still be here supplying cheap, efficient energy," he said. Unfortunately, Carter's panels did not make it to the 21st century as President Ronald Reagon removed it after taking over the White House. However, President Obama made it a point to reinstate a 6.3-kilowatt solar array on the roof of the White House in 2014. Although Carter's solar panel did not last that long in the White House, a University of Oxford study revealed that the use of clean energy has increased significantly since the 1960s. "When I told people we were getting solar panels, they said, 'In Plains?'" recalled Jan Williams, who ran the Plains Historic Inn, during an interview with The New York Times in 2017 when the panels were being installed on the farmland. "They say, 'Well, that’s because of Jimmy Carter.' It is because of Jimmy Carter. Plains is all because of Jimmy Carter," added Williams.