For 36 years, Jimmy Carter and his wife Rosalynn Carter have led an annual build for Habitat, erecting and fixing up more than 4,000 homes. 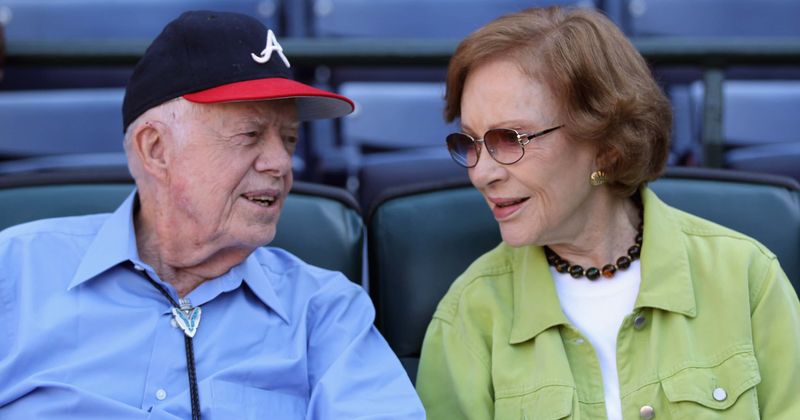 Former US president Jimmy Carter, 95, owes his long, fulfilling life to his faith and his wife who is 92 years old. In a recent interview with People, the former POTUS said,  “It’s hard to live until you’re 95 years old. I think the best explanation for that is to marry the best spouse: someone who will take care of you and engage and do things to challenge you and keep you alive and interested in life. One of the things Jesus taught was: If you have any talents, try to utilize them for the benefit of others,” says Carter, adding, “That’s what Rose and I have both tried to do.”

The couple has been together in marital bliss since1946 and they admit “having had a good life together". With similar interests like bird-watching, tennis and even downhill skiing (back in the day, of course), they spent decades enjoying their favorite hobbies together.

But now and again they do like to pause and take a break their public lives, which they confirm that neither will yet retire. “Now when we have a quiet moment, like a birthday or something, we like to stay at home, just by ourselves, and enjoy a quiet day in our own house without any visitors and with minimum phone calls and emails coming in,” he says.

For now, he's taking a break from helping build Habitat for Humanity houses in Nashville, Tennessee. He and his wife have led an annual build for Habitat, working on more than 4,000 homes for 36 years!

“We knew that we had undertaken a very enjoyable hobby on the side. We stayed busy doing other things” — work that even him the Nobel Peace Prize — “but we devoted 36 years to Habitat,” he said.

Just this year alone, the couple helped build 21 homes in the Nashville area. Carter is the oldest living president in American history having outlived his family members by decades.

When he was diagnosed with cancer in 2015, he wasn't expecting to beat the disease. “I just thought I had a few weeks left, but I was surprisingly at ease,” Carter said at the time.

“I’ve had a full life, I have thousands of friends … so I was surprisingly at ease, much more so than my wife was.” The former president beat the cancer and he and his wife were back to working with the Habitat.

“Sometimes, when we go into a community where we built houses maybe 35 years ago, or 25, 20 years ago, we try to visit those Habitat sites just to look at them and meet some of the longtime homeowners,” he says.

“They’re very proud of their house. We never find any houses that we have built with graffiti on the outside walls or with broken windows or un-mowed lawns. … They set an example for everybody that lives around [them].”

So what are the former president's future plans? Next year in 2020, the Carters are looking to go with the Habitat to the Dominican Republic.

“I think both mine and Rose’s minds are almost as good as they used to be, we just have limited capability on stamina and strength,” he says. “But we still try to stay busy and do a good job at what we do.”