In a new political cartoon, the actor alleged that the current state of gun deaths was far worse than 9/11. 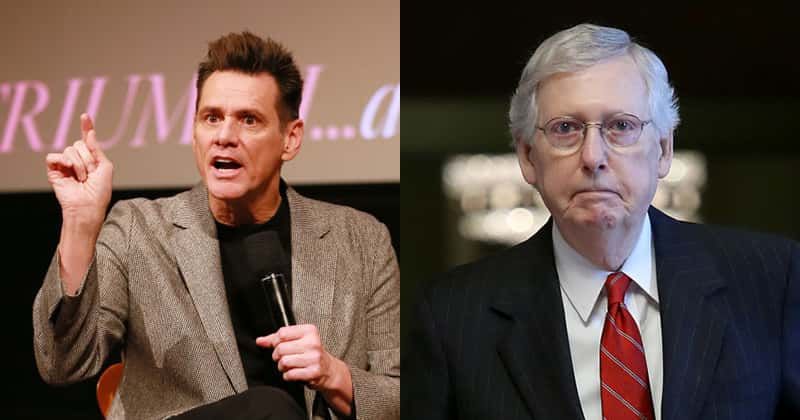 Here's a lesser-known fact about actor and comedian Jim Carrey, he of the amazing rubber face: he's also a spot-on political cartoonist. In a tweet on Wednesday, Carrey insinuated that Senate Majority Leader Mitch McConnell was much worse for the country than Osama bin Laden, referring to 10,000 gun-related deaths that have taken place this year and the fact that McConnell has so far not brought any gun safety legislation to the floor. Carrey posted his accusation along with a cartoon of a $100 bill being dipped in blood.

10,000 gun deaths in 2019 and the year is far from over. What Osama bin Laden did to us was terrible but he doesn’t hold a candle to Mitch McConnell. pic.twitter.com/o68JXxWlUX

According to The Washington Examiner, nearly 3,000 Americans were murdered in the 9/11 attacks. Contrast this with FBI reports stating that 10,982 Americans were killed by firearms in 2017, of whom 403 were killed by a rifle, and 7,032 were killed by handguns. Carrey's drawing is the latest in a long line of provocative political cartoons, mostly disparaging Republicans and the Trump administration. The tweet came a day after McConnell was noncommittal about his stance on gun control legislation in the light of a recent shooting in West Texas, telling conservative radio host Hugh Hewitt that any gun control legislation would have to wait until President Donald Trump decides on measures that the administration could support. “Well, we’re in a discussion about what to do on the gun issue in the wake of these horrendous shootings,” McConnell said. “I said several weeks ago that if the president took a position on a bill so that we knew we would actually be making a law and not just having serial votes, I'd be happy to put it on the floor.” McConnell is being criticized currently for blocking legislation that would strengthen background check requirements for gun purchases from the Senate floor. That bill was passed by Democrats in the House of Representatives in February this year.

Carrey told USA Today that he does not see his political art as a career move, but instead as his compulsion to speak against an administration he considers evil. The illustrations, drawn mostly in Sharpie, are fueled by inspiration, Carrey says. “They just keep coming. They just happen. Some concern comes up and some twist comes out of the news,” he said. His Twitter feed displays hundreds of drawings, ranging from the surreal (Trump's face as a piece of toast) to the more literal (Jeffery Epstein as a scaly-faced lizard person).