Jennifer Aniston Shares Adorable Throwback Picture With Dad: "Christmas With One Of My Creators"

While most of her throwback posts so far have featured her longtime friends or just her cute self, it was her father Jennifer was thinking of on the special occasion of Christmas. 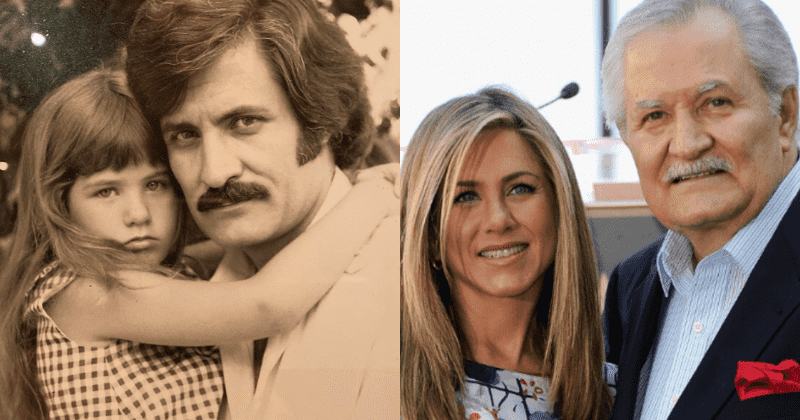 Jennifer Aniston may be relatively new to Instagram but if there's one thing we've learned from the 20 posts she's made so far, it's that she's got an incredibly strong throwback game. Since breaking the popular social media platform with her very first post, and in addition to keeping fans updated with her current life, the actress has been making up for lost time by sharing absolute gems from the past. While most of her throwback posts so far have featured her longtime friends or just her cute self, it was her father she was thinking of on the special occasion of Christmas.

The 50-year-old actress shared a sepia-tinted photo of her actor father John Aniston on Thursday, in which little Jen can be seen snuggling up to the Days of Our Lives star with her tiny arms wrapped around his neck. She also shared a second—more recent—snap of the father-daughter duo in which both are seen smiling next to one another with Jennifer leaning her head on her dad’s shoulder. Christmas with one of my creators. Then and now #TBT Love you, papa, she captioned the sweet throwback post.

According to Daily Mail, John—who is best known for his longtime role as Victor Kiriakis on the soap opera Days of Our Lives—was married to the Dumplin' star's late mother, Nancy Dow, from 1965 to 1980. Speaking to The Hollywood Reporter in 2012, Jennifer revealed that her father wasn't too keen about her joining show business. "My dad’s advice has always been: 'Don’t do it. Become a doctor. Become a lawyer.' He didn’t want me to be heartbroken because he knew it was a tough business. It compelled me to go for it even harder. Do what keeps you happy, and don’t ever let people box you in," she said.

Jennifer added, "There was a period when I was on Friends where The Good Girl came to me, or [2006’s] Friends With Money came to me. I thought, I’ve got to go for it now and try to not just be Rachel Green so I can get out of the Fruity Pebbles section at the grocery and explore the organic food. It’s a terrible analogy, but I had to get out there and do something different so they could see that I’m an actor, so I didn’t forget that I could do other things. I was lucky that happened."

John recalled how he tried to dissuade his daughter from a career in show business during an interview with The Television Academy Foundation earlier this year, saying, "I told her, 'You don't want to be in show business - show business stinks!'" He revealed that undeterred by his warnings, Jennifer had once contacted his agent in hopes of getting her an audition for a movie. "She called my agent!' he said. 'So that's when I knew she wanted to be in show business... I knew right from the beginning when she started auditioning for things,'" he said.