The actress opened up about her father's estrangement in a 1999 interview with 'The Rolling Stone', revealing that it was the most painful time in her life. 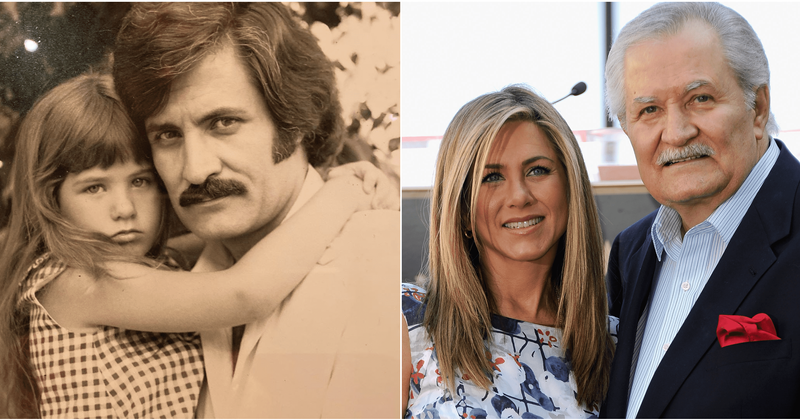 Since joining Instagram in October, America's sweetheart Jennifer Aniston has given her fans a candid insight into her life. From never before seen photographs from her past to glimpses of her star-studded day-to-day life, the actress's profile has a distinct funny, glamorous, personal tone to it. Keeping in line with her girl-next-door persona, the 50-year-old recently shared an adorable throwback snap of herself and her actor father John Aniston. The sepia-tinted photo featured little Jen snuggling up to the Days of Our Lives star with her tiny arms wrapped around his neck and had the internet go "aww" in unison.

While the photo paints the picture of a carefree childhood, Jennifer's childhood was far from easy and untroubled. John—who was married to Jennifer's late mother, Nancy Dow, from 1965 to 1980—is said to have abandoned his daughter and wife when the F.R.I.E.N.D.S star was a young girl. Having a parent walkout is heartbreaking for every child, and Jennifer remembers it as the most painful time of her life. Despite the overwhelming pain and sorrow she felt as a child, and as an adult, the actress has moved on to graciously accept their relationship the way it is and let bygones be bygones.

Opening up about her difficult childhood and father's estrangement in a 1999 interview with The Rolling Stone, the Dumplin' star revealed that she was shocked when her mother broke the news to her. "My mom told me. I went to a birthday party, and when I came back, she said, 'Your father's not going to be around here for a little while.' She didn't say he was gone forever. I don't know if I blocked it, but I just remember sitting there, crying, not understanding that he was gone. I don't know what I did later that night or the next day. I don't remember anything other than it being odd that all of a sudden my father wasn't there. And he was gone for a while," she said.

Aniston did not hear from her father for almost a year after that. "He just called one day and said, 'Let's go see The Fantasticks.' So we had a little dinner and saw the show. After that, I started seeing him on weekends, and this new way of life just unfolded," she said, admitting that when he came back into her life, rather than be angry at her for leaving, she'd constantly try to please him in the hopes that he wouldn't abandon her again.

The actress eventually got the chance to better understand why her father left, which helped her come to terms with it. Revealing how John explained why left, Jennifer said, "He does. Though not at first. Like I said, he's not a good communicator. Maybe if my parents had talked more. There were signs, but also, knowing my father, he probably didn't say anything. But, as best he could, my dad explained and apologized, and it's enough. We've made up. There are still parts that are hard for me, but I'm an adult. I can't blame my parents anymore."

Despite the strain on their relationship in the past, John went on to become one of the most important people in his daughter's life, even giving her career advice when Aniston first began considering becoming an actress. Speaking to The Hollywood Reporter in 2012, she revealed that her father wasn't too keen about her joining show business, saying, "My dad’s advice has always been: 'Don’t do it. Become a doctor. Become a lawyer.' He didn’t want me to be heartbroken because he knew it was a tough business. It compelled me to go for it even harder. Do what keeps you happy, and don’t ever let people box you in."