For her upcoming role in "Hustlers", the star went through some brutal training to be able to perform convincingly as a veteran pole dancer. 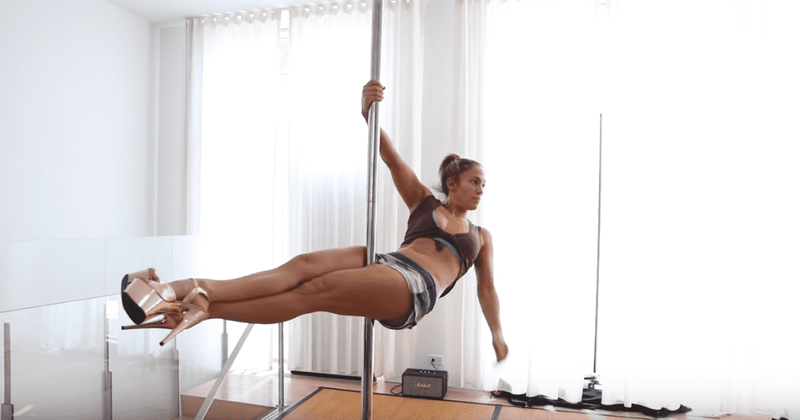 Jennifer Lopez just turned 50 years old. Let's just remember that for a minute before we tell you that for her role in the upcoming film Hustlers, JLo learned to pole dance like a pro in just six weeks. Yup. in the film, which also stars Constance Wu, Lili Reinhart, Keke Palmer, and Cardi B, is based on the true story of a group of strippers who drugged and scammed their high-profile Wall Street clients, Lopez plays a veteran stripper and does all her pole dance routines herself - so of course, she had to master the art form. In a just-released behind the scenes video, we get to see the brutal training that JLo went through to achieve that goal.

The video chronicles the Grammy-winner's entire process, trained by dancer and choreographer Johanna Sapakie, right from her first training session to her first day of shoot for the film where she had to perform a routine on-camera. While some of the other Hustlers cast members could manage with novice training, since their characters were just starting out as dancers, JLo had to work to get to the point where she could perform just as well as a long-established pole dancer. Lopez started training with Sapakie two and a half months before filming began, and trained two to three times a week in hour-long sessions. And even with Lopez's touring schedule as busy as it was, she couldn't afford to take any breaks. "That was the point of making sure she had a pole in any city she was in," Sapakie, whi has almost a decade of pole dancing experience and has worked as an acrobat in Cirque du Soleil, told Harper's Bazaar. "And I would go to her wherever she was at, so that within for a crazy busy schedule, we would lock out a pole training."

JLo's pole dancing training started with climbing the pole, then spinning, before she learned to flip upside down. "Spinning can be disorienting for people who aren't used to it, it's different too because she's a dancer. When you're a dancer, you spin on top of yourself, and as a pole dancer, you're like a carousel going around a fixed point," Sapakie explained. "The last piece of the puzzle was getting her inverted and upside down. We wanted one big “wow” moment where she turned upside down. So that was the last thing we tackled to make sure that she could handle that. And she nailed it." Of course, true to character, Lopez had to train in 6-inch Lucite platform heels the entire time. “This is just as hard as anything I’ve ever learned. It might be the hardest,” Lopez says at one point in the video. “I’ve never been bruised like this for anything I’ve done.”

"It's actually really difficult to do these moves," Lopez told Fandango in an interview. "It takes skill. It's not like any person can just jump up there and do this ... I had a lot of bruises and things." But, she admitted, she'd fallen in love with the heels. "When you first put them on you're like a baby deer," she said of the sky-high platforms. "You're walking around, you're fine, and then all of a sudden, your legs give out. And then all of a sudden they're like ballet slippers and you can't do the dance without them." Hustlers releases in theatres around the country on September 13.