Called the Jell-O Play, the confectionary maker released a line of gelatin products designed for parents and kids to have fun making shapes. 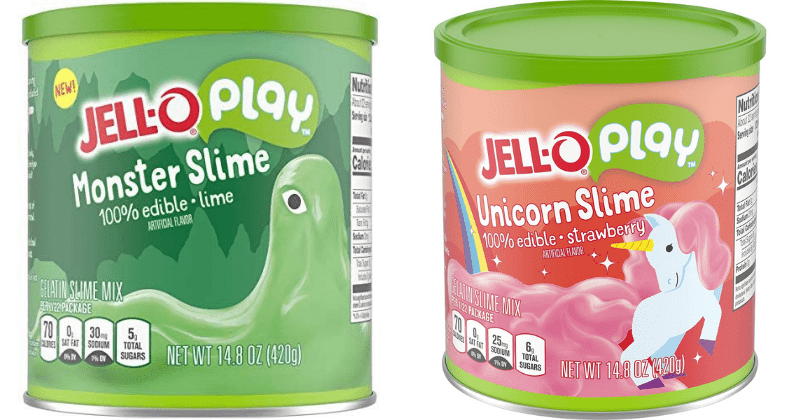 As kids, we've all been guilty of playing with our food and have even been yelled at for doing so by our parents. But, Jell-O doesn't seem to agree with them, considering what they've launched recently. They've just released edible slime which can either be a dream come true or a total nightmare depending on the ages of the people you ask. Called the Jell-O Play, the confectionary maker released a line of "gelatin products" made for parents and kids to have a gala time molding shapes and objects, and eating them too, reports Today.

JELL-O PLAY edible slime is a powdered mix and comes in unicorn and monster ‘flavors.’ pic.twitter.com/SdK6NcrcC9

This edible slime is available on Amazon comes in two exciting flavors —Monster (lime) and Unicorn (strawberry)—and are packed in 14.8-ounce containers. Priced at  $4.97, the Jell-O slime uses food-grade items such as food starch, sugar, gelatin, and less than two percent of adipic acid, sodium citrate, disodium phosphate, artificial flavor, food coloring such as red, yellow, and blue, and fumaric acid. On the other hand, traditional slime is unedible and is made of glue and Borax. The product comes as a great alternative to Borax, which is said to be harmful to kids in some cases. Also known as sodium tetraborate, Borax is a natural mineral used in laundry and house cleaning. A few years ago, a mother had alleged that her daughter had suffered second and third-degree burns on her hands after she repeatedly made slime with it.

Slime has become a huge phenomenon in recent years going by the numerous viral how-to videos. It even led to tween entrepreneurs to start their own slime business and spurred thousands of videos on Youtube and other sites. So, it's no surprise that Jell-O too decided to take the plunge in the popular world of gooey slime.

Currently, Jell-O's new product is a "best seller" on Amazon although there have been mixed reactions to it. Stefan Metzger wrote: "This mixes terribly. It says edible, but it tastes like rotten crotch that hasn't been washed in 4 days then lightly sprayed with dollar tree perfume. Reminds me of my ex." Another customer, DK, added: "The consistency of this slime was awful. We experimented a lot with it; adding more water or more powder but it was never 'just right.' It was either too stiff like cornstarch or too sticky. It made a pretty big mess and crumbled when dry. My girls still loved it but I did not. They said it tasted bad but I didn't try."

However, there were some who differed and said the product worked well. Illusionz wrote: "My son had a blast with this. The first time I ever saw this product was when it first came out and the reviews scared me a bit so I never bought it. I regret not doing so sooner! My son was so excited that he could play AND eat it. Being stuck at home with not much to do, I decided to give him this edible slime. He loved it. Afterward, he said he enjoyed that he could change the consistency by adding more water when he wanted."  Heather Wallace added: "Good price for a large amount of slime. The package makes 2 things of slime, and safe if my 2-year-old eats some when my back is turned." NC wrote: "This product is great for kids and sensory activities. I bought it for a kids' playgroup and they had a blast."

If you were disgusted/puzzled by kids playing with slime, you ain't seen nothing yet..