The singer-songwriter performed with his wife, Kim, and son Henry on 'The Tonight Show' from home 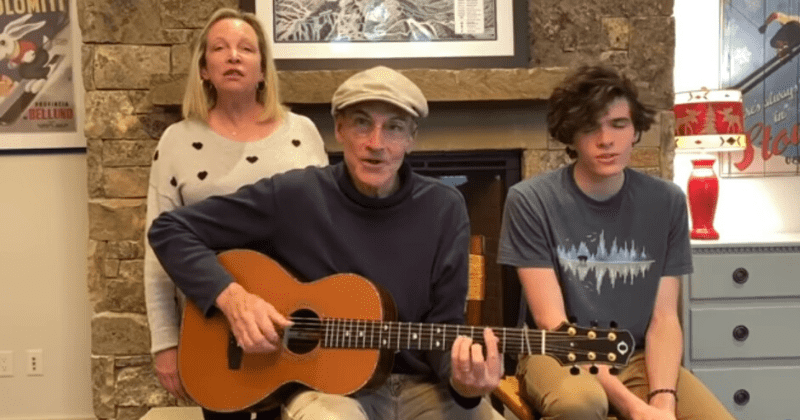 Legendary singer-songwriter James Taylor gave a sweet performance of one of his greatest hits on Jimmy Fallon's The Tonight Show from the comfort of his home in Montana. But it was not just Taylor who performed as he sang the hit "You Can Close Your Eyes." His wife Kim and his son Henry joined him with their heavenly harmonies that made the performance truly memorable. As Taylor strummed the guitar seated on a chair with his son beside him,  his wife stood behind him. The song was one of his hits on the Mud Slide Slim and the Blue Horizon album that was released in 1971. This is one of Taylors' most well-known song and is often called a lullaby. A number of artists from Carly Simon, Linda Ronstadt to Sheryl Crow, Sting, Eddie Vedder have covered the song.

Well, the sun is surely sinking down, But the moon is slowly rising, And this old world must still be spinning 'round, And I still love you, Taylor began. At certain points in the song, he looks back lovingly at his wife who also reciprocates with a warm smile as she sings along. Fallon introduces Taylor and he appears to be seated in his living room. With the ongoing pandemic, a number of talk show hosts and artists have performed from the comforts of their home.  A lot of people were moved by the wonderful performance of the musician and his family. Best selling author, Steve Silberman, wrote: OMG, you need this now, badly. James Taylor sings one of his most beautiful songs with his family from quarantine.

Suzanne Martin commended Taylor's performance and added: Ok , I was going to bed when I heard James Taylor was going to be on Jimmy Fallon so I stayed up. OMG I’m sure it’s online/YouTube. He had his wife and son with him and they sang Close your eyes. It was beautiful. Another fan Salzano called it a beautiful family moment and wrote: James Taylor performing from home on the Jimmy Fallon show. Such a beautifully captured family moment. There were many more comments on Facebook from Taylor's fans. Liz Kenny Christides called it 'Fantastic!' and added: Thanks James for another great song and loved hearing your talented family join in. The glances and gestures spoke a thousand words! ❤️  Sharon McWilliams noted that the performance: Precious and priceless...you and your beautiful family. Your gift of music delights our hearts and soothes our souls. Thank you so much🙏🏻💗🤗👏

Another fan Gabrielle Gewirtz said she had been practicing the song on her own guitar: I’m in NYC since March taking care of my mom. (I live in Colorado - my husband is there) I left a guitar at moms years ago. This song is the one I have been playing most often since being here. Thank you. Beautiful. Gloria DeJohn Kreitzberg stated: James, you shaped my views of the world when I was a teenager, inspiring me, giving me hope of love, and calming my fears. You do all those things even today for me. I cannot thank you enough. I’m an artist and drew a portrait of you when I was 18. Some day I may find it buried somewhere..... sending love to you.

According to Rolling Stones, Taylor was announced to be a part of the18th season of The Voice as the show’s mega mentor. Despite postponing his shows due to the current pandemic, he generously donated $1 million to Massachusetts General Hospital.

Earlier this year, he released a new album in February. "In terms of how they were performed and recorded before, we paid attention to the chords and melody. But we were interested in doing something new, and in bringing something new to it, we’ve reinterpreted the songs, that’s what makes it worth doing," Taylor noted.