The 'School of Rock' star attempted the challenge a little too late but we're glad that it happened. 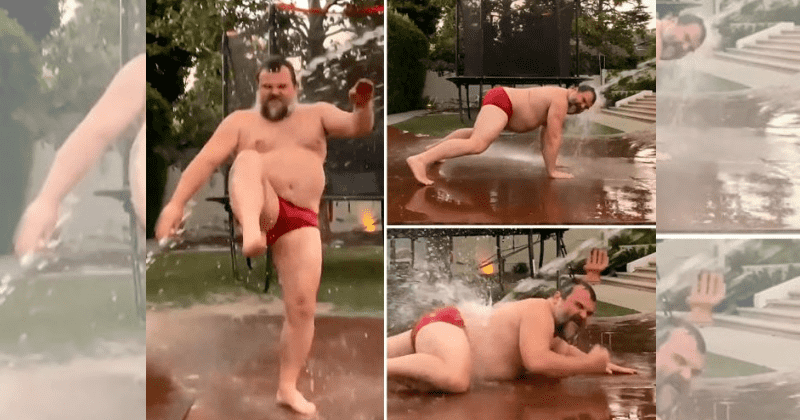 Jack Black has always been one to bring the funny wherever he goes. His role as Dewey Finn, a hilarious substitute teacher in School of Rock had us in stitches 17 years ago, and even more recently in the Jumanji movies. The 51-year-old actor has been a tad over the top but nevertheless a comedy gold over these years and he doesn't plan to stop anytime soon. And now, he's been twerking up a storm by posting his very own entry into the Cardi B and Megan Thee Stallion‘s viral “WAP” dance challenge, reports USMagazine.

The video posted on Instagram on Sunday, November 15, is typical of Black as we see him gyrating while sporting a red Speedo swimsuit. "CHALLENGE ACCEPTED", he wrote on the social media site as he twerked away by the family's pool, drenched in water, and sprayed water from a hose off camera. His post received plenty of response, one of them being his long-time friend and Hollywood A-lister Robert Downey Jr. "Get it !!!", the Sherlock Holmes star wrote as others followed up with thousands of comments. Jeremy Renner, Jessica Chastain, Joel McHale, Colin Hanks, and several others posted their reactions to Black dancing to the NSFW song.

.#JackBlack hopped on the viral 'WAP' dance challenge a bit late, but it was 100% WORTH THE WAIT! 😂https://t.co/EMJenDqV8Y

"Nothing but love for ya brother," Avengers star Renner, 49, wrote. "😂YES TO THIS😂", wrote Chastain. McHale called Black's semi-naked dance video "the best thing that ever happened." Having been posted just yesterday, the video has received over 1.37 million likes on the post. Black is no stranger to taking the internet by storm with several such videos on TikTok. Since the pandemic hit in March, the actor has become somewhat of a revelation showing off his "stay at home dance". In one of the videos, Black went shirtless in a pair of cowboy boots and athletic shorts and etched himself into the TikTok lore forever.

The WAP challenge he attempted has been a rage all over the world since the song debuted back in August. The song featuring two of the most popular Hip Hop stars became a huge deal owing to the racy lyrics, uncanny visuals, and also for the cameos from Normani and Kylie Jenner. The song is especially explicit for the several NSFW references it makes but Cardi admitted around the launch of the video that she would rather not use certain words in her songs at all costs. Speaking at The Kyle & Jackie O Show, she said: "'Discharge’ is kind of gross, but it’s not, like, a cringey word. A cringey word to me is ‘moist.’ I hate the word ‘moist'. And I hate the word ‘horchata.’ It’s like a Mexican drink that is made out of, like, brown sugar or something. I don’t even know what the hell they put in it, but it’s really good, but I just hate that word."

Jack Black Did The "WAP" Challenge On TikTok And Things Got Wet https://t.co/8g658KNXqC

The challenge will not last for long in the crazy world of social media challenges but one thing is for certain - Black's surprisingly good moves and the hilarious nature of it is going to be in our minds for a long time.

None of us asked for @jackblack to do the #wapchallenge in a red speedo, but I think we all NEEDED it!

This is guaranteed to make you laugh today --> https://t.co/ybcloTVkag@KirstiinJFM #JackBlack #YYC #985VirginRadio