Mary Poppins Is Being Called Racist For Using Blackface: "It's A Parody Of Black Menace"

Daniel Pollack-Pelzner from Linfield College has called the film and its songs racist for perpetuating stereotypes of black people. 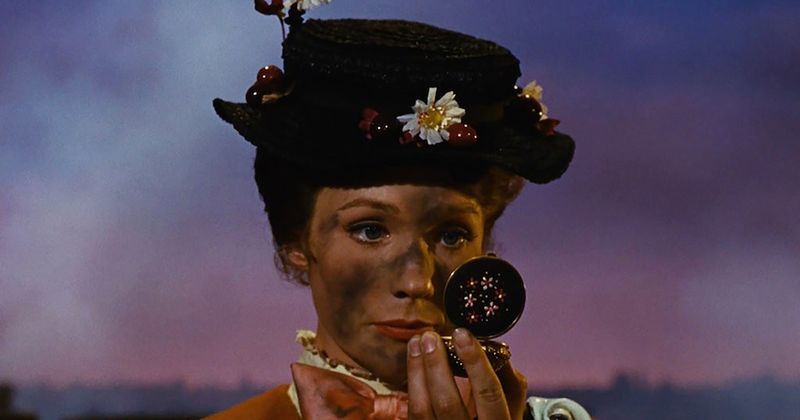 Mary Poppins was originally a character developed by author P. L. Travers and featured in his Mary Poppins books. She was popularized by the Disney production of the same name which premiered in 1964. Poppins, a magical English nanny, transforms the lives of the Banks family when she is hired to look after Mr. Banks's children, Jane and Michael. While the movie has received a total of 13 Academy Awards nominations, even winning 5, it seems that not everyone is as thrilled with the film. English, Gender Studies, and Shakespeare professor at Linfield College, Daniel Pollack-Pelzner believes that some of the songs, 'Chim-Chim-Cheree' and 'Step in Time,' in particular, have racist allusions that taint the otherwise whimsical fantasy film.

In an op-ed piece written in The New York Times, he suggests that both the 1964 version as well as the 2018 version featuring Emily Blunt as Mary Poppins is clouded by performances that include the tradition of blackface, a form of theatrical make-up used predominantly by non-black performers to represent a caricature of a black person. The form has been widely regarded as racist and bigoted, gaining popularity during the 19th century at the peak of the slave trade.

Pollack-Pelzner asserts, "Part of the new film’s nostalgia, however, is bound up in a blackface performance tradition that persists throughout the Mary Poppins canon, from P. L. Travers’s books to Disney’s 1964 adaptation, with disturbing echoes in the studio’s newest take on the material, Mary Poppins Returns." He accuses Mary Poppins of "blacking up" during the songs about chimney sweeps. While he understands the context of the song, that is, Poppins gets covered in soot when climbing up a chimney with Jane and Michael before dancing with Bert the chimney sweep, he finds the scene "indelible."

In order to better explain the racial connections he makes, he urges readers to look back at the original texts written by Travers. In his books, Travers links the chimney sweeps’ blackened faces with racial caricatures, much like performing in blackface. In Mary Poppins Opens the Door, published in 1943, a housemaid screams "Don't you touch me, you black heathen!" This is said in response to a chimney sweep reaching out his darkened hand towards her. But this is not the only instance Pollack-Pelzner discusses.

He also brings to light another scene when the same chimney sweep tries to approach the cook. As soon as he does, the cook shrieks, "If that Hottentot goes into the chimney, I shall go out the door." The word "Hottentot" is an archaic racial slur for black South Africans. Unfortunately, the usage of this term is recurring in both the texts as well as on screen. The academician writes, "The 1964 film replays this racial panic in a farcical key. When the dark figures of the chimney sweeps step in time on a roof, a naval buffoon, Admiral Boom, shouts, 'We’re being attacked by Hottentots!' and orders his cannon to be fired at the 'cheeky devils.'"

He continues, "We’re in on the joke, such as it is: These aren’t really black Africans; they’re grinning white dancers in blackface. It’s a parody of black menace; it’s even posted on a white nationalist website as evidence of the film’s racial hierarchy. And it’s not only fools like the Admiral who invoke this language. In the 1952 novel Mary Poppins in the Park, the nanny herself tells an upset young Michael, 'I understand that you’re behaving like a Hottentot.'"

Fans of the film have, unsurprisingly, taken great offense to Pollack-Pelzner's claim, expressing their opinions via social media platform Twitter. One user posted, "If you see racism in everything, like, oh I dunno, when Mary f*cking Poppins's face was covered in ash during the chimney sweep scene - you were probably racist, to begin with." ClaireKilner08 asked, "I’m sick of seeing [posts] about Mary Poppins being racist on my social media feeds today. Seriously, the world's gone crazy! Where on earth has this suddenly appeared from?"

“Mary Poppins is being branded as ‘racist’ for the characters being blackened in Chimney Sweep scene”... no it’s being branded as racist yet again by white people that are gaslighting to try and delegitimise racism and make serious cases of racial insensitivity look like a joke.

Find me a person of colour that thinks that that scene is racist .

You won’t .. it will be some soya drinking upper middle class twat instead .https://t.co/YirXYf1nmL

I'm sorry but this latest ultra PC lefty outburst from US academic Daniel Polack-Pelzner is now taking things too far! Mary Poppins is racist because Julie Andrews & Dick Van Dyke come down a chimney and have black soot on their faces? Really?!! #bitofsenseplease

Others, however, took this as a learning opportunity and even reminded everyone not to blow the situation out of proportion. Author Mark Harris posted, "This doesn't mean you have to hate Mary Poppins. It doesn't mean Mary Poppins is canceled. It doesn't mean you're a racist if you like 'Chim-Chim-Cheree.' Can we at least agree that learning new things about a movie and its history is not a threat?" TrilbeeReviews added, "Just jumping in front of this 'story.' You may hear a lot of 'SOCIAL JUSTICE WARRIORS ARE SAYING MARY POPPINS IS RACIST NOW!' One single person picked up a problematic line in one of the original novels. That is the story. Don't buy into the outrage machine. There is no actual outrage here."

I still really like the movie and, as it’s constructed, I don’t think it conveys anything racist but very interesting to read that background. The more you know!

Interesting article. I never realized that "Hottentots" was a derogatory term. I think the only other time I remember its use in popular culture was a reference by the old Bloom County comic. I've assumed this whole time they were a mercenary group like the Hessians.

I can also choose not to read it.

Despite what side of the fence you are on regarding the debate, it cannot be denied that Travers featured many a racial stereotype in his original books about Mary Poppins. While the 1964 and 2018 movies may have been harmless renditions of the books, it is important to recognize the unfortunate past of the films. Mary Poppins may not be the paradigm of minstrel performance history, some of its scenes may rely on outdated archetypes and feature racist undertones.