trending celebrity people lifestyle news animals
24-Year-Old Marries Man Twice Her Age: "It Was Love At First Sight. I'm Not After His Money"

24-Year-Old Marries Man Twice Her Age: "It Was Love At First Sight. I'm Not After His Money"

Najlah Muhammad and John Malott met back in 2017 and became engaged in 2018. The couple is now happily married and lives in their Arizona residence. 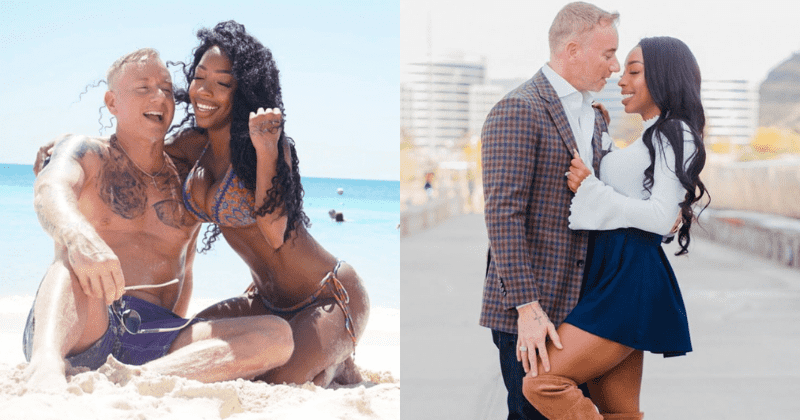 The legitimacy of "Love at first sight" is a highly debated one with people from both sides of the aisles offering arguments as to why their view on the topic is the absolute truth. You'd probably believe the phenomenon is indeed true when you hear the story of this woman who's just got engaged to a father of four, twice her age. According to Daily Mail, fitness coach and entrepreneur Najlah Muhammad, 25, from Arizona claims she fell in love with businessman John Malott, 49, from Wisconsin. The reason? His sick dance moves and dapper dressing sense. The two reportedly met back in 2016 at a nightclub where Malott was celebrating his birthday before being introduced to each other by Muhammad's friend. They claim to have fallen in love within weeks and have been smitten ever since.

As one could determine from the age difference and race, the couple had to bear the brunt of a severe backlash from friends and family due to the nature of their relationship as both families were up in arms and unsure about where it was headed. Malott's 26-year-old daughter refused to even speak to Muhammad for a period of time which resulted in them losing a lot of friends. Some friends even attempted to break them up by claiming that Malott had cheated on her but to no avail as the pair stuck with each other through the rough and trying times. As days turned into weeks, things began to settle down; their families sensed the relationship was quite serious and began to come around. In fact, Malott's daughters have gotten so close to Muhammad, they even go clubbing together from time to time.

The 49-year-old has four daughters; Jessica, 19, Carissa, 26 (who is only two months older to Muhammad), Lauren, 27, and Codi, 10. Of all the children, Carissa did not approve the relationship and was even adamant to a point but according to Muhammad, the two have since grown fond of each other and often go out to parties together. Explaining her roller-coaster ride of a relationship, Muhammad sai,: "I didn't expect I would fall in love within weeks of dating. It was almost love at first sight - within weeks actually. The amount of time we spent together, all day and night, our connection grew very strong. What attracted me to John at first was how well this man could dress. Then when I saw his dance moves and rhythm, I was very impressed. He's also very charismatic, handsome, and has a kind heart."

When asked about the age difference and the race-factor, Muhammad explained,  "It became an 'us against the world' kind of thing. John and I are not the same race - I am black and he is white. John and I are not close in age - he is 48 and I am 24. The combination of those two factors made people feel uncomfortable around us and our relationship. The stares, the uncomfortableness in social settings, the outright hate of our relationship to our faces and especially on social media have been difficult. People sometimes laugh or give dirty looks as if they're confused." Muhammad also recounts the experience of being called a "g**d-d***er" despite having an established and quite successful brand of her own.

Talking about her family's opposition to the relationship, Muhammad said they warmed up to her partner after meeting him and realizing just how smitten and inseparable from each other. The turning point for Muhammad's family arrived when they were all vacationing at Mallot's villa in Mexico back in November 2017. They went out for a meal to connect with each other. When they returned, they all had a surprise awaiting. Mallot took the entire family to the balcony, went down on one knee, and proposed to her. The couple, with blessings from both families, want to have kids in the future. "We most definitely want to have children; John would like a son to carry on his legacy, but we would be happy with a boy or girl or even both," Muhammad said.

The couple got married on June 1, 2019, and has since been living together at Malott's residence in Scottsdale, Arizona ever since. Adding a post on Instagram from her wedding day, Muhammad wrote: "The Happiest Days For the Rest of Our Lives. Can’t get enough of you and I’m so glad I have you."