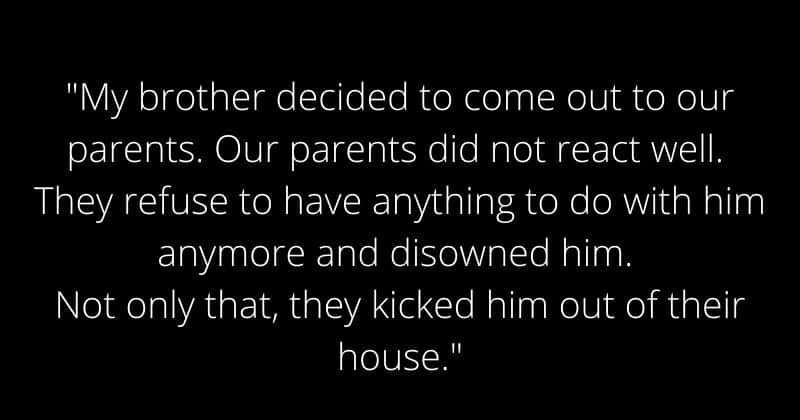 Coming out to family and friends is a big milestone for the LGBTQ+ community, and often the reactions are mixed. While some are fortunate to have a supportive family stand by them, there are others where their family vehemently disapproves because of their orthodox beliefs. This Redditor took to the Am I The A**hole' thread to recount his story of how he cut his elderly parents off financially because they kicked his younger brother out for being gay. The older brother turned to Reddit to seek advice and wanted to know if he was in the wrong for doing so.

He wrote: I’m a 24 year old software engineer originally from an Arab Muslim country. I moved to the United States with my parents when I was five years old, and my younger brother was born here. He is now 16. A year ago, my brother came out to me as gay. It wasn’t a surprise to me, I’ve always been very close to my brother. We grew up in a majority white town and my brother was picked on frequently as a kid for being Arab, and on top of that he’s always been very shy and quiet, so I was the number one person my brother confided in while growing up. I’ve known he was gay for years but I let him tell me when he felt comfortable. The Redditor added that he was completely supportive and even joked about meeting his future brother-in-law. But the next big hurdle they had to overcome was telling their parents.

He continued: Our parents, however, are very, very homophobic. I know you guys in America have experience with homophobia too, but trust me when I say you have no idea the extent of it in fundamentalist Muslim countries. He added:My parents are in their seventies and are both retired. They spent most of their careers back in their home countries and never built any savings in America, due to financial strains. We live in their house but I’m the primary breadwinner and I make good money as a software engineer. My job isn’t one that requires me to be physically at work so I have fortunately avoided any negative financial effects from the pandemic.

The Redditor recounted that his brother's decision to come out to his parents wasn't one of impulse, but something that he had carefully deliberated and thought off. Thus, when he did eventually come out to his parents, they decided to disown him. He wrote: Our parents did not react well. They refuse to have anything to do with him anymore and disowned him. Not only that, they kicked him out of their house. He’s been staying with one of his friends. My parents refuse to change their minds no matter what, and knowing the traditions of the people around us where we came from, I do not think they ever will.

Therefore, keeping in mind, how his parents treated their youngest son, the older brother decided to take matters into his own hands and told them that he would not be supporting them financially. In the meanwhile, both brothers have moved out of their family house, and plan to live in an apartment together. However, his extended family have been less than supportive of their decision, blaming the Redditor for abandoning their parents in the middle of a pandemic. He said, I did not think this would be a controversial move, but our relatives, even those in America, have been blowing up my phone telling me I am an asshole for cutting off my elderly parents during a pandemic. My response is they kicked my brother out during a pandemic. I’m not leaving him on the streets no matter what, but even more so during a pandemic.

Most Redditors opined that the elder brother was not the asshole in this situation. byebyelovie said: sorry your parents are assholes! Way to stick up for your little underage brother!!! Definitely 100% NTA for cutting your parents off. TyrannasaurusRecked added: Your brother is a lucky man to have such a sibling. deadlyhausfrau noted: They had to know you'd react like this. I've spent some time in Muslim countries so I know how deep homophobia can be, but you guys have been here in the US for some time now. They can't have assumed you would cut him off. Even if they couldn't support him being gay, they shouldn't have made him homeless in a pandemic. Let some of those angry relatives support them no.

Farmerdoo had a different take on this situation. They said: I’d offer them some cash in exchange for legal custody of your brother and all of his paperwork. They can make your brothers life very hard if they refuse to give up his birth certificate, ss card, medical power, etc. Youtoo2 stated: Its illegal. They are required to financially support him. Brother should call CPS. He is going to need to get legal custody of him.