Iranian Journalist Masih Alinejad revealed the harsh reality of the Islamic Republic saying it "has a history of tormenting women." 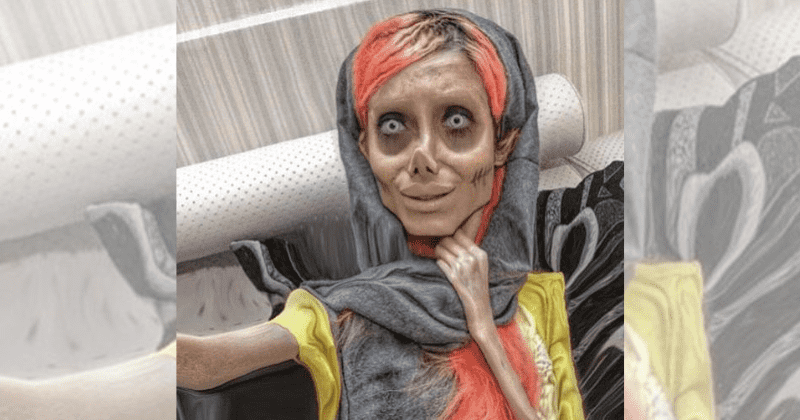 At some point, you would have come across a viral image of a woman looking like a zombie version of Angelina Jolie. The actual face behind this creation was 19-year-old Sahar Tabar from Iran who used makeup and editing to produce the creepy look. Tabar, whose real name is Fatemeh Khishvand, instantly gained 486,000 followers on social media after posting her posing in her eerie, boney face. However, reports say that the Instagram star has been sentenced to a decade in an Iranian prison, a year after she was arrested for her activities on social media.

Although people perceived Tabar posts as a mere joke or as a social commentary, last year on October 5, she was arrested along with three other female Instagram influencers in Iran. Speaking to Mail Online, Iranian Journalist Masih Alinejad shared the details of a conversation she had with Tabar's lawyer. He told her that his client was sentenced to 10 years of jail time recently for "promoting public corruption." According to the outlet, Alinejab initially took to Twitter in a bid to spread the news. 10 years jail for Iranian Instagramer who used make up & Photoshop to become a zombie Angelina Jolie, she wrote.

More photos of Sahar Tabar Who is being charged for promoting corruption by posting these kind of photos on Instagram. https://t.co/l8SmXL1uEc

Sahar Tabar is only 19. Her joke landed her in jail, she wrote. Her mother cries every day to get her innocent daughter freed, continued Alinejad calling on Hollywood star Angelina Jolie to petition for Tabar's release. Dear Angelina Jolie! we need your voice here. Help us, she wrote. In a video, the journalist was heard sharing the harsh reality of the Islamic Republic that "has a history of tormenting women." Furthermore, she said, "We need to be united against this gender apartheid." According to The Guardian, the Instagrammer was charged for disrespecting the Islamic Republic and corrupting young people.

In addition to encouraging youths towards corruption, Tabar was charged with blasphemy, inciting violence, and obtaining income through inappropriate means. After being cleared of two of the four charges, Tabar was hoping to be pardoned but was later detained by the order of Tehran's guidance court which handles "cultural crimes and social and moral corruption." At the time, the Islamic Republic of Iran Broadcasting Channel 3 (IRIB TV3) revealed that the influencer was facing anywhere between three months to two years in jail. Last year in October, her confession was broadcasted in the state. It managed to make people sympathize with her after she expressed her remorse.

This report reportedly described Tabar as "a victim with an abnormal personality and mental state" who looked for "vulgarity" on social media. There were medical records presented to the court which revealed Tabar's visit to psychiatric hospitals and suggested that she was experiencing some mental illness. The lawyers also pointed at the tender age at which she had committed the alleged offenses, but still, she was handed the 10-year sentence. In April this year, a judge denied Tabar bail despite her saying that she had caught COVID-19.

Years ago in Brazil a group of wives went vigilante on cheating spouse. Thought that was a great newsclip. There is a time for group counseling and a time to change the rules.

The young woman rose to prominence in 2017 after she reportedly claimed she had 50 surgeries to look like Oscar-winning actress Angelia Jolie. Later, she confirmed that the uncanny looks were mostly achieved through makeup and editing. During an interview, Tabar confessed that she did not look like her Instagram pictures and that they were heavily edited on Photoshop. "This is Photoshop and makeup. Every time I publish a photo, I paint my face in an increasingly funny way. It is a way of expressing yourself, a kind of art. My fans know that this is not my real face," she said according to Daily Mail.

I remember these pictures. They put her in jail for 10 years for Photoshopping herself in a country where the legal age for marriage for girls is 13. Like, where the actual fuck are their priorities? 😡https://t.co/RprKHCBeDo

In July 2019, she admitted undergoing some surgery including a nose job, lip fillers, and, liposuction and posted a side-by-side picture of her pre and post-surgery face. Although her mother was against this, Tabar continued to post these pictures in an effort to achieve her childhood dream of becoming famous. "I did not even think about being like Jolie. Also, I did not want to resemble the cartoon character the Corpse Bride," she said. "Now I understand that I have something to do with them, but I am a muse myself and remembering someone is not an end in itself."