Reddit recently heard from an insentive ex-husband who explained in detail just how big of an a**hole he had been to his cancer survivor ex-wife. 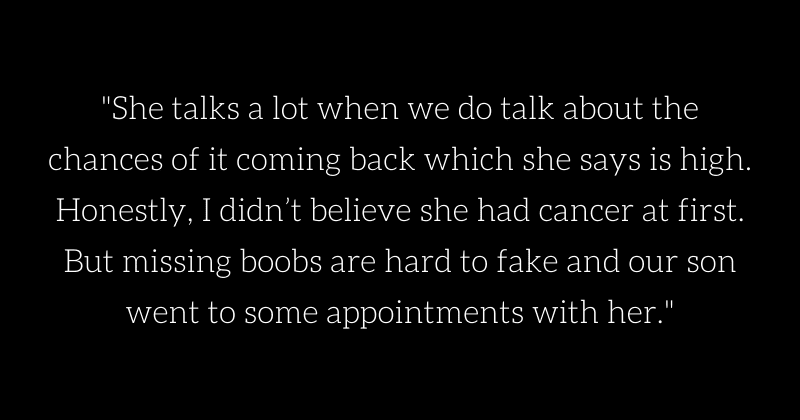 Not many keep things cordial with their exes. However, when there are children in the picture, not everyone can afford to say "good riddance" and walk away from their co-parent. It takes maturity, patience, and sensitivity from both people to make the complicated family dynamic work efficiently. Unfortunately, not everyone is blessed with these qualities and Reddit recently heard from one such individual who explained in detail just how big of an a**hole they'd been to their cancer survivor ex-wife.

Sharing their story with the title "AITA for asking my ex-wife to cool it with the cancer talk," Reddit user u/treattiss wrote, "We have a 9-year-old together. She had breast cancer (mastectomy and chemo) but recovered fairly quickly. She is remarried and has been for 4 years now. She talks a lot when we do talk about the chances of it coming back which she says is high. Honestly, I didn’t believe she had cancer at first. But missing boobs are hard to fake and our son went to come appointments with her."

The Reddit user continued, "My mom’s friend had breast cancer recently and she said that if you take the meds after it is far less likely to return. Now my ex is talking about some tests for ovarian cancer. I am exhausted by the cancer talk. Every email and a list of things she needs me to do just in case something happens and have I done those. It is a long list of meeting with our son’s teachers and his special education teacher and his therapist. Our son is a little bit special needs/ has some medical issues. She handed me a binder to look over and told me to look it over."

While the author's ex-wife clearly seems to be trying to prepare him for the worst, he revealed that he doesn't see any reason to do so. "I just don’t feel the need to study a binder for no reason. She wants me to know things about our son in the event I have to jump in and take over. She likes to remind me how I never even helped during her first treatment. She has started trying to quiz me on things about her son. 'What is his doctor's name?', 'Where is the pharmacy we use?' Etc," u/treattiss revealed.

Although he admits that he doesn't know much about his son his needs, the author shows no interest in stepping up and being a responsible parent. "I travel a lot for work so I admit I don’t know as much as I should. I gave the binder to my mom so she is prepared to step in and help when necessary. She knows she can call my mom whenever but she won’t. Look if something really happened to her or incapacitated her I would step in. I have the binder now and I would learn the things," he justified.

Rather than try to understand his ex-wife's well-meaning intentions, the author lashed out her when she sent him another email. "I got upset the other day after getting yet another email asking if I could tag along to his next doctor's appointment so I could meet the doctor in the event I need to step in. She mentioned cancer again and I lost it. I texted her and told her to cut it out with the cancer talk. It was becoming too much for me and I am so tired of hearing about it. I told her she was unlikely to get it again if she took her medicine and that she was being dramatic. Then I told her I would answer no further messages containing the word cancer unless she found out she was actually dying. I told her all cancer talk should go to her husband. I am sorry she had cancer but I can’t be her friend. I later ended up not being able to make it to the appointment," he wrote.

"Full disclosure: these emails and texts aren’t daily. Probably once every two or three weeks but they are very wordy. I recently talked to my brother who works in the medical profession and he says that she may have had an aggressive cancer but there is no way to know. I have been told I have an issue with dealing with the emotions of other people and may come off as cold so I could use some thoughts of whether I am an a**hole and should maybe it approach it another way," he concluded the post. If u/treattiss was hoping other Reddit users would take his side in this scenario, he was in for a reality check as the r/AmItheAsshole community members quickly deemed him an a**hole for treating his ex-wife the way he did. What do you think? Are his actions justified?