Marshall County Sheriff Phil Sims stated that the officer would have died had the inmates not intervened. 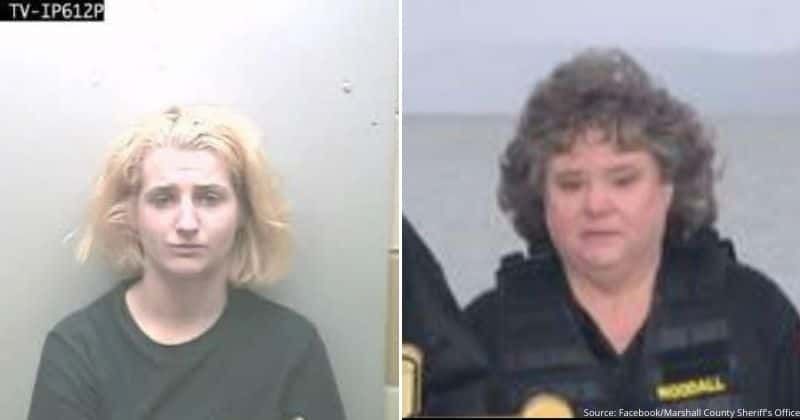 Melissa Woodall, a Marshall County corrections officer narrowly escaped death. She was stabbed multiple times with a scissor by an inmate and is currently recovering from her injuries. Officer Woodall was escorting inmate Emily Sledge from a holding cell to a restroom on Saturday, May 2, 2021, when the attack took place. Sledge began hitting Woodall and both of them fell to the floor. The inmate then pulled a pair of scissors from a draw nearby and began stabbing the officer, per ABC3340. "Inmate has to be escorted through the cubicle where the correction officers work to get to the main jail for the women's block and in doing so when corrections officer Woodall opened the door, inmate Sledge began attacking her," said Marshall County Sheriff Phil Sims.

Alabama Corrections Officer Melissa Woodall was stabbed four times in the head area and once in the arm. https://t.co/uD9YCStT1S

"Miss Woodall was able to reach up and pop the door to the main jail," said Sheriff Sims, according to WAAY 31. Officer Woodall somehow managed to pop the door to the main women’s cell block. Immediately, several inmates rushed to stop the attack and saved Officer Woodall's life in the process. They held Sledge down till other correctional officers arrived.  "Had they not done so, then I believe it's likely miss Woodall would probably been killed," said Sheriff Sims. Sledge stabbed Woodall four times, in the head and neck, just barely scraping by the main artery. "I want to commend the inmates for the decision they made, human decision to come to the aid of another human," said Sims.

Sims then added that correctional officers are trained to handle such incidents, but the jail is extremely overcrowded. Though it's been designed to hold 16 inmates, there are currently 50 of them.  "We're having to use makeshift rooms located next to there, which is on the opposite side of where our corrections officers work as a quarantine as a place to hold people who don't want to behave, people who are disciplinary and so forth," said Sims. The inmates who helped Woodall has been identified as Valerie Moore, Katie Moore, Janice Brooks, Stephanie Grimstad, and Mary Williamson.

This goes to show you can’t judge inmates by their past. They deserve all the recognition in the world.

Emily Sledge was originally charged with possession of a controlled substance when she was first brought in, but as of Monday morning, she has been charged with attempted murder of a corrections officer. On Facebook, Rebecca Waldron her aunt wrote: That's my niece .im so sorry that she even did that. Wanna also thank the inmates for what they did they deserve a shortened sentenced and money on their books. Praying for a speedy recovery. Our family will not stick up for wrongdoings.

Amber Rhianna Mahan Rigsby shared: This is my county and I love that the Sheriff's office made it a point to individually name the inmates that came to her rescue. They didn't have to jump in, they could've not reacted, and she wouldn't be here today. Just because they are spending time in county jail doesn't necessarily mean they are all bad people, and I'm glad our Sheriff recognizes that.  Cindy Carol McLaren added: I'm glad they saved her life why are there scissors close by? Glad my son-in-law decided quickly that being a prison guard is too dangerous and left, there are guards that get stabbed to death and nobody talks about it.