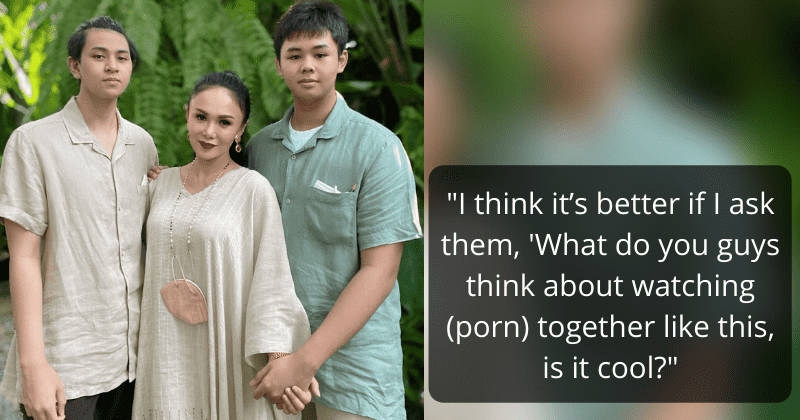 A part of growing up is when teenagers get curious about things they feel like they can't talk to their parents. If parents don't step in to educate them about the hormonal urges at their age, they will turn to unreliable sources on the internet for answers. Sex education is important and dismantling the stigma around it is necessary. Teens will inevitably come across pornography online eventually, by accident or intentionally. But what they learn from it can be harmful. One mom, however, has found a way to ensure her sons don't get the wrong information from porn by watching it with them.

It may seem like the most uncomfortable situation to be in as a parent and as a child, but Yuni Shara disagrees. The 49-year-old mother of two is also a pop star from Indonesia who watches X-rated movies with her sons Cavin Obrient Salomo Siahaan and Cello Obient Siahaan to teach them the dos and don'ts of sex. She has been called "creepy" and other names for doing so but believes it is completely normal. She wants to leave the old ways behind and wants to encourage her sons to be more open-minded as well, according to The Sun.

The psychologist then advises parents to have a healthy discussion with their children and provide "factual sex education, based on science, not based on pornographic films." Speaking to the interviewer, Yuni Shara said, "So, I think it’s better if I ask them, 'What do you guys think about watching (porn) together like this, is it cool?', and they’ll be like 'Mom, don’t be like this.'" She added that her children also happen to be open-minded, which helps. The singer's younger sister, Kris Dayanti, was all praise for the parenting technique and said that it was important her boys get proper sex ed.