Bette Midler hit back at Melania Trump by sharing an old video of the first lady pushing birtherism conspiracy theories. 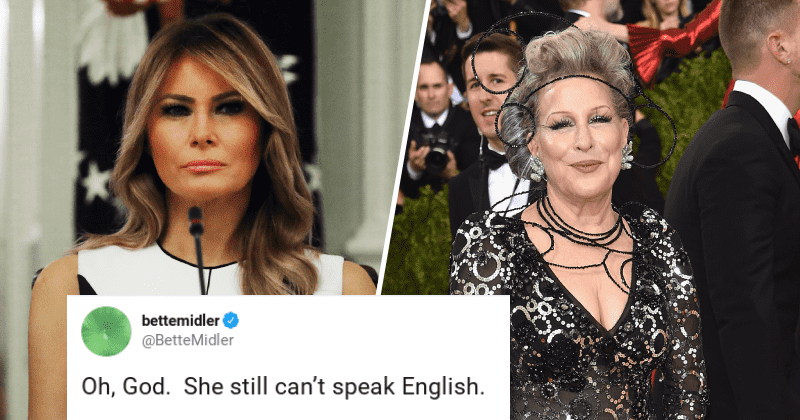 Bette Midler has come under fire after making a xenophobic attack on First Lady Melania Trump. The actor made the comments on Twitter as Melania delivered a speech on the second night of the Republican National Convention from the White House’s Rose Garden, reported The Independent. Midler, who's been a vocal critic of Trump and his family, called Melania a "uge bore" before calling for "that illegal alien" to be taken off stage. She might have only been using Trump's own description of migrants but the actor was criticized for the attack. Oh, God. She still can’t speak English, tweeted Midler during the speech.

Twitter users hit out at the actor for her comments. John Betts wrote: My - how ‘classy’ of you to disparage the accent of someone born in a foreign country. A few pointed out that Melania could speak five languages — Slovenian, English, French, Italian, and German. Another Twitter user commented: She’s on her fifth language, Bette. I’m not nearly as good in my fifth as I am in English. How’s your first language doing? Melania Trump was born in Slovenia and had moved to the US legally in 1996. She married Donald Trump in 2005 before becoming a US citizen a year later, in 2006. Midler tweeted: You are one lucky Slovenian! And after all that surgery, you hit a kind of horrible jackpot, chained to [a] colossal idiot.

“No matter that Donald Trump says, he didn’t do a “good job.” With months of warning and near-infinite resources, he did a worse job than every other government on the entire planet, a job so awful that years from now all we’ll remember is, in a crisis, Trump failed the nation.”

As Twitter users accused Midler of xenophobia, she shared an old video of Melania being racist. In the video, the first lady can be seen pushing the birtherism conspiracy theories. Melania can be seen echoing her husband's demands for Barack Obama to share his birth certificate. This was after the former President already having shown the certificate of live birth. Bette Midler shared the video and wrote: BUSTED! Here’s FLOTUS, in her previous incarnation as a racist and a birther. Now she’s getting the #SaintMelania treatment. Don’t fall for it. She’s no Jackie O, no matter how hard they try.

A reminder that Melania Trump is a racist who encouraged birther conspiracies. #RNC2020 pic.twitter.com/scwXLEMWcr

Midler's comments on Melania didn't ease up as she added, "Melania lacks warmth so severely that I just had to turn my AC down." The actor couldn't digest watching Melania wax lyrical about her husband during the Republican National Convention. Why are they promoting this awful person, Melania? Was it in her contract? She says it feels like just yesterday they were at their first convention. Maybe to you, Mel. For the rest of us, every day has been a horrible slog through the 9th Circle of Hell, she tweeted. Midler also reserved strong words for Donald Trump and his handling of the coronavirus pandemic. Donald Trump has allowed 175,000 Americans to die. He does not know what he is doing; he has no strategy and no plan. He is in over his head. His only interest is Donald Trump, she wrote.

The actor recently labeled the President a murderer. The singer-actor shared a New York Times story titled Inside Trump’s Failure: The Rush to Abandon Leadership Role on the Virus and wrote: One of the saddest documents you will ever read. Donald J Trump is a murderer. Stupid, callous uncaring; all in all the biggest catastrophe to ever befall our poor nation. I can’t stop crying. She had also hit out Trump's obsession with TV ratings. She tweeted: Every aspect of Trump’s crisis management has been annexed by his psychopathology. As Americans die, he boasts about his television ratings. As Americans die, he crows that he’s No. 1 on Facebook, which isn’t close to true. But it is true that all eyes are on him.

Last night at the RNC several speakers, like Melania Trump and Larry Kudlow, spoke about the virus in the past tense.

1,212 virus deaths were reported yesterday, along with 38,712 new infections.

While Republicans and Trump ignored the coronavirus pandemic, Melania Trump addressed the issue at the Republican convention. "My deepest sympathy goes out to everyone who has lost a loved one and my prayers are with those who are ill or suffering. I know many people are anxious and some feel helpless. I want you to know you are not alone," she said, reported CNN.