Black Lives Matter protesters and far-right counter-protesters chanted against each other at Branson, Missouri. 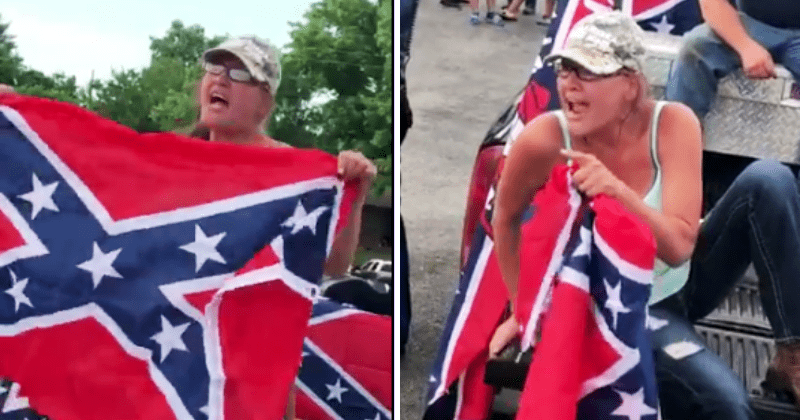 A counter-protester was caught on video spewing hate at Black Lives Matter demonstrators in an incident in Branson, Missouri. The Klu Klux Klan supporter can be heard telling protesters that she'll teach her grandkids to hate them, reminding us yet again what a deeply racist and spiteful organization the KKK is. Over 65 Black Lives Matter supporters gathered outside Dixie Outfitters, a clothing store in Branson, Missouri to be vocal about their demand for an end to racial inequality, systemic racism, and police brutality. The protesters chose that particular location after it came to light in 2015 that the clothing store's owner had close ties to the Klu Klux Klan, according to Springfield News-Leader.

Sometimes the racists just come out and show themselves.

This woman was part of a counter-protest to a #BlackLivesMatter rally in Branson, Missouri today.

After learning that there was going to be a protest outside Dixie Outfitters, around 50 counter-protesters turned up with confederate flags to intimidate the protesters. The counter-protesters included Kathy Jenkins, the woman caught on video spewing hate at the protesters. The woman was sitting at the back of a pickup truck and arguing with the protesters. She donned a camouflage “Make America Great Again” hat and waved the Confederate flag at them aggressively. Jenkins points her finger at them aggressively and tells them, "I will teach my grandchildren to hate you all.” She then stands on the truck and screams at then to "suck on this," before wrapping it like a cape on her back. The video ends with her pumping her fist and shouting "KKK belief."

Can’t believe she said, “I will teach my kids to hate.”

People like her is why we have to continue to protest to show that #BlackLivesMatter. She makes me sick.

"It's not just Black lives matter," said Kathy Jenkins. "It's about white lives matter. Cops' lives matter. Our officers are being f***ing beaten and killed, and they are not being recognized at all," said Jenkins. The protesters chanted "Ban the Klan" at the counter-protesters. This is the second Black Lives Matter protest organized outside Dixie Outfitters. "We need to show the cowards and the complacent that justice matters," said Audrea, a woman at the protest. "If we stay at home and say it to ourselves, nothing is going to change." The far-right groups chanted All Lives Matter and waved Confederate flags. White nationalists like to claim that the Confederate flag has nothing to do with slavery but the origin of the Confederacy is itself based on Southern states' refusal to end slavery. The Anti-Defamation League has stated that the Confederate flag is "a symbol of white supremacy and slavery." Mark Pitcavage, senior research fellow at the Anti-Defamation League’s Center on Extremism, said, "Which is why white supremacists throughout the years have flown the flag themselves because they, too, acknowledge it as a symbol of white supremacy.”

Sen Mitch McConnell has no problem taking pictures in front of the Confederate flag. Only racists loved that flag. Now you understand why he doesn't want reparations. pic.twitter.com/n6vuMW1yso

While both groups of protesters exchanged words, the police ensured that no physical altercation broke out at the area with both protests ending peacefully. Protests broke out in all fifty states across America after George Floyd, a 46-year-old Black man was killed by a White Minneapolis cop, Derek Chauvin, who kneeled on Floyd's neck for over eight minutes causing asphyxiation. The video footage of the incident sent shockwaves across America.

The worst thing is the kids in the background being taught hate and evil.

While the white population tends to romanticize the Confederacy, make no mistake, it was built on the foundation of racism and its symbolism continues to represent hate, as the video featuring the spiteful woman proves. The Confederacy was a government of 11 Southern states that seceded from the Union in 1860–61 for refusing to comply with the government's call to end slavery. The Confederacy committed treason to form a separate government within the Union. The Confederate government lasted merely five years but continues to be celebrated because it represents white supremacy. The flags of the confederate state are a staple at Trump rallies and Republican conventions, and it's yet another reminder that a white supremacist state is what many still aspire for, in America.