After a successful career in marketing, David Deutchman, spent more than 15 years bringing comfort to ailing kids at the hospital. 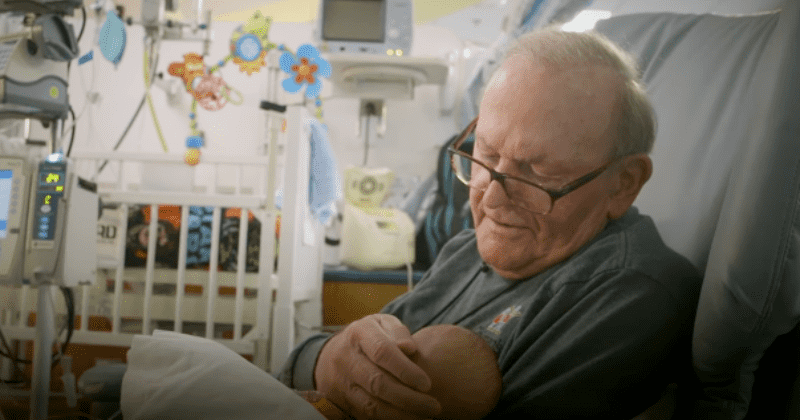 When a friend once asked David Deutchman what he did at the Children’s Healthcare of Atlanta, he replied, "I hold babies." The "ICU Grandpa" who had brought comfort to ailing babies and children by cuddling them has passed away from pancreatic cancer at the age of 86. He had volunteered at Children’s Healthcare of Atlanta for over 15 years after retiring from his job in marketing. He became known as "ICU Grandpa" as more and more families sought Deutchman to cuddle their babies. He was a shining beacon of hope for sick children and their parents. Deutchman died less than two and a half weeks after being diagnosed with stage IV pancreatic cancer on November 14.

Deutchman loved his volunteering stint at the hospital. "Volunteering absolutely enriched his life," Deutchman's daughter, Susan Lilly, 55, told TODAY. "The most meaningful part was the actual time he spent with these patients and their families." Deutchman had a successful business career, but it was his stint at the hospital that he treasured and he spoke about it often with his loved ones. Deutchman started volunteering at the hospital to kill time. He was at a nearby rehab facility when he saw Children’s Healthcare of Atlanta and walked in to ask if he could volunteer. A seemingly spontaneous decision would bring him so much happiness for years to come. After being given basic training, Deutchman became a source of comfort for families waiting on their ailing kids.

His daughter, Susan Lilly, said he was doing it for others as much as for himself. "He said, on many on many occasions, 'I don't know how much people realize how much more I get out of this than what I put in,'" said Lilly. He often told her that he appreciated the parents just as much they had him for comforting their baby. "The emotional support he was able to provide for primarily, mothers, but also many of the fathers and extended family members, brothers, sisters, grandmas, grandpas, (was important). He was almost like a clergy member or a social worker," said Lilly. He would also follow up on the lives of many families and even making it a point to visit them if they returned to the hospital.

After watching her father carve out a successful career in marketing, volunteering at Children’s Healthcare of Atlanta gave him a renewed purpose. "This was definitely a new purpose for him and something that enriched his life," Lilly said. "It brought us great pleasure to see him having that impact. Why not share his love with people who could use it at their most vulnerable times?"

In 2017, the story of our "ICU Grandpa" touched people all over the world. Last week, we learned he has stage IV pancreatic cancer. To honor this legend, our employees organized a drive-by parade outside his home—complete with a NICU transport truck and🚁. pic.twitter.com/NsS5fuFtK2

Deutchman had volunteered until he was 85 in November 2019 and had been contemplating retiring as a volunteer. Then the pandemic struck, which caused the hospital to put the volunteer program on hold. He got weaker as the year progressed and was diagnosed with stage IV metastatic pancreatic cancer during a hospital visit on October 27. "None of us expected to get such a dire diagnosis," said Lilly. "He made it very clear to all his loved ones and even his friends that he feels grateful to have lived a full and rich life." After learning of his diagnosis the staff at Children's Healthcare of Atlanta and the community held a parade to show him what he meant to all of them. "We appreciate the outpouring of support," said Lilly at the time. Deutchman is survived by his wife of 58 years, Ronnie; his daughters, Susan Lilly and Jill Deutchman; and his grandchildren and great-grandchildren. His daughter Lilly is hoping Deutchman serves as an inspiration to others. "Volunteerism and being of service to others is deeply rewarding," she added.