trending celebrity people lifestyle news animals
ICE Forcing Muslim Detainees To Eat Pork, Or Starve To Death, Says Report: "It Is What It Is"

ICE Forcing Muslim Detainees To Eat Pork, Or Starve To Death, Says Report: "It Is What It Is"

There have been multiple reports of ICE officials confiscating religious items such as holy books from detainees. 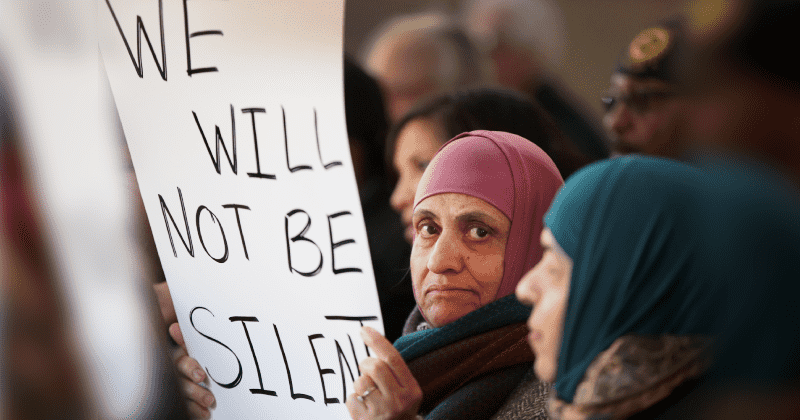 An ICE facility in Florida has been violating the religious beliefs of the detainees by forcing them to eat pork, a food prohibited by Islam, during the pandemic according to a letter. Civil rights lawyers wrote a letter to the facility detailing the complaints against the detention facility accusing it of breaking federal law. The Immigration and Customs Enforcement (ICE) detention facility was also guilty of giving them food well past its expiration date, making them ill, according to the letter. When the detainees asked the facility’s chaplain about serving them pork and stale food, he nonchalantly replied, "It is what it is." The civil rights lawyers said Muslim detainees had no choice but to choose between eating pork, consuming stale food, or starving to death, reported Forbes. ICE has a history of violating religious rights of detainees.

"ICE officers at Krome have repeatedly served pork or pork-based products to Muslim detainees, contrary to the detainees’ sincerely held religious belief that they are forbidden from consuming pork," wrote the lawyers representing civil rights organization Muslim Advocates and Americans for Immigrant Justice. The letter claims that ICE officers at Krome, Miami were well aware of the presence of dozens of Muslim detainees and their faith-based dietary restrictions but continued to serve them pork. The letter claims the ICE officials served them "pork sausage, pork ribs, and other pork-based ingredients during the pandemic." They also accused the officials of unambiguously including pork in pre-plated meals at least 2-3 times a week.

These horrifying ICE reports are not one-off incidents.

ICE, like many unjust structures, is not “broken.” It is operating in the logical conclusions of its founding.

ICE is structured for dehumanization. Experts warned abt this in its creation in ‘03.

Another way is possible. https://t.co/QRgkowUlId

This comes after America sanctioned multiple high-ranking officials in China’s Communist Party for human rights abuses against Uighur Muslims in July. China has also been accused of force-feeding pork to Uighur Muslims. The letter claimed that when Muslim detainees were given halal meals — food that fit their religious dietary restrictions — they were often spoiled, making the detainees sick. The civil rights lawyers also supplied a photocopy of the halal meal food labels that showed the meals to have expired in August 2017 before being allegedly served to detainees in December 2017.

Forcing Muslims to eat pork when it is against their faith is a disgusting outrage. Donald Trump and Republicans claim they care about freedom of religion, but that has always been code for discrimination. I'm demanding ICE immediately cease this assault on religious observance https://t.co/kTmweXImEk

"ICE has continued to serve these rotten halal meals for over two years even after the detainees notified prison officials that the meals were inedible. As such, Muslim detainees are regularly served meals that they simply cannot eat. Such actions not only violate detainees’ constitutional rights but also put their health and well-being at serious risk," read the letter. "In the face of the Krome staff’s indifference and inaction, Muslim detainees are left with three choices during this pandemic: eat meals that contain pork, eat meals that are spoiled, or eat nothing at all," states the letter. "Consequently, Muslim detainees have been forced to choose between their sincere religious beliefs and their health. Many have suffered illness like stomach pains, vomiting, and diarrhea, as a result."

An ICE spokesperson Nestor Yglesias denied the claims. "Any claim that ICE denies a reasonable and equitable opportunity for persons to observe their religious dietary practices is false," said Yglesias. The Border Patrol’s "Religious Sensitivity" policy states that officers and agents to "remain cognizant of an individual’s religious beliefs while accomplishing an enforcement action in a dignified and respectful manner." ICE has a history of violating the religious right of detainees including seizing their holy books. Sikhs, Hindus, Christians, and Muslims reported violations by the border patrol, reported ACLU.

"Unlike some of the countries from which these individuals are fleeing, the United States was founded on the belief that everyone is entitled to religious freedom. ICE and Border Patrol must stop making a mockery of our most cherished principles by denying immigrants the fundamental right to practice their faith," the ACLU wrote in a letter to the Department of Homeland Security.