After Wife With Dementia Dies, Husband Writes To Hairdresser: 'Haircut Was Her Last, Best Moment'

The man's wife had dementia and he was touched by the kindness and care the hairdresser treated his wife with. 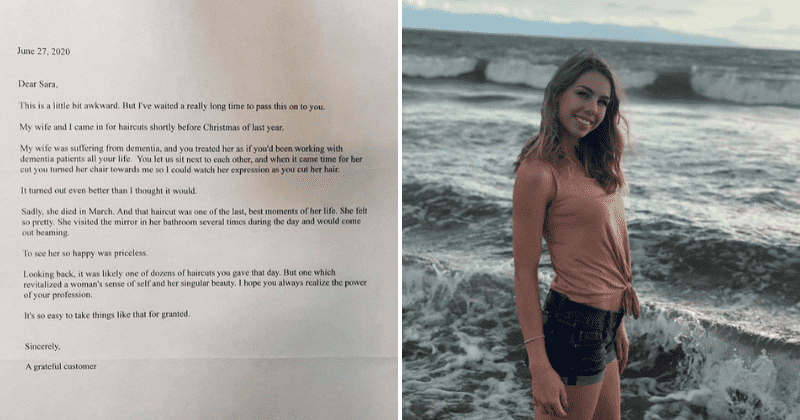 Living in quarantine has certainly given lot of us less time to care to our appearance. Not being able to go out to social gatherings can often leave you with a hair that is due for a trim for weeks if not months. There were still those who decided to protest the rules and demand that salons be open again. As with most other debates that have started after the pandemic, the question of public safety was being brought into question. One of the things that have come out strongly in these debates is that this is a time where we can really appreciate the effort that workers such as hairdressers, nail technicians, masseurs, waiters, and so many others put into their work.

In a heartwarming gesture done recently, a letter written by the husband of a satisfied customer was sent to a hairdresser Sara Verkuilen. The letter thanked the lady for the job she did on his wife's last haircut. According to Bored Panda, the letter read: "Dear Sara, This is a little bit awkward. But I’ve waited a really long time to pass this on to you. My wife and I came in for haircuts shortly before Christmas of last year. My wife was suffering from dementia, and you treated her as if you’d been working with dementia patients all your life."

The man talked of the hairdresser's care in how she treated his wife. The letter said: "You let us sit next to each other, and when it came time for her cut you turned her chair towards me so I could watch her expression as you cut her hair. It turned out even better than I thought it would. Sadly, she died in March. And that haircut was one of the last, best moments of her life. She felt so pretty. She visited the mirror in her bathroom several times during the day and would come out beaming."

Just a haircut? An actof kindness that meant the world to this couple

The letter added: "To see her so happy was priceless. Looking back, it was likely one of the dozens of haircuts you gave that day. But one which revitalized a woman’s sense of self and her singular beauty. I hope you always realize the power of your profession. It’s so easy to take things like that for granted. Sincerely. A grateful customer.”

My mam has dementia and lives in a care home. It's small, family-run. Sometimes she recognises me, sometimes not. But once a fortnight they trim her hair, paint her nails. She loves it. pic.twitter.com/Ec5gC7Gou3

"I cried when I received the letter like mostly everyone else has. I had been struggling with my career, feeling uninspired so receiving that letter reminded me why I do what I do,” Sara told Bored Panda. She found out much later that the man's wife was living with dementia.

“I have no experience with dementia whatsoever. I just try to treat everyone that sits in my chair with basic human respect. My advice for other stylists would be to just treat them as you would any other client. Sometimes things take a little longer and it’s tough in our career because time is money but hairstylists are a special breed of people. We often do it for the passion more than the money,” she said.

The respect and care that Sara showed the couple during their visit really moved the husband and he was determined to express his admiration for the same. Sara, meanwhile, said: “I remember just how sweet they were together. He was a very loving doting husband. They were adorable.”.

“I was out of work due to COVID-19 for a few months and the company I work for went bankrupt and almost closed my salon forever so it was a wild rollercoaster of emotions. Luckily I had a family friend take me into her salon for a few weeks until my salon opened back up,” she said.