The two women still have an "adrenaline rush" from the incident. Thankfully, they weren't hurt in any way. 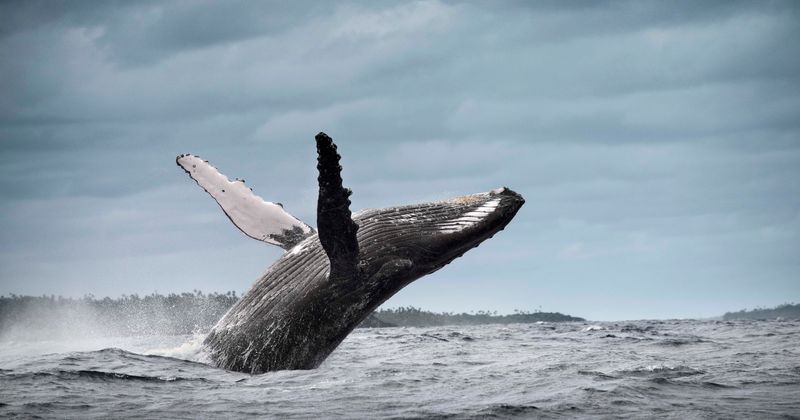 Now here's a whale of a tale! A day of whale-watching turned pretty frightening for two Californian kayakers off the coast of Avila Beach. Julie McSorley and Liz Cottriel were in for a shock when a humpback whale with its mouth agape surfaced underneath them as they were kayaking. In a scary video, the two were seen sitting in a yellow kayak when suddenly, their boat gets lifted out of the water by the massive mammal. Onlookers cried out in shock as someone off-camera can be heard saying "oh s—!" Fortunately for everyone, the two surfaced shortly after.

That footage is amazing! So glad both women are okay & love the comments they made.

The two kayakers shared the story of the terrifying experience. "I still have an adrenaline rush!" McSorley told Fox 26 News, on Monday afternoon.  "I saw the big pool of fish, the big bait ball come up out of the water. I saw the whale come up," McSorley said. "I thought, 'Oh no! It's too close". Cottriel said: "The whale was right here in my face, literally". McSorley was recording the experience on her cell phone. "All of a sudden, I lifted up, and I was in the water," she said. "I'm thinking to myself, 'I'm gonna push. Like, I'm gonna push a whale out of the way! It was the weirdest thought. I'm thinking, 'I'm dead. I'm dead.'" Cottriel, however, thought "it was gonna land on me". She added: "Next thing I know, I'm underwater." First McSorley surfaced, and then she waited for Cottriel to surface as well. Other paddleboarders and kayakers rushed to their aid, concerned that the pair had been bitten by the animal. McSorley confirmed that the kayak was not actually in the whale's mouth. "They thought the whale had the kayak in its mouth," McSorley said. "We got back to the car, I was shaking my shirt and a bunch of fish came out of my shirt," Cottriel said.

The experience may have seemed so scary but the two managed to come out of the ordeal unscathed. However, they did lose a pair of car keys. Which is small in comparison to how wrong things could have gone. The two still appreciate the beauty and magnificence of these huge creatures of the sea. "I was infatuated by them and in awe," Cottriel shared. "But I never expected one to be right here, in my face!" Kellie Balentine shared the video on Facebook with many reacting to the shocking encounter. Amanda Sutcliffe joked:
Not everyone can say they have been in a whales mouth before! Justin Martinez shared: That almost happened to us yesterday! Came out of nowhere. They missed us by less than a foot. Went traveling backwards and all. Crazy! Autumn Skye Maciel wrote in awe: Wait...I didn’t realize it snapped someone up in the air holy shit. Kellie responded: haha yes girl that's the crazy part!!! Bretney Riffle-Padilla noted: I’ve watched this way too many times. You all Were so calm. A elderly woman tapped My car window today and I yelled. So loud out of fear. I would have been screaming at the top of my lungs because of fear. Vanessa Kameron quipped: Your “oh shit” cracks me up. Kelly Reed pointed out: At least it’s a whale and not sharks! Thankfully they needn't have worried. CNN reports that Humpback whales typically feed on krill and small fishes, as per the National Oceanic and Atmospheric Administration (NOAA). The NOAA stated that "humpback whales are often found close to shore and active near the surface, they tend to be popular whale watching attractions. There are several areas where US-managed stocks of humpback whales are the center of whale watching industries, including: The Gulf of Maine (particularly within the Stellwagen Bank National Marine Sanctuary), the southeastern US and West Indies, California, Alaska (particularly southeast Alaska), and the Hawaiian Islands."

Wow this is on my bucket list to get swallowed by a whale https://t.co/d3EOndUJqc