trending celebrity people lifestyle news animals
Mini Horse And Goose Are Best Friends Who Refuse To Be Separated, So They Get Adopted Together!

Mini Horse And Goose Are Best Friends Who Refuse To Be Separated, So They Get Adopted Together!

A miniature horse and an overprotective goose who were rescued from a local farm are the best of friends, and have found a home together. 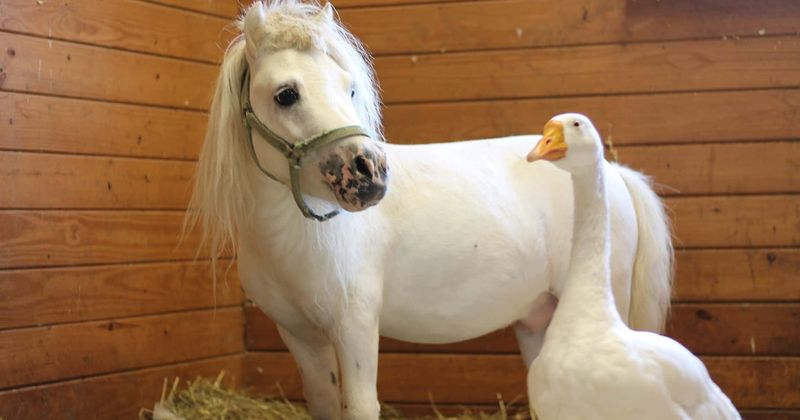 Today's dose of wholesome interspecies friendship comes via the Bucks County SPCA in Pennsylvania, where Waffles, a 6-year-old miniature horse, and Hemingway, his overprotective goose friend, were brought after an animal rescue operation. The inseparable pair were rescued in July from a local farm with "really filthy conditions", where the horse had very limited clean water and no adequate shelter for the winter. After being treated, the pair was soon put up for adoption by the Bucks County SPCA with only one condition - the adopter had to take them together. "Their body language made it obvious that they're friends and that they better stay together," said Bucks County SPCA spokesperson Cindy Kelly.

Waffles and Hemingway were put together in the same stall after being rescued from the farm, and their already established bond just grew stronger. “Hemingway the goose had his head and his neck leaning on Waffles," Kelly recalled noticing one day. “It’s very evident when you’re in the stall with them that you don’t get in between them," she said. And Hemingway goes to any means to protect his equine friend from anyone he considers a threat - even if it's the doctors trying to treat the horse. "Hemingway can make kind of a fuss — slap his wings, honk at you — if he feels you’re going for Waffles," Kelly said. "It makes it kind of challenging for the medical team.” Shelter officials posted a photo of the BFFs on social media, explaining that they'd be up for adoption, and the calls started pouring in instantly. “We’ve definitely had a lot of interest," Kelly said, adding that on Friday morning, the shelter received dozens of calls from people wanting to adopt. "They’re obviously really charming.”

Thanks to the enormous amount of attention the story received, the BCSPCA received over 150 adoption applications over the last week, and all the while, Waffles and Hemingway continued to bond. “We just had Waffles out for a walk, and Hemingway gets a little bit worked up," Kelly told The Philadelphia Inquirer yesterday. “When Waffles is brought back into the barn, the first thing he does is drop in the hay and roll around, and they just seem more relaxed and happy." And now, the unlikely best friends have found a new forever home together. Waffles and Hemingway left the BCSCPA barn on Wednesday evening for their new home with their adopter, a Philadelphia-area woman who works at a veterinary office and has experience working with large animals, Kelly said. The spokesperson added that the adopter, who wished not to be identified, was chosen because of her proximity to the shelter and because she had the resources to be able to care for larger animals.

"We will miss them, but we couldn’t be happier for this special pair," SPCA officials wrote in a Facebook post announcing the happy news. "They went home with wonderful adopters who are experienced with horses and have a variety of farm animals waiting to meet Waffles and Hemingway."