Nicola Coyle established The Grey Muzzle Canine Hospice after witnessing the terrible ordeal of pets being dumped by their owners. 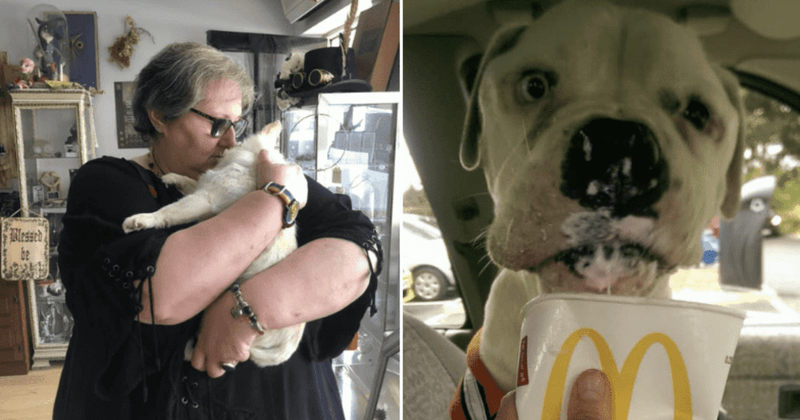 It's tragic how many senior dogs or terminally ill pets are abandoned by their owners during the last leg of their already short life. It's truly heartbreaking to say goodbye to one's pet and not everyone can handle taking care of them during that time. However, just leaving them to fend for themselves is the worst possible thing one can do. Thankfully, one woman has taken on the responsibility to make their final days memorable, without feeling any distress.

Nicola Coyle, a retired nurse in Nottinghamshire, is the mind behind the brilliant idea of hospice care for our canine friends. Coyle, who used to work at a dog rescue, established The Grey Muzzle Canine Hospice after witnessing the terrible ordeal of pets being dumped by their owners. She takes in abandoned senior dogs, strays, and the ones who are terminally ill. According to Bored Panda, the kind-hearted woman runs the animal shelter from her own home in Mansfield, Nottinghamshire. What's more, it is Britain's very first hospice for dogs.

Through this hospice, she not only ensured that the pets have a better quality of life but also put in the effort to make things fun before the dogs say goodbye. Coyle, who has ushered in a new era of hope for the animals with her initiative, gives all her rescue dogs lots of love which is something they truly deserve. Daily Mail reports that these dogs usually arrive from various charities, kennels, or vet surgeries, where they are at the risk of being put down within a week if they don't find a home. Once they are in the hospice, the dogs have been treated nothing less than royalty. The mother-of-two also takes on the challenge of checking off things from a "bucket list" in the month/weeks before their death.

These activities include gorging on icecreams on the beach and enjoying birthday parties orchestrated for them by Coyle. For every dog, she keeps a budget of up to £500 ($665.47) which is taken out of her own pocket. Coyle also uses the funds she gets from fundraising to give each dog the best final days possible. "Many have not led a very nice life too, used for breeding or guard dogs, so when they've become unwell, they're not useful anymore and left," she told Mirror. "They just want to feel loved and safe. I really believe they should get a nice ending."

Apparently, the dogs are also treated to steak dinner at the local pub and a trip to the seaside. Some of the dogs also get the opportunity to go to a McDonald's drive-thru, according to ABC News, and even get to ride in a police car. In addition to taking care of several dogs at a time, Coyle also helps look for foster homes for them. The description of the Facebook handle created for the Hospice states, We provide end of life care for abandoned dogs. We take only dogs that are from UK pounds that have been deemed as having less than six months to live. And she gives these dogs all the love.

"The longest I had one is one year, the shortest was two weeks. It's so rewarding when you can make those times special," she said. This just goes on to show how love can change and lengthen one's life span as many terminal animals live much longer than the set period of time they are given to live, reports Animal Channel. "I don't know when their birthdays are so we throw all of them a birthday party. They just want to feel loved and safe. I really believe they should get a nice ending," she said.