Botswana lifted the ban on hunting elephants in May and since then there has been a spike in the number of elephant carcasses found around the country. The picture of an elephant with its head chainsawed into half was taken by a South African filmmaker 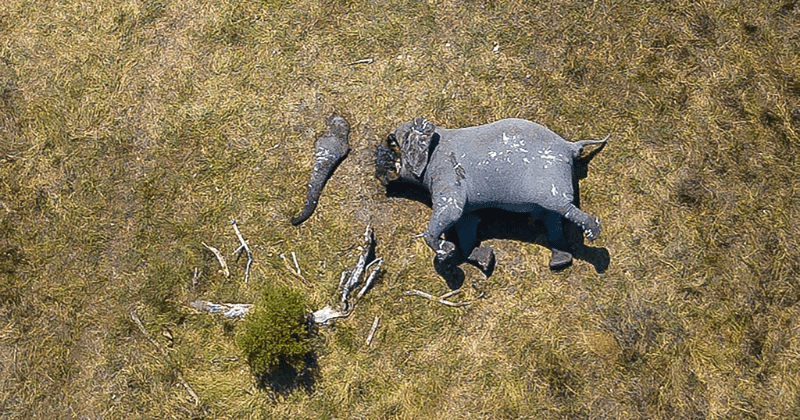 Animal poaching is going on a rather scary scale in Africa and yet most people in the world are not even aware of the horrors that animals have to face and the extent of the damage it is wrecking in wildlife. A very disturbing picture of a heavily mutilated corpse in Botswana has emerged which the photographer believes will surely shock people and governments out of their lull and fast track efforts to speed up conversation efforts. He also hopes it will also bring about better laws to protect these majestic animals. According to The Sun, Justin Sullivan, 28 who took the photograph from a drone said, "This specific elephant was slaughtered in an extremely inhumane manner." He is from Cape Town in South Africa.

The gory photo shows an elephant lying on its side with its head cut into half and the portion with the tusk separated and thrown near it.  Sullivan added, "The photo represents just how isolated and disconnected not only the elephant was in that moment, but how disconnected we are from the situation." He had heard of the dead elephant from some rangers talking about the carcass while he was in Botswana for a film project.

Are we even human anymore? pic.twitter.com/usm3x3v4Ag

Just seen the article in the news about that poor elephant in #Botswana .. genuinely don’t know how anyone could do that to a defenceless animal 😢 they should never have lifted the ban on hunting!

“They said an elephant had just been poached and I asked to be taken to the site. On arrival, I used a drone to capture the image. The image is called ‘Disconnection’, the perspective of the image gives context to the situation which you would never be able to see from the ground. People have obviously reacted with mixed feelings of anger and sadness, especially with the recent lift on the hunting ban in Botswana, but this photo has driven some constructive dialogue around how we can promote more sustainable elephant conversation and solve our current ecological crisis,” said Sullivan.

Elephant Poaching Is on the Rise in Botswana, Study Confirms https://t.co/iPgkoESFAn

Horrific, deeply upsetting but one can only hope iconic in it’s potential to powerfully & positively effect change.
An Elephant slaughtered by poachers in Botswana.

While this is not the first elephant death, the manner in which the elephant was killed has definitely left a lot of people in complete disbelief.  The main reason for elephants are still being hunted is due to a huge black market that exists in Europe and Asia where tusks and other elephant parts would easily fetch several thousand dollars. Around 30,000 elephants are killed globally every year, with Botswana being one of the main places where this happens. With the government lifting the ban on hunting elephants just this May the problem has magnified.

Sad to say Botswana have reintroduced ivory poaching, in May.. it was quietly done. But they are making up for lost time.. leaving elephants dying and maimed. They are intelligent, beautiful, majestic animals that deserve to be cared for by humans... https://t.co/XGVHcuyuJz

Between 2014 and 2018,  the discovery of elephant carcasses rose by 600 percent in the country. According to National Geographic, Botswana is home to as many as 130,000 savanna elephants which accounts to roughly around a third of Africa’s remaining elephant population. Mike Chase, director of Elephants Without Borders, a nonprofit based in the country said, “We have a significant poaching problem—let’s deal with it. We were warned by conservationists in other countries that the poachers would eventually come down to Botswana, and now they’re here.”

In 2014, Chase carried out a survey where his team saw no significant elephant poaching in Botswana. But in 2018, there were 156 fresh or recent carcasses in five areas whose skulls had been cut open and the tusks removed. Many of these were hidden under bushes which points to the fact that the animals were victims of the illegal ivory trade said, Chase. His organization believes that 385 elephants were poached between 2017 to October 2018. This, Chase says, should be seen as a call to action.