The puppy was only four months old and could barely move because of fear and poor health as he suffered from symptoms similar to rigor mortis. 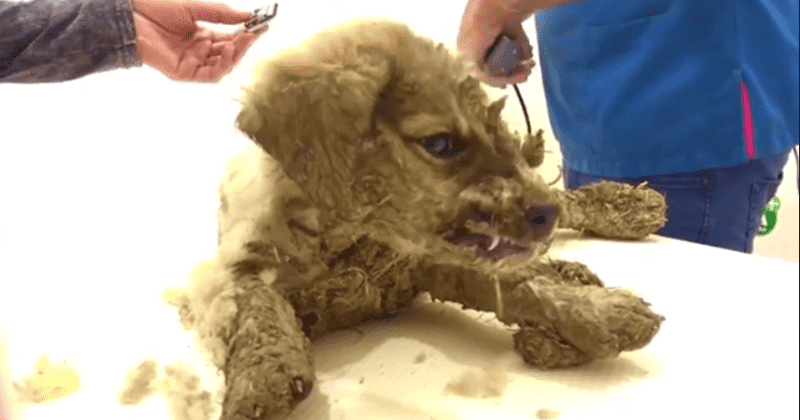 In a disgraceful incident of animal abuse, a group of cruel children left a stray puppy for dead by dragging it through mud and covering it in industrial glue. Pictures show Pascal the puppy living through the horrible condition and looking absolutely terrified after being subjected to unwarranted brutal torture. According to Daily Mail, the puppy was only four months old and could barely move because of fear and poor health as he suffered from symptoms similar to rigor mortis. The incident took place near an industrial estate in Istanbul, Turkey, and the puppy is presently being looked after He'Art of Rescue, a local charity.

As per reports, children put so much glue on the dog that it acted like cement, with one of the ears becoming necrotic as the blood supply was completely cut off. The puppy's skin was said to be heavily damaged after festering in strong chemicals contained in the glue and it had to undergo several medical baths to help him with recovery. Luckily, after his rescue and rehabilitation, Pascal is said to be recovering amazingly well with many saying he is unrecognizable and that he's become friends with another puppy.

In spite of the torment the children put him through, he was reportedly very calm when vets worked to care for him by removing the matted fur which had bonded with the glue. At first, the pup was suffering from an infection called canine virus parvo but is said to have beaten the infection after undergoing weeks of treatment. As per Daily Mail, Nur Rima Yola, founder of He'Art of Rescue said: "Pascal was in a miserable state when I first saw him inside that box. He was not moving, he had frozen, very scared, and very traumatized. After the glue has been removed, he stood in shock for one day. He was even turning his back to hide when he saw people. He is doing better, slowly getting used to the staff in the clinic where of course love is being poured towards him. He especially bonded with one of the doctors who are in charge of him, Hasan Akin. They are best buddies."

Although most people aware of the story wrote off Pascal, medical staff working on him and people at He'Art of Rescue worked to help him recover before finding him a new forever home. The canine has even picked up several fans from across the world from watching videos of him online. The organization that rescued him is dedicated to rescuing cats and dogs in similar situations and is requesting help to continue their work of rehabilitating other animals. Yola continued: "We know his soul will mend in time and the adoptive family will play a major role in this. Our medical team is doing everything for him." The non-profit is known as one of the best animal hospitals in Turkey but is in need of donations to help cover Pascal's expensive medical bills.

The world is filled with vile humans who abuse innocent animals to satisfy their sadistic needs. In an incident from September last year, a woman appears to torture a small puppy by stubbing out a cigarette on its eyes and face. Although the sadistic video is enough to any our skin crawl, it is suspected to have been created by "syndicates that profit from animal torture films." An animal welfare organization in Singapore is now appealing to the public for any information regarding the woman's identity and whereabouts. According to a report by Daily Mail, the disturbing video shows the heartless torturer calmly smoking outside a house before picking up the puppy by the neck and repeatedly stubbing the burning cigarette on the animal's eyes and face. Although the helpless puppy could reportedly be heard trying to cry out in pain, its yelps are stifled by what appears to be tape holding its snout shut. People were outraged by the incident and began circulating the woman's face to find her identity and bring her to justice.