The young boy was learning a popular TikTok dance alongside his sister. 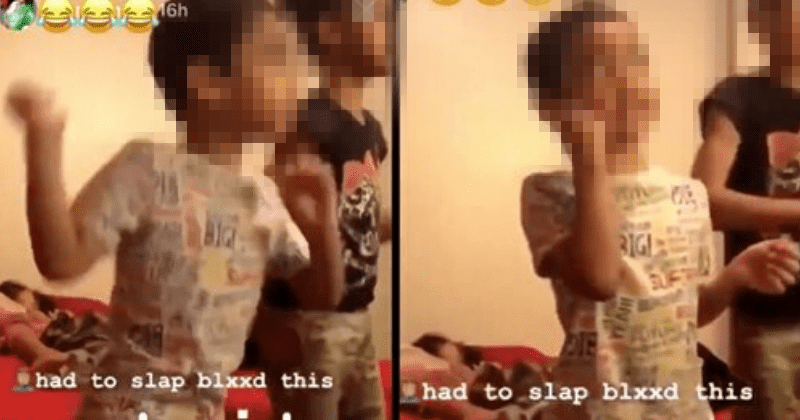 There is nothing more maddening than watching an adult abuse an innocent child, for just being a child! A video of a young boy trying to learn a dance routine of a popular TikTok video along with his sister was posted as an Instagram story. It quickly went viral and garnered over 8 million views.

The little boy who was seemingly enjoying himself was met with a tight slap from a vile, homophobic woman. She filmed the little boy and can be heard saying, "You don’t do that s**t! F**k wrong with you? Gay a** b***h!" The video was captioned: Had to slap blxxd this not it. It was posted to be "funny" but the only people laughing were cruel homophobes. The mother of the sweet boy has spoken out since the incident according to Pink News.

Look at his little face. Rubbing his cheek, still trying to smile a little, then the light going out of his eyes and the confusion creeping in because he can't figure out why he's being punished for doing the same thing the other kids are doing.

In this TikTok challenge, the children dance to Megan Thee Stallion’s song "Savage." As little Brandon dances, the woman reaches out and smacks him in the face. Many assumed that the woman was his mother but the person responsible for hitting the child was his babysitter. Her actions have been reported to the police.  The child's godmother also clarified on Twitter to let everyone know the abusive woman was not his mother. According to Parentology, she wrote: My godson comes from a loving home & whether he’s gay or not we love him regardless. We always let him be himself. His mom thought she could trust this person to watch them for 10mins & this happened, she said in an attempt to clarify that the person in the video wasn’t Brandon’s mother.

give me a reason why him being gay is wrong, i’d love to hear your thoughts

The boy’s family notified the police and have released another video to discuss what happened and wanted to clarify things in the clip. "Everybody thinks it’s me and everybody was saying all these negative things about me. You know, I’m not worried about none of that. My son is fine, I know he’s good over here. I know he’s being loved right," his mom says in the video. She also identifies the babysitter as her sister. While the mother said that the police are "handling it," she hopes that this will end the situation and that her kids won’t be taken away. It’s believed that she wasn’t in the house when the horrifying incident occurred.

I never understood why people think they can make their kids or siblings into something like it’s a build a bear workshop? Homophobia should be dead idk why everyone doesn’t know it yet.

Many Twitter users were quick to criticize the video deeming it unfunny and homophobic. Royal Hardcock wrote: This is why there are so many people in the world dealing with mental issues in self-awareness problems please allow a child to be a child and to express themselves freely and it's okay to be yourself it's nothing gay or homosexual about dancing and enjoying music. PG LOCK tweeted: Literally physical & Emotional abuse she did this on purpose . He’s being a KID. I want this hoes address ASAP . I’ll adopt this baby & he can do tiktoks with me  . Volopy added: Hitting kids who we condition not to fight back and defend themselves for no reason instead of talking to them like a human being is abuse idk how else to explain it. And she recorded him as if she isn’t humiliating him for clout. Shit’s traumatizing and he’ll remember that shit.

This is disgusting on so many levels. A child literally doing a dance he sees everyone do on social media gets hit. Plus she watched him for a while just to film him. Sometimes elders may not realize they are becoming their child’s first bully by simply suppressing their freedom

Some people seemed to have lost the plot, trying to sound understanding but still homophobic as ever. Kail wrote: He’s only doing what he’s seeing on tv. Clearly they watching a video
Baby don’t even understand that he’s doing girl moves. Then you slapped him. Smh. Y’all kids be having kids and it’s not cool. As a parent you should be monitoring what they watch, that’s bad on your part . To which Josh replied: you were close, sis. so close. Mwezi agreed, writing, sarcastically: Today I learnt that dance moves have gender. Delicia Silverstone added: She knows that by expecting men to be stoic and violent she's setting herself up, right?

Dancing has no gender. White supremacy did a number on yall.