Nathan is now desperately offering a $300 reward for the return of his best friend. This is a lot of money for a man who does not even have a place to stay. 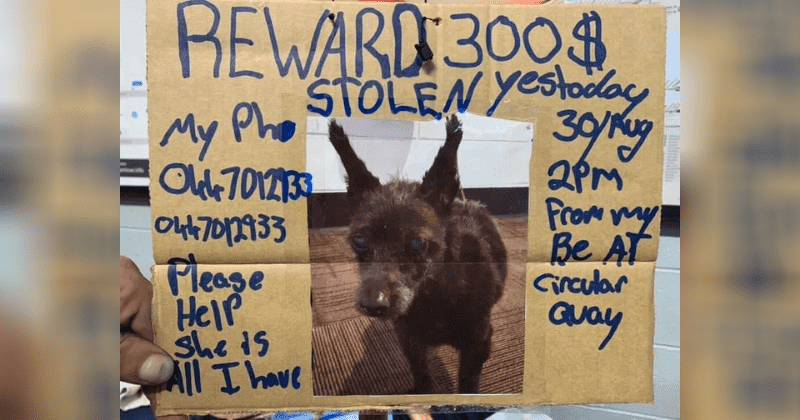 A homeless man in Sydney has had his pet dog stolen away by thieves and is now offering every cent he has for her return. Nathan was heartbroken on discovering that his beloved dog was taken away from him by heartless robbers. This was a dog he had rescued from a bin in Surry Hills, Sydney, in 2019 and nursed her back from the brink of death. The little dog was stolen from Circular Quay on August 30, Arthur & Co. Pet concierge reported on a Facebook post.

Once he noticed his companion was nowhere to be seen, Nathan began to panic and started running around, pleading for help but claimed that he was ignored by everyone, including a police officer. There is little doubt in people's minds that this apathy is due to his social and economic status. "All I could do was sit on my bed and cry," he told Arthur & Co. Pet Concierge. Nathan is now desperately offering a $300 reward for the return of his best friend, who he said has saved his life. This is a lot of money for someone who doesn't even have his own place to stay. Regardless, he is willing to sacrifice even the bare necessities of his livelihood to see Shaggy safe and sound again.

A pet detective has taken on the case of a missing dog in Circular Quay. Nathan, who's homeless, says his four-legged companion Shaggy was stolen while he went to the bathroom on Sunday. https://t.co/TWh1KQycs4 #Sydney #7NEWS pic.twitter.com/IzCM5pgGcg

Arthur & Co. Pet Concierge shared the news stating: "He went to the bathroom for 2 mins on Sunday 30/08/20 @ 2 pm and when he came back she was gone. Nathan started yelling for help but nobody helped.. 'everyone thought I was crazy'. Nathan told me he approached a policeman who promised to come back but never did. 'All I could do was sit on my bed and cry'".

Nathan revealed that he made a promise to Shaggy to always look after her until the day she died. He would frequently go without food so he could provide for her and his resolve has touched us all.  When Nathan first found Shaggy in the bin and close to death, he immediately took her to a vet. He was told that she had been badly abused by the looks of her injuries. However, with Nathan's determination, the vets managed to save the canine. More often than not, Nathan would set aside his own needs so that Shaggy would eat and he would hand feed her quality food as she slowly recovered. "I'm very picky about what she eats. I saved her but really she saved me," he said. Ever since he saved her, the dog has been his companion and the two of them are inseparable.

Anyone in Sydney Australia please help find Shaggy. Nathan rescued this little blind dog from a dumpster last year and she has been stolen. Stealing from a homeless person is despicable. Stealing his only family and friend. This is heartbreaking. Please help pic.twitter.com/6VE3bsV1c9

Even though Nathan did not receive any help at first, the news soon got out and there is awareness being spread on social media for the return of Shaggy. Several Facebook posts like this one have been set up to help reunite Nathan and Shaggy and the news is gathering a lot of local community support. "I pray these two are together again so soon," one user wrote. "I hope she is given back to him ASAP, they need each other," another added. "Two souls united through hardship beyond normal...hoping they can be reunited and help each other," a third user replied.  Meanwhile, Nathan can do nothing but wait on his bed, hoping that somehow, somewhere, they will find his beloved friend and return her to him.

Anyone with information on Shaggy's whereabouts is encouraged to contact Arthur & Co. Pet Concierge.