trending celebrity people lifestyle news animals
Homeless 4-Year-Old Seen Eating A Meal On The Side Of The Road: "Shameful & Unacceptable"

Homeless 4-Year-Old Seen Eating A Meal On The Side Of The Road: "Shameful & Unacceptable"

The image sheds light on the tragedy surrounding the crisis of homelessness. 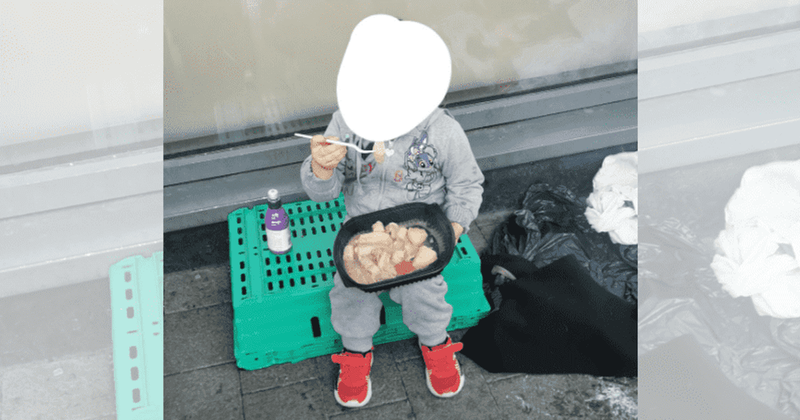 It's hard to imagine a life where you don't know where your next meal will come from or how you will survive without a roof over your head... A place to call your own. Now imagine being a child who has to go through this? A heartbreaking image of a four-year-old homeless girl eating dinner from a plastic container on the side of the road has gone viral. The picture is a tragic reminder that homelessness is still a serious reality. A volunteer at the Ballymun Soup Run in North Dublin captured the image which was shared on the organization's page where the captioned the image: our government are to blame for this. They added: It's so normal that they pop down for dinner it's sad. No cooking facilities what option has mammy got, chippers are bad everyday for young children. And not cheap either. It's sad.

In a society with so much wealth - albeit concentrated at the top - no child should EVER have to go without shelter, and food. The damage - both physical and psychological damage is unimaginable.

The image did the rounds on the Internet and finally reached Tony Walsh, the co-founder of Feed Our Homeless. He also posted the photo on social media and called it "shameful and totally unacceptable" before slamming the Irish government over the housing crisis, saying "This photo of a young child eating her dinner sitting on a crate on the streets of Dublin is certainly shameful and unacceptable. No child or any individual should have to sit on the streets like this eating their dinner because they have no place to call home. Shame on our Government. When will enough be enough? Ireland is one of the wealthiest countries in the world. We should not have a housing and homeless crisis like the one we have.”

This Photo of a young child eating his dinner sitting on a crate on the streets of Dublin
Shameful & totaly unceptable.

No child should have to sit on the streets like this eating three dinner simple because they have no place to call home .Shame on our government. pic.twitter.com/mejLi0BdaD

According to Dublin Live, the latest statistics from the Department of Housing imply that there 8,238 people homeless in Ireland. Out of this number 2,264 are homeless children The volunteer who took the heartbreaking photo of the little girl said she had “no words”. “Our Government should hang their heads in shame.A four-year-old baby and one of the only places they have to have a home-cooked meal is our team? These children should have a kitchen table to sit at and have dinner, not on the ground on a crate at our soup kitchen."

Internet users were left heartbroken by the picture. Leandra Morris wrote: Ah god poor kid .... very sad to see kids and their parents in such dire circumstances. None of us far from being in this position .... just takes people to loose their job and home to end up with nothing. Korina Duffy explained: For all the people who are commenting " I blame the parents" I have seen first hand hard working mums having to leave the family home during Covid due to domestic abuse. These women have to resort to homeless hotel accommodation. The homeless hotels are FULL to the rim with not just unemployed people? Actual hard working mums trying to keep their kids safe. Una O'Shea added: This is heartbreaking to see. Thank god she and her family are getting good nutritious food while they are in emergency accommodation. I hope it makes their situation a little bit more bearable. Really hope they get proper housing soon. In the meantime , well done to these volunteers who make sure they are fed well.

I cannot begin to express how angry this makes me feel. A little child, or anyone, homeless and eating on the street. It is not acceptable, it never was and it never will be

Back in November 2020, a spokesman for Minister for Housing Darragh O’Brien said the Minister acknowledged numbers enduring homelessness were “simply too high”, reports The Irish Times. “In particular, he recognizes the growing number of single adults in emergency accommodation and wants to see a greater emphasis on the delivering one-bedroom social homes . . . The program for government commits to expanding the Housing First approach with a focus on the construction and acquisition of one-bed homes and the provision of relevant supporting services.” Back in America, the issue of homelessness is just as big a concern. Homelessness-related deaths are on the rise. According to Time,  the Department of Housing and Urban Development reported US homelessness at 580,466 people, which has increased to 7 percent from a year even before the pandemic lockdowns. “Our homeless community found themselves being told to stay entirely outdoors,” said Kate Marshall, a charity worker in Wheeling, a city in West Virginia's northern panhandle. “There was not one indoor place to go from March until fall of 2020.” Now amid the pandemic, things seem to be even direr.

Deaths among America's homeless are soaring in the pandemic. A photographer captures a community In crisishttps://t.co/Twd4LAXF1F